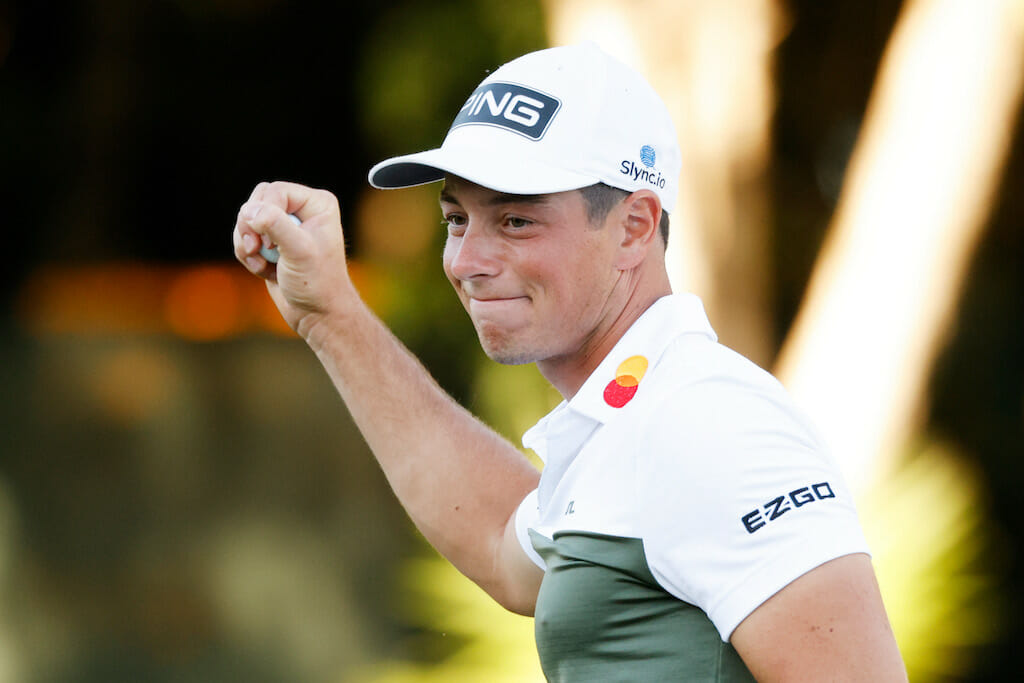 A week that began with a near-disaster finished with a four-stroke win for defending Mayakoba champion Viktor Hovland who can now count himself as a three-time PGA Tour winner.

Hovland found himself making headlines before the tournament for the wrong reasons. Bashing balls next to Danny Lee who was partaking in a bit of speed training on the range, Hovland handed over his own driver to see if an extra inch would make much difference to Lee’s numbers. One swing later and Hovland’s gamer was returned to him, shattered in three places.

Without a spare, James Hahn was able to loan Hovland a driver with similar specs to his own and the Norwegian refused to skip a beat, tying second in driving accuracy in a week that might’ve got away from someone less accepting than the level-headed 24-year old.

“Obviously when something like that happens, you just kind of go, ‘oh, man, come on, like really, is that gonna happen?’,” Hovland said.

“But then I was able to get over that pretty quickly as soon as I played a driver that was really good. I didn’t feel like I was giving up anything to the rest of the field and I was able to plot my way around.”

Hovland’s third PGA Tour victory, and fourth worldwide having won the BMW International Open on the European Tour this year, could yet prove a milestone moment for the new world number 10. A major champion in the waiting in most people’s eyes, his Mexico win proved to Hovland that he can convert a commanding 54-hole lead with relative ease – a front-running trip to the winner’s enclosure that should stand him in good stead for bigger assignments to come; not least because Hovland feels he did it without his best stuff.

“I slept great, but I woke up really early this morning and I was pretty nervous and excited to get going,” he said.

“To be able to kind of sleep on the lead and go out in the conditions early on today, because it was blowing pretty hard on the front nine. Frankly, I did not play well at all the front nine, but I was able to hang in there and make a lot of good putts. I was really happy to be able to just kind of pull off the round that I did today without having my best stuff.”

And if Hovland needed any extra motivation as he picked apart El Camaleon Golf Club, the sight of 15 or so compatriots decked out with Norway’s finest flags and colours who made the trip to Mayakoba to cheer on the defending champ certainly provided it.

“The Norwegian people are very patriotic and it’s cool to see that I can get so much support even in Mexico, which is pretty far away from Norway. They were great,” said Hovland, who became the fifth consecutive international winner on the PGA Tour.

“They applauded good shots and obviously cheered a little bit extra when I made a putt. It was really nice. I want to thank them a lot.”

Hovland’s 23-under par tally beat home favourite Carlos Ortiz into second place by four strokes with Justin Thomas taking third at 18-under par. Seamus Power tied-11th place after a closing 68 for a 14-under par tally.