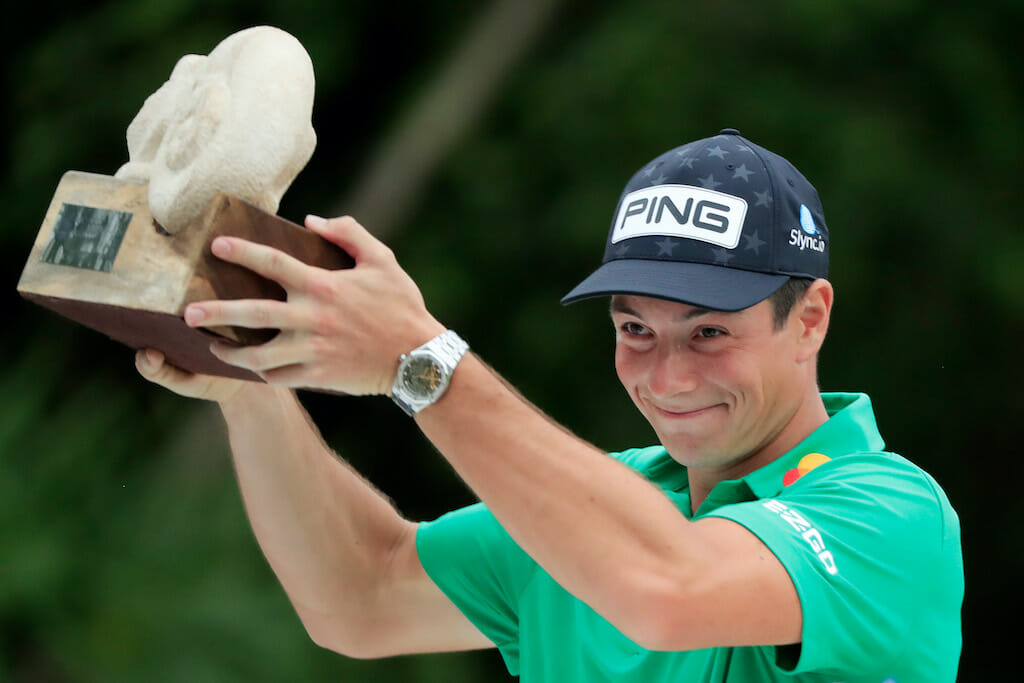 Defending champion Viktor Hovland will be the main attraction as Shane Lowry returns to action and Graeme McDowell and Seamus Power look to continue their momentum amongst a quality field at Thursday’s starting World Wide Technology Championship in Mayakoba, Mexico.

Hovland returns for a fourth PGA Tour visit to El Camaleón Golf Club and a fifth in his career having also contested a World Amateur at the favourite Mexican golfing haunt. Last year the then 23-year old sunk a 10-foot birdie putt at the 72nd hole to the dismay of Aaron Wise but even after a commanding 63-65 weekend en route to that victory, the Norwegian feels like an even better player ahead of this week’s test in Playa del Carmen.

“I’d say I’m a bit more seasoned,” said Hovland, who was an integral part of Padraig Harrington’s European Ryder Cup team as a rookie in September.

“I’ve got a bit more experience, played a few more major championships, being part of a Ryder Cup. I just feel like I have a better understanding of myself and my own game and just being kind of comfortable doing what I’m doing.

“Even though I haven’t maybe put myself in as many places to win tournaments since then as I maybe would have liked, but I feel like I’m definitely handling the pressure in the moment a lot better. I remember last year I was so nervous coming down the stretch. Now, I was still able to pull it off, but I was really nervous and I feel like now I’m handling that a lot better.”

Already a three-time Tour winner, twice on the PGA Tour and once in Europe, the world number 17 is hungry for more titles but even after his early success, Hovland knows they won’t come easy.

“To already have three worldwide victories as a pro is pretty crazy,” Hovland admits.

“I feel like I played some great golf throughout my career so far, but it’s still hard to win, and you’ve got to make the right putts at the right time.

“Been very pleased with how I’ve finished off certain events. If I’ve had to make a putt, I’ve done it on the last hole to win, which has been very special. Hopefully I can keep doing that and maybe even win a bit more. Always trying to improve and, yeah, hopefully keep improving.”

Shane Lowry would attest to the difficulty of winning on Tour yet although it’s been over two years since his Open triumph at Portrush, the world number 42 has been the model of consistency across both tours this year.

On the PGA Tour last season, Lowry played in 21 events, making 19 cuts and enjoyed 10 top-25 finishes. That form saw the Offaly man through to the playoffs and ultimately the BMW Championship where a final round 65 for a tied-26th finish in August saw him sign off on a brilliant campaign that banked him $2,636,597 on America’s tour.

The competitor inside Lowry would undoubtedly be wanting to enter the winner’s circle in the weeks ahead and after shaking off any rust with a final round 64 a fortnight ago at the CJ CUP, he’ll hope for more progress on his second outing of the wraparound season.

“This week is great preparation for next week down in Mexico for the World Wide Technology Championship at Mayakoba where I won (2015),” said McDowell. “This finish is also a good start for an important four weeks for me as I want to start this little run of events the right way and I’ve done that.”

Having played three rounds together on the Port Royal course, each player collected $129,025 for his week’s work with McDowell jumping 89 spots to 86th on the early FedEx Cup standings while Power jumped up 43 places to 51st and also moved back inside the world’s top-100.

And given it was the first time GMac and Power shared the same fairway, 2010 US Open champ McDowell came out of the week predicting plenty of success for Power.

“Seamus is the archetypal PGA Tour player,” he said. “He drives it exceptionally well and has a very tidy short game. I really feel he has a long career ahead of him on the PGA because of those two very strong facets of his game”

The action in Mexico gets underway on Thursday – Full scoring HERE