No separating GMac and Power after two rounds in Bermuda 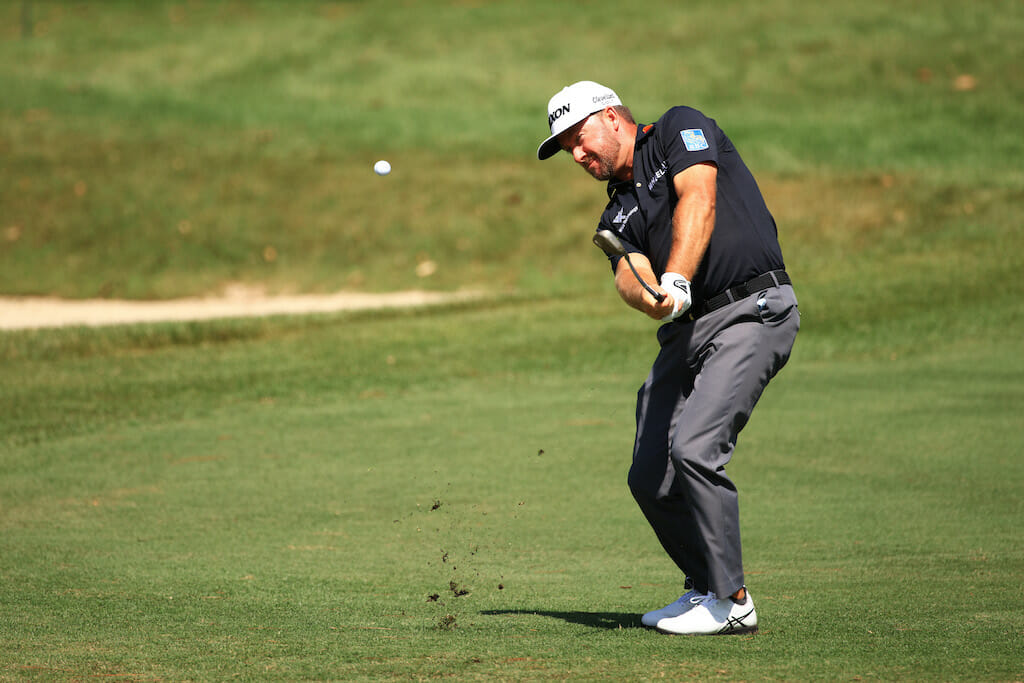 There was no separating the Emerald Isle duo of Graeme McDowell and Seamus Power after two rounds of the third edition of the Butterfield Bermuda Championship.

McDowell and Power were out together for a first time in formal competition on day one and after two days and 36 holes in each other’s company, the pair head to the weekend round locked together at five-under par.

‘GMac’ snatched six birdies in a second day four-under par 67 to move to five-under par in the €5.5m on the exposed clifftop Port Royal course in Southampton.

Power, who had produced a superb 67 in Thursday’s tougher conditions, fought back from a 10th hole double-bogey to produce a three-hole run of two birdies and then a 16th hole eagle ‘3’ in his one-under par score of 70.

The duo ended the day sharing 16th place, six shots adrift of Canadian Taylor Pendrith who set a new tournament course record of a 10-under par 61 that included an eagle and nine birdies plus a lone bogey to head to round three at 11-under par and a shot clear of American Patrick Rodgers who eagled the same hole as Power in producing a seven-under 64.

Those like McDowell and Power, out in the morning, were greeted with far friendlier conditions with the wind nudging 15-20 kph compared a day earlier when wind gusts were touching 35 to 40 kph while the likes of former Irish Open winner Russell Knox, out early on day one, also endured three heavy downpours.

Those out in the opening half of the draw on day two were averaging 69.1 shots a round compared to Knox and company who averaged 74 and three-over on Thursday morning.

“The golf course today went from being ‘abusive’ on Thursday, and I have never used the word ‘abusive, while today there is a score of 60 out there as that is the difference in the two days,” said McDowell.

“Someone could tear this place apart as it is very benign and it is probably as flat calm, I would imagine, as you will get here in Bermuda.”

McDowell and Power were out from the tenth with McDowell picking-up birdies at his first and third holes. He dropped a shot at his fourth before adding birdies at eight and nine to make the turn in three-under.

McDowell then birdied his 10th ahead of six pars and ending bogey and birdie.

“What I found very unusual is that we practiced in two of three days wind and today is goes flat calm,” he said.

“It was actually unusual hitting normal shots. I stood-up on the third hole today which was my 12th and I had the most easy 8-iron I’ve had in my life and I didn’t actually know what to do as everything has been like trapped for three days, and I ended-up hitting a pretty bad shot so I kind of had to reset everything to get my normal swing going again. It was just kind of weird.”

Power kick-started his round from the 10th before making the turn at level par after a seventh hole bogey and a then a birdie on his eighth before struggling to get to the green in ‘5’ at the par-4 first hole or the 10th of the round and then one-putting for his double-bogey ‘6’.

The reigning Barracuda Championship title-holder then regained the lost shots with birdies at his 14th and 15th holes ahead of his eagle at his 16th or the par-5 seventh on the scorecard.

Power then bogeyed his penultimate hole ahead of closing par to book his place into the weekend rounds for a fourth of five events on the new 2021/22 wraparound Tour schedule.

“It was a bit of an up-and-down day for me today as I made one bad mistake on the first, which was my 10th, and had a bit of a cold putter,” said Power.

“I had a decent finish to get myself back into a decent spot.

“I shot one under today and I’m a bit disappointed whereas one-under yesterday was a good score. The wind has died down a lot. It’s still there and they’ve stretched a couple of the par threes because the wind is down. So the course is still a good test but obviously a lot easier than it was yesterday morning

“So overall, a little bit disappointed but I’m still in a good spot going into tomorrow.”

And having grown-up in windy conditions back home in Waterford, Power was asked if he considers himself a good wind player.

“Yeah, I always do okay in the wind. Growing up in it, you develop not tricks but do you know what to do in most situations,” he said.

“That definitely helps and I’m trying to utilise it as best as I can.”

While Power joined McDowell for lunch in the clubhouse, he also singled out his prior experience of contesting two Bermuda Championships, where he finished T16th in the inaugural 2019 event and T11th a year ago, as being very helpful with two rounds to play this year.

“Having previous experience here definitely helps. I noticed a couple of spots today where I could use past experiences and it helps,” said Power.

“It’s like any golf course I guess but particularly here because we’ve played for the last couple of years with every kind of wind direction so you kind of know what to expect and know what shots work and what shots don’t. It definitely helps so I will try to keep that going over the weekend.”