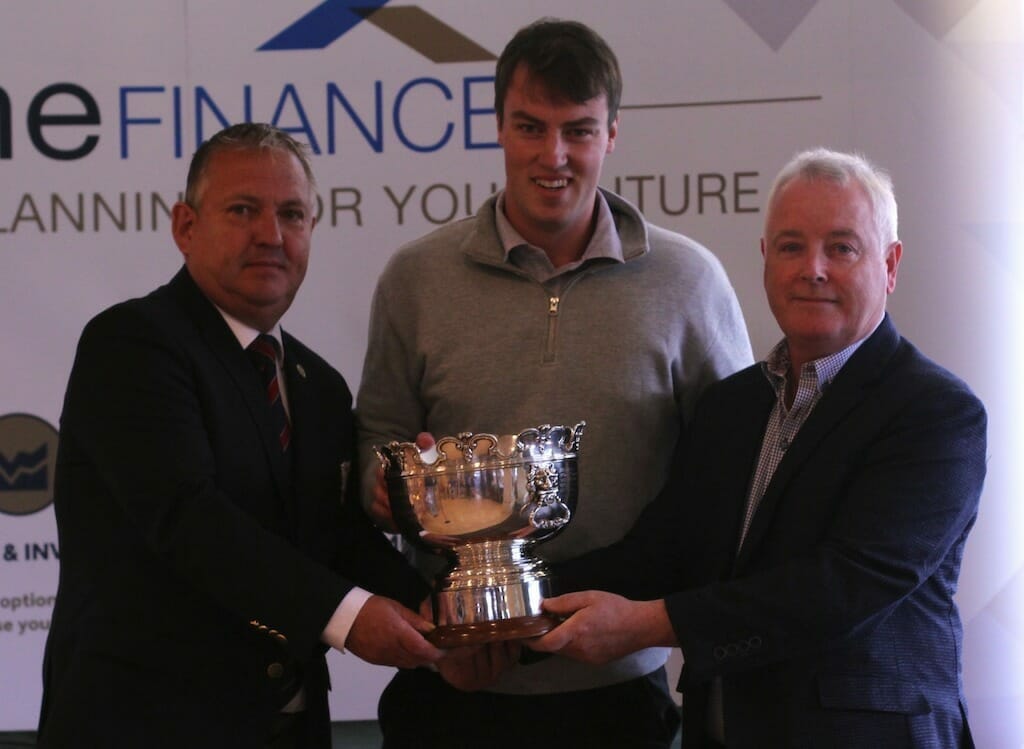 Jack McDonnell won the One Finance sponsored Dundalk Scratch Cup for the first time when he beat local favourite Caolan Rafferty on the first playoff hole after both players had finished the 36-hole tournament on seven-under par.

The 26-year-old from Forest Little, who will make his Home International debut for Ireland later this week, fired a superb pitch into six feet to set up his birdie winning putt and deny Rafferty what would have been his fourth Dundalk Scratch Cup in six years.

Robert Moran from The Castle, who will join McDonnell, Rafferty and Marc Boucher of Carton House, on the Ireland team heading to England for the Home Internationals, finished two shots behind on five under alongside another local, Eoin Murphy, with Dundalk stalwart Aaron Grant completing the top five after coming home in four under.

McDonnell, playing alongside defending champion Jake Whelan (Grange), and starting from the 10th, had six birdies over his opening nine holes with the only blemish being a bogey at the par three 17th, his eighth hole. He did get back to six under with a birdie at the par-5 sixth but handed it back at the ninth, his last, when he bogeyed the par-3.

His halfway total of 67, five under par, was enough to give him a two shot lead over Rafferty and Co Louth’s Ciaran Treacy who both came a cropper at the par-3 17th which they double bogeyed after starting the hole on five under.

Rafferty, who started off the first, opened with two birdies and had two more back to back birdies at the two par-5s on the front nine to turn in four under which became five under after a birdie on the par five 10th. He dropped a shot at 15 but got it back at 16 before his double bogey at 17 left him on 69.

After lunch, McDonnell began well with a birdie on his opening hole, the 10th, to go to six under and two holes later he moved to seven under with another birdie. But three successive bogeys from the 15th meant he turned in 37 and, at four under, and was no longer leading.

Rafferty had gone on a charge and after picking up two shots over the front nine, an eagle on the 10th despite finding the rough off his drive moved him to seven under and he extended that to eight under with a birdie at the short par four 14th after a brilliant approach shot.

Murphy and Moran were also on a charge with Murphy birdieing the 14th to move to six under but he handed it back at the next following a wayward drive.

With six holes to play, McDonnell was in danger of being left adrift but he birdied the long par-4 fourth to get back to five under and then birdied the par-5 sixth and the par-4 eighth to make it to seven under.

The 17th, which had proved so calamitous for Rafferty in the first round, caught him out again and he dropped a shot around the same time as McDonnell was holing his short birdie putt on eight.

With both finishing on seven under it took a playoff to decide the outcome and McDonnell showed nerves of steel as he silenced the large home crowd with a brilliant birdie at the first tie hole.

“I am delighted with that,” said McDonnell afterwards. “In the playoff it was like 60 Dundalk lads against me, but I didn’t mind. I was delighted when I walked down there (after the drives) and I was behind him so I knew I could the pressure on with the wedge shot and I put that in close. I played very comfortably and I thinking getting the call for the Home Internationals lifted my spirits and gave me a confidence boost.”