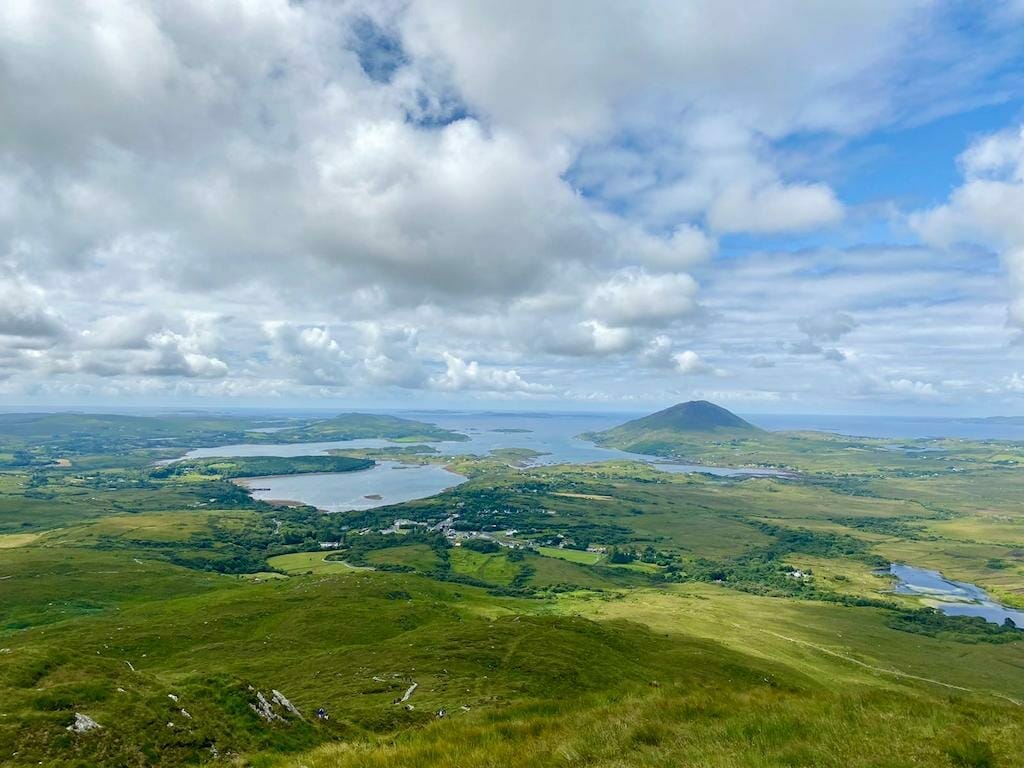 A photo of Connemara taken on a contraption with a screen

It was the great philosopher Ferris Bueller who said, ‘life moves pretty fast, if you don’t stop and look around once in a while, you might miss it’.

So, in that spirit, I downed tools and headed to Connemara, a week off in the depths of the Irish Outback where WiFi couldn’t reach me and the only trolls to be avoided slept under crumbling stone bridges. Even the sticks stayed at home – not by choice of course – but there’s more to life than golf, even when working in golf funds your life.

Under the stars we played music and danced with the sheep, by day we swam with the jellyfish, hiked mountains with the freedom of William Wallace and lay naked as the midges feasted on our flesh. It was staycation bliss.

Home again a lifetime too soon and my phone hysterically beeping with all the things I’d missed. Gymnast Simone Biles vilified for refusing to risk her life for Piers Morgan’s entertainment. PGA Tour mercenary Jason Kokrak selling his soul to become a Golf Saudi ambassador. South African Rory Sabbatini winning a silver medal for Slovakia and Rory McIlroy narrowly missing out on a sing-along with Amhrán na bhFiann.

I wasn’t sure about golf in the Olympics – neither was Rory – but where my reach extends to 197 loyal followers on Twitter, when McIlroy speaks, the world listens, and not for the first time, Rory spoke too soon. What many dismiss though is that he also accepted his humble pie with grace, so enthused by his Olympic experience he’s already plotting Paris 2024 where the leprechauns will rejoice if McIlroy brings home the gold.

In many ways I hope McIlroy’s willingness to speak off the cuff never leaves him – even if, as a fan, I know it’s often to the detriment of his golf. There are few interviewees in sport, never mind golf, as interesting as McIlroy. Don’t believe me? Head on over to asapsports.com and read some transcripts. You’d find more personality in a Covid information leaflet.

And don’t get me wrong – that’s not the fault of the golfer – many have just come to understand that the less they say the better. Why court headlines when you can play dumb ala Dustin Johnson and make your millions unperturbed?

McIlroy’s never worried about creating headlines – regularly ignoring the warning light that must go off in his head as he speaks. Why? Because he’s not about to read them. What sort of psycho living in the public eye could bear to Google their own name? (I do it all the time just so I can stare at the dad I never had and his BBC Newsround that unwittingly inspired this career behind the keyboard, but don’t mind me.)

I’m not sure what 80-year old John Craven would’ve thought of all this but the last 18 months have been draining as a so-called ‘journo’. So far behind the front-line at my makeshift desk, surrounded by pot plants and condiments at the kitchen table, that at times I questioned if the names on the leaderboards I scrolled were playing golf at all. That these global tours weren’t just devising some virtual reality – a sense of much-needed normality – that I was now contributing to by writing reports about these events as if I was there.

You’d forget why you got into the job in the first place typing away unenthused, and then you go to the Mullingar Scratch Cup last weekend, walking the fairways with some of Ireland’s best amateur golfers and remember that getting paid to watch golf isn’t the worst job to be doing – far from it.

Also, and I don’t want to get anyone in trouble given continuous Covid restrictions, but there must’ve been 40,000 people following Jake Whelan, TJ Ford and Paul Conroy during the final round on Monday. (Don’t quote me on that – I wouldn’t be the best man for judging crowds). There was a savage buzz and a very real appreciation for the talent of these amateurs, many of whom – like the winner, Whelan, and runner-up, Ford, work full-time around their golf. I was knackered having just walked 18 holes each day – they played 36, both days!

I can only assume such an endurance test isn’t borne out of tradition, rather to allow for these talents to participate without having to dig into their annual leave – of which I’m now down five days after my pilgrimage to Connemara. Five days where I slept sound, my back carried me without creaking and my screen time ceased to exist. But it’s great to be back in the kitchen all the same. The poor plants needed a drink.