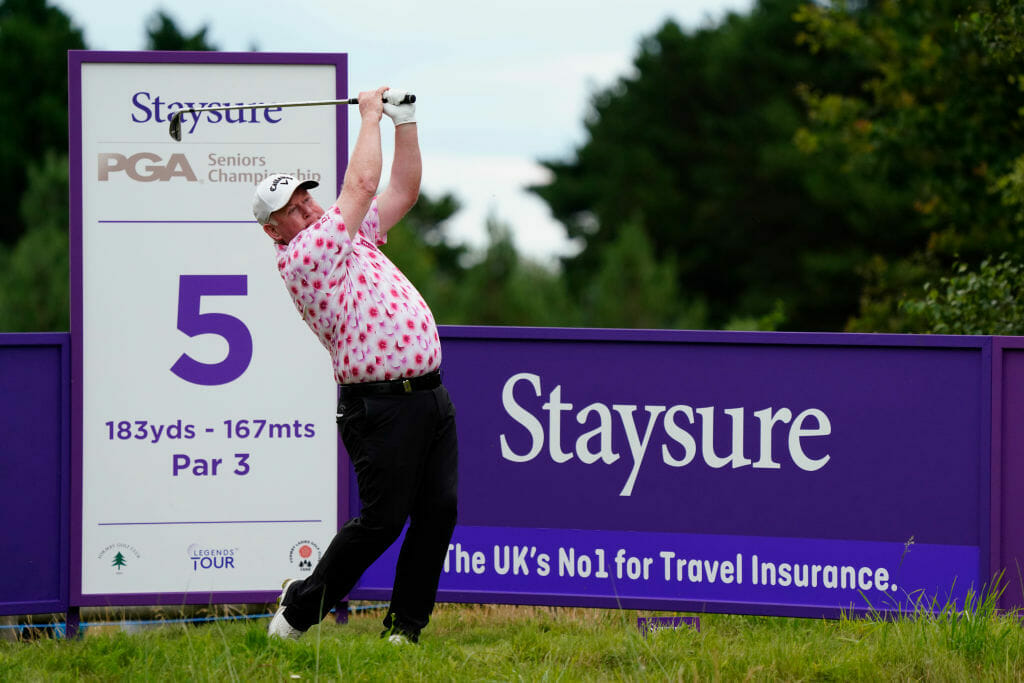 Brendan McGovern in action during the final round of the Staysure PGA Championship at Formby Golf Club on August 01, 2021 in Formby, England. (Photo by Phil Inglis/Getty Images)

Ireland’s Brendan McGovern returned a final round 74 at Formby Golf Club to grab a top-10  place at the Staysure PGA Seniors Championship.

McGovern, who started the day just one shot off the lead finished 1-under par in tied 9th alongside Mauricio Molina, six shots off the winning score of Englishman Paul Broadhurst with Paul McGinley on 3-over par in T17.

Broadhurst, who posted a closing three under par round of 69, reached seven under par and ended one stroke clear of Frenchman Thomas Levet and England’s John Bickerton, who shared second place on six under par.

Today’s victory ends a spell of almost three years without a win for the double Senior Major Champion and the 55-year-old was met by rapturous applause after holing the final putt in front of big crowds at Formby.

“It feels pretty special to win a tournament of this stature on a links course,” he said. “I enjoyed playing the golf course. I remember some of the holes from ’85 in the British Amateur when I played here last, my son played here a few years ago in the English Amateur and he said ‘it’s a tough track, Dad, you’ve got hit it straight’ but I drove it well all week really. I didn’t hit many poor drives and I got it done in the end.

“It looked like it was slipping away a little bit, nothing was really happening. I had a few bogeys, made a couple of mistakes that I didn’t feel were that bad a shot, but that’s what happens in links golf. You can be just off and get penalised.”

Broadhurst secured victory without his wife, Lorraine, by his side but she was not far from his thoughts after winning his sixth Legends Tour title.

“I’m just disappointed my wife’s not here. She’s followed me, she hasn’t missed a tournament in the States in five years, so she’s seen some of the victories and she keeps saying ‘I hope you’re going to win’ but you don’t know. You never know if you’re going to win again so I’m disappointed she’s not here but I’m sure when I get to the car and check my phone there will be a few messages.

“My daughter gets married next Saturday so we’ll have a double celebration.”

The next stop on the Legends Tour International Schedule is the Irish Legends presented by The McGinley Foundation, which takes place at Rosapenna Hotel and Golf Resort from August 20-22.