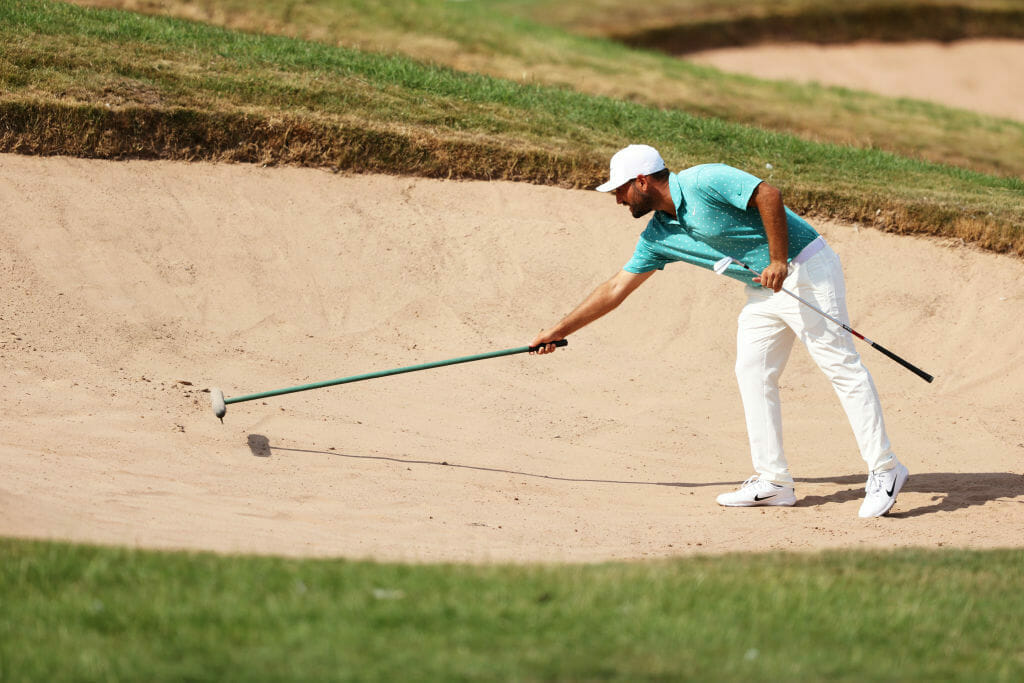 Alexander Levy of France rakes the bunker on hole 6 during Day One of the Cazoo Open supported by Gareth Bale at Celtic Manor Resort on July 22, 2021 in Newport, Wales. (Photo by Warren Little/Getty Images)

Golf Ireland confirmed last week that the standard rules of golf concerning the protocols around flagsticks and bunker rakes are now back in play. I’m not deliriously happy about it and I’m sure others won’t be either.

First, the flagsticks – no problems there. It will be good to have the choice of taking the flag out or leaving it in before putting except we are told that only one player should handle the flagstick on each hole. Should any Golf Club wish to continue with the COVID-related modifications, that is permissible too.

Bunker rakes may also be reintroduced and where this applies, the local rule permitting placing within a bunker should no longer be operated. But, and it is a big one, should a Golf Club wish to continue with bunker rakes removed, they may do so and may also continue to apply it for handicapping purposes.

Only one player should handle the rake where more than one player’s ball must be played from the same bunker. Golfers are strongly advised to bring their own hand sanitiser and to use it after each hole if they have handed either the flagstick or a rake.

While it is rarely good if rules are allowed to be flexible and there isn’t a consistent approach across the board, one can take opposite points of view on these matters. Some will say that bunkers will once again be proper, unpredictable hazards with random consequences of varying severities. The other point of view is that the disappearance of rakes had speeded up the game with less time seeking one and then doing the function of raking. Instead of using one’s feet or club to smooth out the mess, which is every bit as effective as using a rake when done properly and with due care.

I wish golf without rakes would have been be adopted across the board and players were continued to be allowed to place withing six inches in bunkers. Caring for bunkers is a time-wasting and expensive business and going into bunkers is akin to Russian Roulette. Not so for the pros though! Apart from plugged balls they rarely encounter bad lies in bunkers. If you’re a touring pro, every shot from a bunker is followed by a raking routine that must be carried out to absolute perfection by a volunteer (usually a professional greens keeper) otherwise there will be ‘hell to pay!’ The ‘poor amateur’ isn’t so lucky!

In golf’s earliest days, bunkers were always unkempt and uncared for. Even the professional golfer class struggled. Somebody, I know not who where or when, had the brilliant idea to provide rakes. The rake was looked upon as a legitimate golf tool as revolutionary as discovering the ‘wound-elastic’ ball or the steel shaft. An exaggeration, perhaps, but I can imagine why they would have said it if you look at photographs of the state of bunkers in the 1800s and early 1900s.

These days, we are all a little spoiled and demand that our courses be prepared to exemplary standards – including the bunkers. On the pro tours the bunkers could hardly be seen as hazards at all – they are so perfectly prepared and tended to. Not only that but they are as good as ‘all the same’ regardless of what country or continent in which they are located. Is it any wonder pros are so good playing out of them? For amateurs, though, no two bunkers seem to be the same even when they are beside the same green on the same golf course.

I’ll put it to you this way: when two opponents hit their balls into the same area of rough but get different results, it is seen as ‘rub of the green’. When they both hit into the same bunker and one receives a horrible lie and the other a perfect one – there may groans and screams of ‘blue, bloody murder’ but the ball has to be played as it lies. Far better to allow amateurs to place in bunkers. It will improve their bunker play, enjoyment of the game and, speed up play. It’s not the way our rulers and betters see it – more’s the pity.