Costello, Burke, Coulter & Foster fight it out in semis of AIG Women’s Close 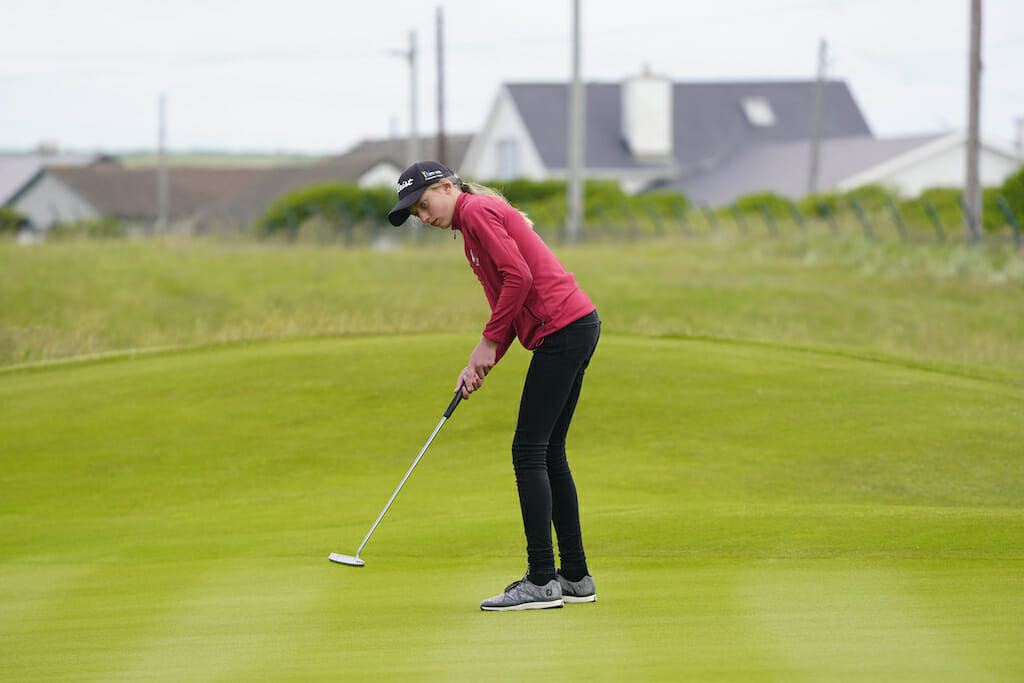 Teenagers Olivia Costello and Beth Coulter will compete in the Semi-Finals of the AIG Irish Women’s Amateur Close Championship in Ballybunion. The duo will be joined by Shannon Burke and Anna Foster after all four came through two matches on Saturday, to be the last players standing ahead of Sunday’s finale.

13-year-old Costello defeated Mairead Martin in the morning, before a 2&1 win over 2004 champion Deirdre Smith to book her place in that last four.

“My aim for the week was to qualify for the Matchplay, but the past two days have been really exciting. I’m just going out and enjoying myself without the pressure”, the Roscommon golfer said after her win over Smith.

“I played solid golf today. I’m playing the course, as if it’s a stroke play event. I can’t be worried about what my opponent is doing, and I just keep focusing on my own game.”

Top seed Beth Coulter safely came through Saturday’s action with a 4&3 win over Emma Fleming and 2&1 victory against Valerie Clancy: “There were two of the toughest matches I’ve ever played,” a relieved Coulter admitted. “My match was tighter with Emma than it looked, and the quality of my match with Valerie was brilliant.

“All of the pressure was on me in the early matches, but I’ve started to relax. It’s all about playing the person in front of you.”

Ballinrobe’s Shannon Burke advanced with wins over Caitlin Shippam and Sara Byrne on Saturday, to reach the Semi-Finals.

“I struggled in qualifying on Thursday, so delighted to get to Sunday, Burke revealed after her Quarter-Final win. My game has been up and down in recent weeks. My focus isn’t on golf fully anymore, and I’m just going out and enjoying it. It brings an added freedom.”

“I’ve come in under the radar, I feel. I’ve had some tough matches. The wind was similar to Thursday, but blew in the opposite direction. It felt like a totally different course today. It’s all about staying patient tomorrow and focusing on one shot at a time.”

In the Ita Wallace Plate, 2018 champion Leah Temple Lang won the title for a second time, defeating Molly O’Hara on the 20th hole.

“I’m honoured to win it. I didn’t have a great day in qualifying, but the Plate gave me an opportunity to refocus”, Temple Lang said moments after her win. It’s a great thing to have my name now on a Perpetual trophy for a second time. It feels like adding my little mark on history.”

Sunday’s Semi-Finals teed off at 8am, with the Final set to start in the early afternoon.