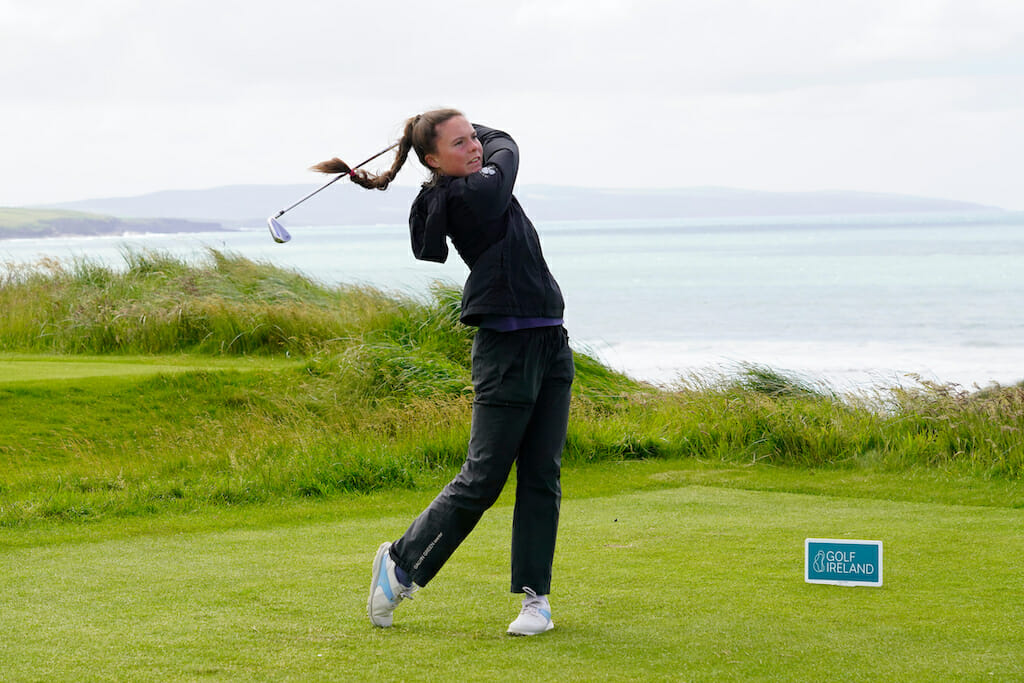 Beth Coulter was the leading qualifier at the AIG Irish Women’s Amateur Close Championship at a blustery Ballybunion on Thursday afternoon. Coulter led after Thursday’s opening round by three shots. Five birdies helped the Kirkistown Castle golfer to a level par round of 73.

It was a packed leaderboard after the opening round, with Castlewarden’s Clodagh Walsh, Ballybunion’s Emma O’Driscoll and Douglas’ Sara Byrne three shots behind the Down teenager.

Despite a +6 round of 79 on a testing Thursday evening, Coulter remained at the top of the leaderboard ahead of playing partners Aine Donegan (+7) and Sara Byrne (+8). Ballybunion’s Emma O’Driscoll also finished with Byrne on +8. Speaking after her 36-holes, Coulter was delighted to get through a tricky second round:

“I’ve never played anything as tough as today. Qualifying for the Matchplay was the main thing, but to get the top spot is nice. I’ve had a really good run of tournaments, and all have been on links. I’m playing well, and holing a few putts.”

Lahinch’s Aine Donegan finished the day in second place, and felt at home on the Kerry links.

“It’s tough out there. The wind was really strong. I was disappointed this morning, but was still top-10 after the round. It’s all about keeping the ball on the fairway, and in play. There are birdie chances out there, especially on the par-5s.

“I played better in the evening, when the wind picked up. It’s a similar course to Lahinch, so I know the course, and it suits my game.”

Douglas golfer Sara Byrne is studying at the University of Miami, but was happy to be back on the links on home soil.

“Today was all about keeping the head, and not posting high scores. It played really tough and was a rough slog. We all had high numbers today, but thankfully myself, Beth and Aine minimised the damage.

Ballybunion’s Emma O’Driscoll posted rounds of 76 and 78 for +8, and was delighted to be so high up the leaderboard, on her home course.

“I’m a bit shocked to be honest. I haven’t been playing much. The course is in great condition, but played really tough. It’s tough for everyone out there. I know where not to hit it in the coming days. That doesn’t mean I wont hit it there. I have a bit of an advantage knowing the course so well, but at the same time, golf is a funny game. I played well today, but that doesn’t mean I will tomorrow.”

Tomorrow will see the Round of 32 in the AIG Irish Women’s Amateur Close Championship, while there will be the Round of 16 and Quarter-Finals in the Ita Wallace Plate.