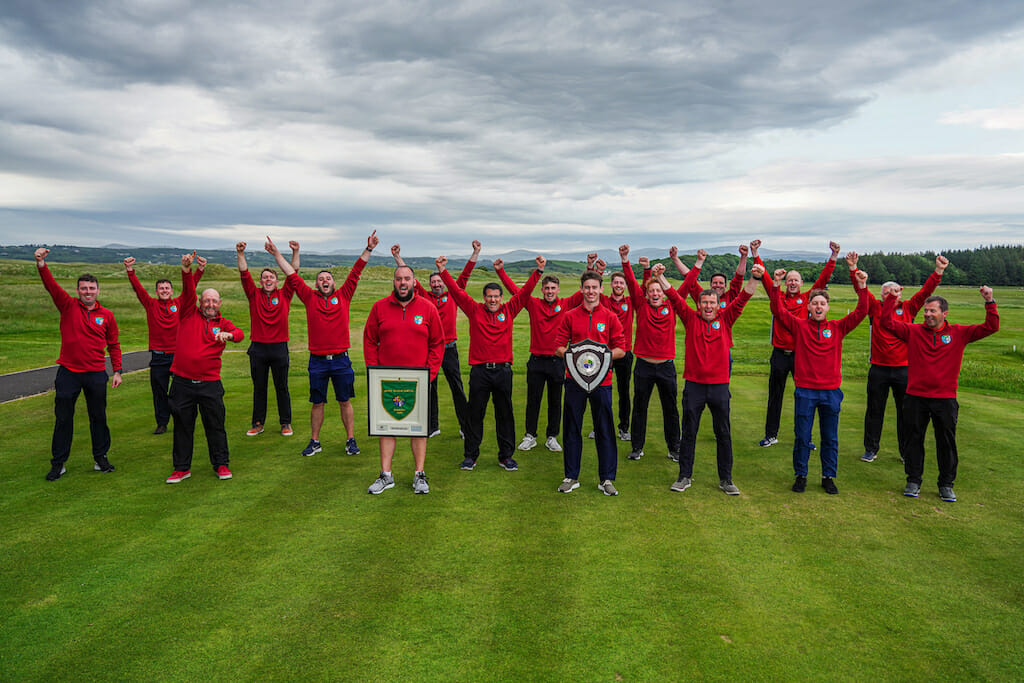 Berehaven are the 2020 AIG Jimmy Bruen Shield champions, earning a first national title for the Cork club. A 3.5-1.5 win over Baltinglass saw the joyous scenes on the 16th green as Declan Dunne and Luke O’Sullivan earned a 4&2 win over Fergal Doogue and Nathan Gerraghty to win the crucial point.

“You cannot imagine how good it feels. It’s the best moment of my life,” Dunne said moments after the win.

“There’s a pile of kids playing, and hopefully more kids and adults will follow,” O’Sullivan added, when speaking about the club. “Most people don’t even know where we’re from. So many people said how far away we are. It’s unbelievable.”

2019 AIG Senior Cup champions Galway were eliminated by Belvoir Park, with the Belfast club comfortably winning their Semi-Final 3.5-1.5. Carton House awaits in the Final, as they look to win the title for the first time. The Kildare club overcame Faithlegg 4-1

“We had our Ulster Finals here in Donegal, so we have good memories of Murvagh. We brought that momentum into the match. For us to get this far has been great, but we want to win. It’s great for the club and a way to motivate those coming through the ranks.”

In the AIG Junior Cup, Castletroy will meet Kilkenny in Friday’s Final. Kilkenny booked their place in the decider with a comfortable 4-1 win over Balmoral, but Ballinasloe needed extra holes to advance. Jamie Corbett finally defeated Castletroy’s John Kavanagh Jnr on the 21st hole to win their Semi-Final 3-2.

Kilkenny’s Simon Cullen had the biggest win in the Semi-Finals after an 8&6 triumph over Ed Hughes. He feels his team are in good form ahead of Friday’s decider:

“Everyone seems to be playing very well, especially after qualifying for the Finals on Monday. I played very well I thought and was very happy with it. We’re expecting a tough match tomorrow. Ballinasloe came through a tough match, but we’re happy with the additional rest.”

Spanish Point and Dunmurry will meet in the AIG Pierce Purcell Shield Final after their respective wins. Three Hehir brothers were part of the winning Spanish Point team, and Fergal Hehir was delighted to have a 3&2 win with his brother Michael over Gort’s Gerard Connors and David Cahill:

“We’re thrilled with the win. There was very little in it. We won the Shield a couple of years ago, and hope to do it again. Michael taught me all I know about golf. We’re a tight family. Tomorrow will be super!”

The Finals of the AIG Senior Cup, AIG Junior Cup and AIG Pierce Purcell Shield will conclude three days of club golf on the Murvagh Peninsula.