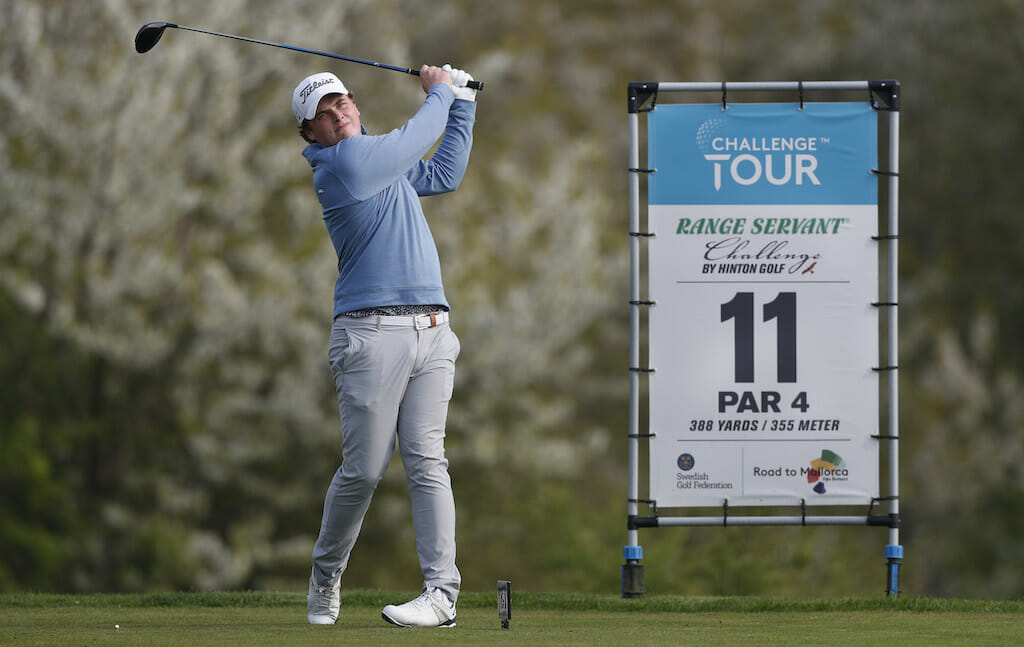 James Sugrue believes he has seen enough to go low on Friday despite carding a more than respectable two-under par round of 70 on his pro debut at the Challenge Tour’s Range Servant Challenge in Sweden.

The Mallow man, who’s been waiting patiently for his first start since turning to the paid ranks in January, finished with two birdies on a weather-disrupted opening day at Hinton Golf Club.

“It was good but I struggled a bit to be quite honest, it was a bit of a battle,” said Sugrue, currently outside the projected cut-mark of three-under par, albeit just five back of the leaders.

“70 at the end of the day is respectable enough for the way I thought I played. Finishing birdie-birdie obviously helped things but yeah, the storm kind of threw me a little bit.

“I was going along nicely, I was on the par-5 in two and then we got called in so I proceeded to three-putt the next two holes. One from close range as well so I just couldn’t really get the pace of the greens from there home.”

The 24-year old was left to ride out heavy rain and thunder in his car and came out after the delay with three bogeys to make the turn at one-over.

“You couldn’t really do much, it was absolutely lashing and thunder so we were advised to either sit in the car or the clubhouse. I just sat in the car and waited it out – it was longer than I expected,” he said.

Having started on the back-nine, however, Sugrue gave himself plenty of chances on the way home, taking four of them with one bogey in between. Far from discouraged having admitted to struggling over the opening day in Malmo, Sugrue will head into day two knowing there are birdie chances aplenty, while he’ll look to cut out the mistakes having posted four bogeys on day one.

“Just that every hole is a birdie hole,” Sugrue said of what he’ll take into day two. “I made a couple of silly mistakes. On my sixth hole I had a wedge in and made a stupid mistake –  was getting greedy and just seeing birdie and ended up making bogey. I’m happy enough but it could’ve been a lot better.”

Also in the clubhouse after a solid opening effort was Gavin Moynihan at even par. The Irish trio of Conor Purcell, Robin Dawson and Paul McBride were out early [Friday] to complete their delayed opening rounds with Purcell the best of them, the Portmarnock man in blistering form after firing a six-under 66 having not competed on the Challenge Tour since last September. McBride matched Sugrue’s scoring with a two-under 70 while Dawson posted a two-over 74. All three players will have a quick turnaround ahead of round two this morning [Friday].