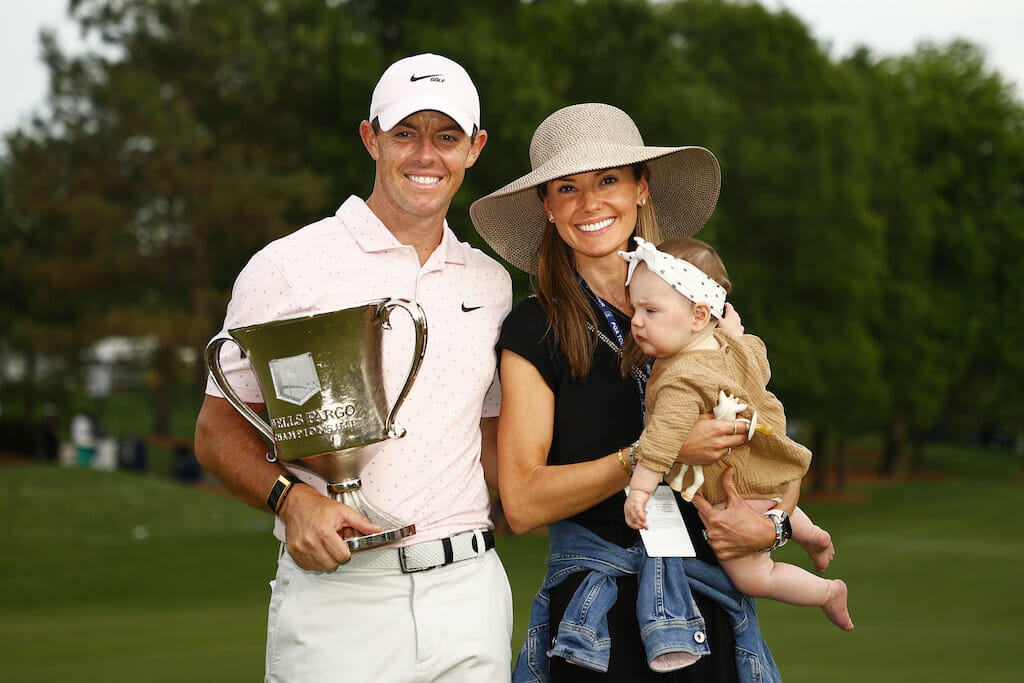 Rory McIlroy celebrates with wife Erica and daughter Poppy after winning during the final round of the 2021 Wells Fargo Championship (Photo by Jared C. Tilton/Getty Images)

Rory McIlroy revealed he had been close to withdrawing with a pre-Wells Fargo neck injury before finally ending an 18-month winless drought, though only after superbly avoiding disaster on the final hole of the Wells Fargo Championship in North Carolina.

McIlroy, no thanks to an errant driver that landed within a lateral water hazard off the tee on 18 and forced him into taking a penalty drop, closed with a final round 68 to win by a shot with a 10-under par tally at Quail Hollow. Texas-based Mexican Abraham Ancer (66) finished in second place at nine-under par.

McIlroy’s last taste of success had been 553-days ago on November 3, 2019 in suburban Shanghai with his Wells Fargo win also snapping the second-longest winless run in his 13-year pro career. His Quail Hollow success is historic as it’s the first time in a 28-event winning career McIlroy’s won an event for a third time, breaking a run of two wins apiece in eight different events.

Waiting for McIlroy at the back of the 18th was his wife, Erica and daughter, Poppy with the occasion also being McIlroy’s first win since she was born late last August with Rory clearly delighted to plant not one but two kisses on Poppy’s cheek.

And the win could not be more-timely with McIlroy’s next event the May 20th commencing PGA Championship at Kiawah Island, the venue 11-years ago for his emphatic eight-shot success in capturing the first of two Rodman Wanamaker trophies.

“It felt like a long time since I had that victory in China back in 2019 and the world now is a completely different place than it used to be with everyone trying to get through a pandemic,” he said. “Life has also changed for me being a dad.  Winning also on Mother’s Day, so I am thinking of my mum back home.

“Ah, it just feels awesome and this is one of my favourite places in the world and to break the drought by winning here again is incredible.”

Though in his championship victory press conference, the recently-turned 32-year old disclosed his neck had locked-up on Wednesday while on the practice range but thanks to intense treatment he was able to take his place in the event.

“I don’t know what caused it but the complete left side of my neck locked-up but then it’s no coincidence I turned 32 the day before,” he said smiling.

“I literally, I hit a shot — I had done a really good practice session on the range. I hit a 3-iron, flushed it and I turned back to talk to Harry and as I turned, my left side of my neck just completely locked up and I couldn’t move it. It was really, really strange.

“So I stopped what I was doing and I went and got some treatment. I iced it all of Wednesday afternoon, Wednesday night. I woke up Thursday, didn’t have much movement. Was trying to make a backswing and could only maybe take it half the way back before it started to catch.

“As I said, if I had been playing Thursday morning, I probably would have pulled out, but I had enough time to get treatment Thursday morning, get it loosened up. It was still bothering me on Thursday afternoon. People probably saw the tape that was on my neck, but it sort of loosened up as the week went on. Again, just all these tiny little things that you need to go right to win golf tournaments and thankfully I had an afternoon tee time on Thursday that allowed me to at least tee it up.”

Feeling much better, McIlroy headed into the last day trailing two shots behind Keith Mitchell who led the field on nine-under par. The pair were in the final group with Mitchell, the shock winner of the 2019 Honda Classic, seizing the initiative to go three shots clear when he birdied the first.

McIlroy struck back in holing a six-footer for birdie at the third and then when Mitchell bogeyed both five and six, and McIlroy birdied the par-5 seventh from 23-feet, the Northern Irishman was in front on nine-under.

He then parred the next four holes before being the first to get to double figures and into the lead at 10-under in finding a greenside bunker at the par-4 13th with his drive and then getting up-and-down for a birdie ‘3’. And a noisy but Covid-19 reduced crowd made the most noise all week when McIlroy made back-to-back birdies at 14 in also finding a greenside bunker but walking off with a birdie ‘4’. He made pars on 16 and 17 before his only bogey on 18 after taking his unplayable, firing his third to the heart of the 72nd green and rolling in the necessary two-putts.

McIlroy now has a week off before the year’s second major at Kiawah Island but clearly has much work to do under the eye of coach Pete Cowen having hit just four of 14 fairways and posting a respectable 28 putts.

Seamus Power posted a final day 70 that included four birdies and one less bogey for a four-over par total to finish just outside the top-50. The West Waterford golfer booked his place in the Charlotte field in finishing first last Monday’s qualifier though there’s no such concern this week with Power exempt into Thursday’s starting AT&T Bryon Nelson in McKinley, Texas.

And Shane Lowry joins McIlroy in having the week off ahead of the PGA Championship after his disappointing final few holes in a closing round of a level par 71 to stay at six-over. Lowry had been two-under for his round but proceeded to bogey 15 and 16.

And Bryson DeChambeau headed home to Dallas comfortable after finishing just outside the top-10 after Friday’s private jet embarrassment. The reigning US Open had been out early on day two and after finishing at two-under par, then well outside the projected cut-off mark, DeChambeau jumped aboard his private jet only to learn shortly before landing in Texas he had made the cut.

The World No. 5 returned to Charlotte early on day three and was naturally delighted to add a weekend pair of 68s for a four-under total.

“I’m glad I came back”, said DeChambeau smiling. “It was no doubt worth it. That’s what I was hoping to do this weekend when I was on that plane at 2:45a.m Saturday morning. Yeah, I wanted to make it worth it as I didn’t want to come out here and finish 60‑whatever, close to last.”