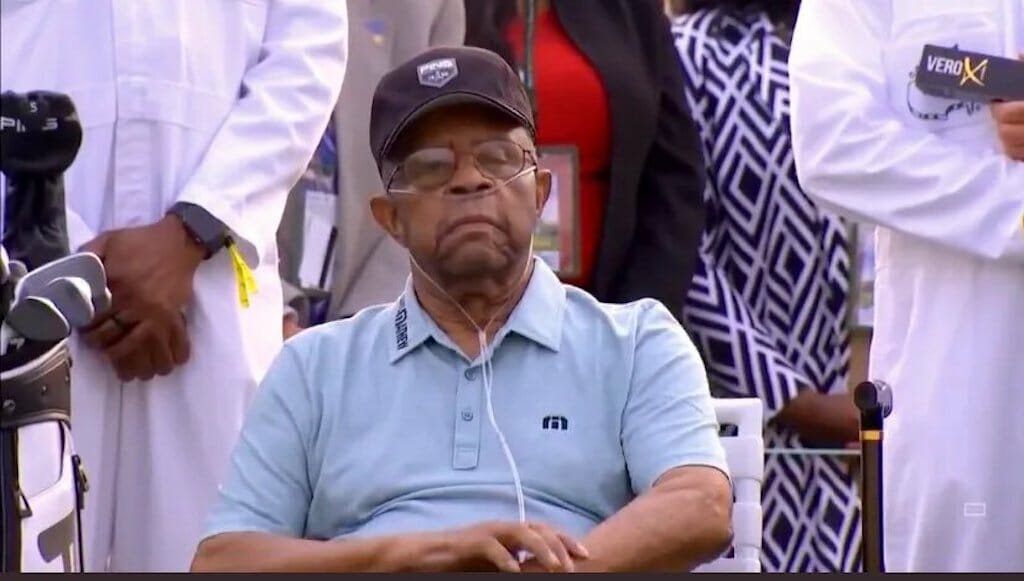 Player had joined Lee Elder, Jack Nicklaus and his father on the first tee ahead of the official start to play in the 85th Masters. Elder was introduced by Augusta Chairman, Fred Ridley but with an injury preventing him from joining Player and Nicklaus teeing-off in the now annual ceremonial opening tee shots.

What Gary Player had to do with the publicity stunt is uncertain given he has been an ambassador for ‘OnCore’ golf balls since 2019 but how he did not speak to his son continues to amaze many.

And it did not take long for eagle-eye viewers of the early morning TV coverage to get onto social media and slam Wayne Player’s action.

One of those was Marc Player, the estranged son, who described the incident as “embarrassing and illegal ambush marketing” and “tone-deaf”.

And expressing a complete lack of awareness and also being ‘tone-deaf’, Gary Player said after the ceremony that Elder has “experienced a lot of things that I experienced in my life”. Unless Player meant that he and Elder are both golfers who have played a lot of golf, it’s impossible to see what “experiences” Player and Elder have in common.

It was not the first time Wayne Player has been in trouble during Masters week as back in 2018, a civil suit and an arrest warrant was issued when he skipped paying for fees for a rented house. A representative from OnCore indicated it ‘did not instruct’ Player to “have our ball sleeve visible” during the ceremony.

Matsuyama Masters Augusta + Is the Irish Open in doubt?