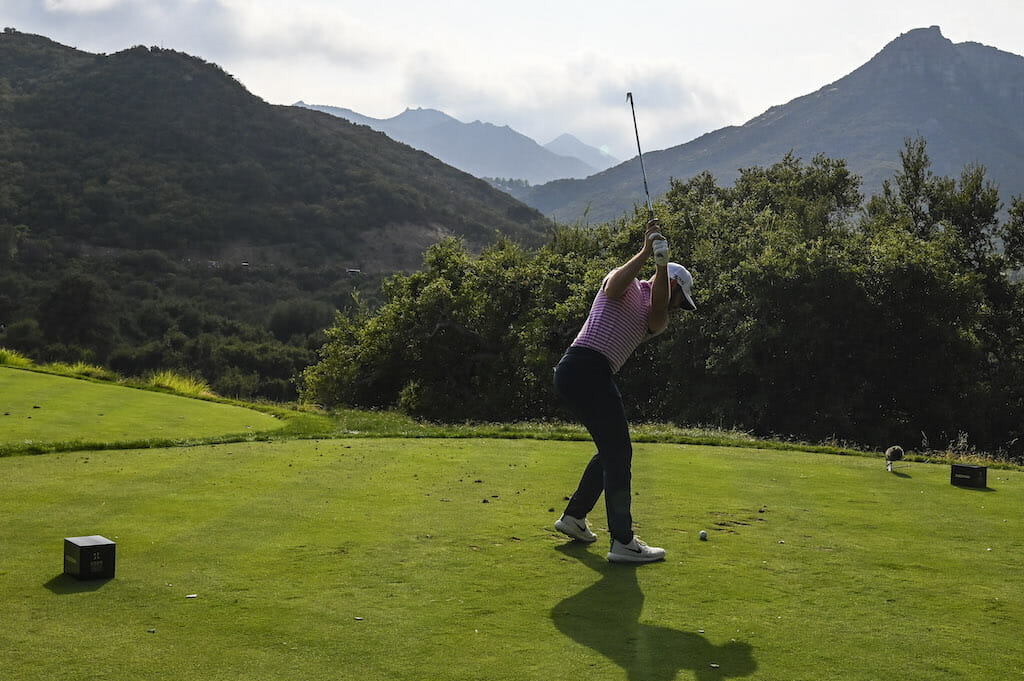 There has been plenty of hogwash talk on TV lately accompanied by grainy film replays illustrating Matthew Wolff’s ‘loopy golf swing’ and how similar it is to the swing of former Irish great, Jimmy Bruen. Pay no heed. It’s a load of bunkum. The only similarity between them is that they possessed loops of various shapes and degrees when transitioning from their backswings into their downswing.

The concentration should have been on their impact positions. Nobody ever hit a good golf shot with their backswing. It’s the downswing and more specifically impact and the ten inches or so before and after it that matters most.

Matthew Wolff, whose loop is unmissably gigantic, has fuelled this latest interest in Jimmy Bruen (born in Belfast in 1920, died in 1972 but who moved to Cork as a child and is really a product of the southern capital in golfing terms at least).

Wolff pushes the club back with his left hand along a huge, high arc, well outside the ball’s eventual flight path – until the club head reaches a position directly over his head and with the shaft pointing directly at 12 o’clock before he whips it back inside the line to the target to generate his exceptional speed and power. His body really has no choice but to do it before he releases the club into an almost classical finishing position by driving the club head forward with the legs. It’s beautiful to watch and, may I say, if any golfers reading this are plagued with ‘coming over the top’, they should copy Matt Wolff and their troubles will be over.

At casual glance, Bruen’s swing appears similar to Wolff’s even though his backswing took a completely different route. Jimmy brought the club back fairly low to the ground initially and well inside the target line, which is the opposite to Wolff’s takeaway. He, therefore, was forced to make a completely different adjustment in the transition to Wolff in order to ‘flatten out’ his downswing and get it back on-line or, to be accurate, just inside it.

Because all golfers swing at the ball side-on, their swing paths are arced from inside to out to inside again. It’s all a matter of degrees. At the top of Bruen’s swing his hands were also directly above his head but the club head and shaft pointed at 2 o’clock. This position helped him to generate an extraordinarily powerful wrist snap at impact (no wonder he damaged his right wrist so badly during practice for the 1951 Walker Cup at Royal Birkdale that his appearances in championships thereafter were few and far between).

Bruen was arguably the best amateur golfer in the world in 1946 having won the Amateur Championship and his performances in the Walker Cup. Sadly, he had ‘lost’ his prime years to WW2 and his list of victories does not match Joe Carr or Garth McGimpsey, but who is to say he would not have been at least their equal but for the War and injury? The great professional, Henry Cotton said he wouldn’t dare to play Bruen for a bet.

I was fortunate to observe Bruen in his last public appearance as a championship golfer during the 1963 Close Championship at Killarney when, though past his best, he reached the semi-final round before succumbing to Joe Carr (the winner) by one hole.

My personal mentor, Fr. Gerry Enright and I also saw him quietly (on his own) hitting balls at Ballybunion one day on the (old) 18th fairway but when we stopped to watch, he stopped too and set about picking up his golf balls. I don’t think I’d have been capable of asking an intelligent question at that stage, but Fr. Enright might, if given the chance?

Needless to say, there was nothing odd about the way these three golfers negotiated their way around 18-holes, producing wonderful scores in the process. If they each did it their own way – a way they weren’t taught – but had figured out for themselves, so what? The common denominator being they had a highly developed sense of rhythm, feel and target projection. Golf is where the ball goes and there is a lot more to it than the swing whether it contains a loop or not.