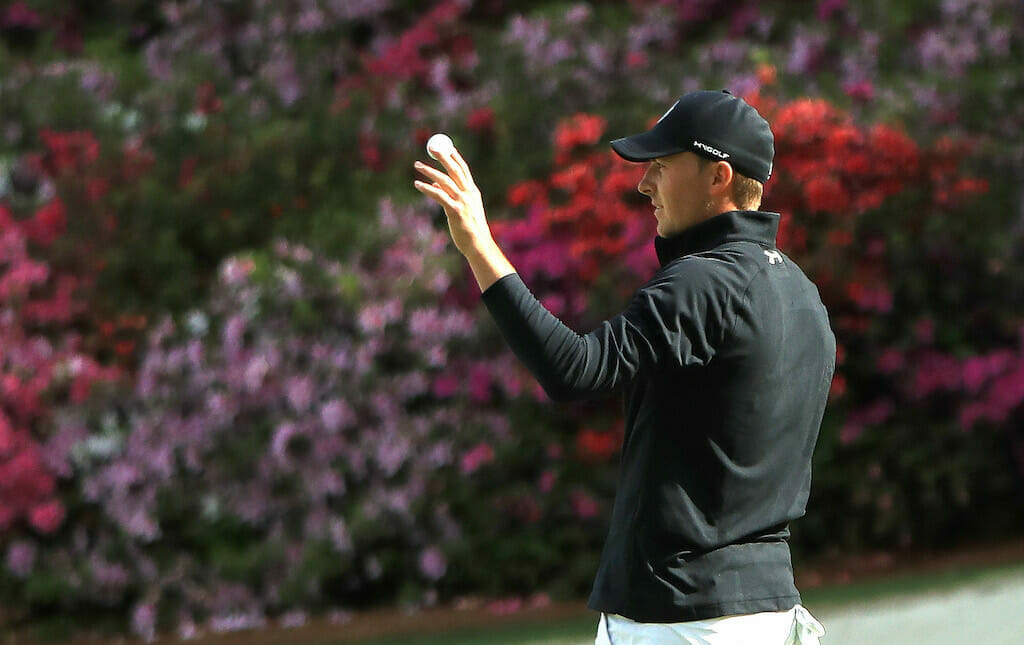 Jordan Spieth says he is definitely in a better place one week shy of returning to Augusta National for the 85th hosting of the Masters. Spieth, 27, has been like a forgotten winning hero on the PGA Tour until recent weeks.

The affable Texan has won 14 times around the globe, including 11 on the PGA Tour, with three of those major championships including the 2017 Open Championship at Royal Birkdale. However, his dramatic victory that Sunday afternoon in July, including his shot from the practice range well right of the 13th fairway, is Spieth’s last taste of victory. The win lifted him back to No. 2 in the world, and this after having been ranked No. 1 in finishing runner-up to Aussie Jason Day at the 2015 PGA Championship.

But since winning at Royal Birkdale, it’s been a slow slide down the World Rankings for Spieth to ending 2020 ranked No. 82nd in the world. Included in that ranking period was last November’s Masters where he finished T46th having been fitted with an Augusta National members jacket in 2015.

Spieth had not been anywhere near 82nd in the world since mid-2013 when he leaped from 120th to 59th in claiming a maiden Tour win at the John Deere Classic. It has only been in recent months the Jordan Spieth we so much admire began to reignite that winning form with five top-10s in succession from the Farmers Insurance to the Arnold Palmer Invitational while his past two events were an 11th at the Players Championship and making the last-16 of last week’s WGC – Dell Match-Play Championship in his beloved home state of Texas.

And Spieth has remained in Texas for this week’s Valero Texas Open being held again on the Greg Norman designed TPC San Antonio course in ‘The Alamo’ city.

“It’s very convenient, we were only about an hour, hour 20 away from Austin,” he said. “I spent kind of the weekend hanging in Austin and then came down I guess Sunday evening and tested. So, excited for this week. Obviously leading into next week, so trying to just keep progressing, keep working on what I’m working on and try to get myself in contention and have a chance to win on the weekend.”

And while it’s nearing four years since his last victory, Spieth’s welcome return to the pointed end of tournaments has him happy about his game and the remainder of the season.

“I think definitely in a better place, feel good tee to green,” he said. “I am trying to continue to progress and get even better and tighter, especially with wedge distance control.

“It kind of started to feel a little bit better throughout the Match Play, but just got some work to do on my stroke and then just dial in some short game shots that I may just have taken my mind a little off of with a lot of swing work. Fine tuning the short game is going to be No. 1 priority. Any kind of technique work on the swing, try and kind of get that out the next couple days and then spend the next 10 just in game mode, similar to what I’ve done in previous years. But yeah, I feel in a better place than leading into the last couple of Masters.

“You know, you go there, I expect it to be a very different Masters than what we’ve seen in the last couple. Rumours that I’ve heard already are that it’s already firm and fast two, three weeks out from the golf tournament. I think it will play significantly different and I’m looking forward to that challenge.”

And for any player, whether you’re a Masters champion like Spieth or not, there’s nothing to get you more excited as driving into the front gates at Augusta National that he will do again for an official eighth time in his career next Monday.

“It’s normally Monday for me when I get there. Drive down Magnolia Lane, for me it’s like, ‘It’s go time,’” he said. “Almost regardless of form, regardless of if you just won or if you’ve missed the previous cut, it really makes no difference to me in my confidence level when I pull into Magnolia Lane.”