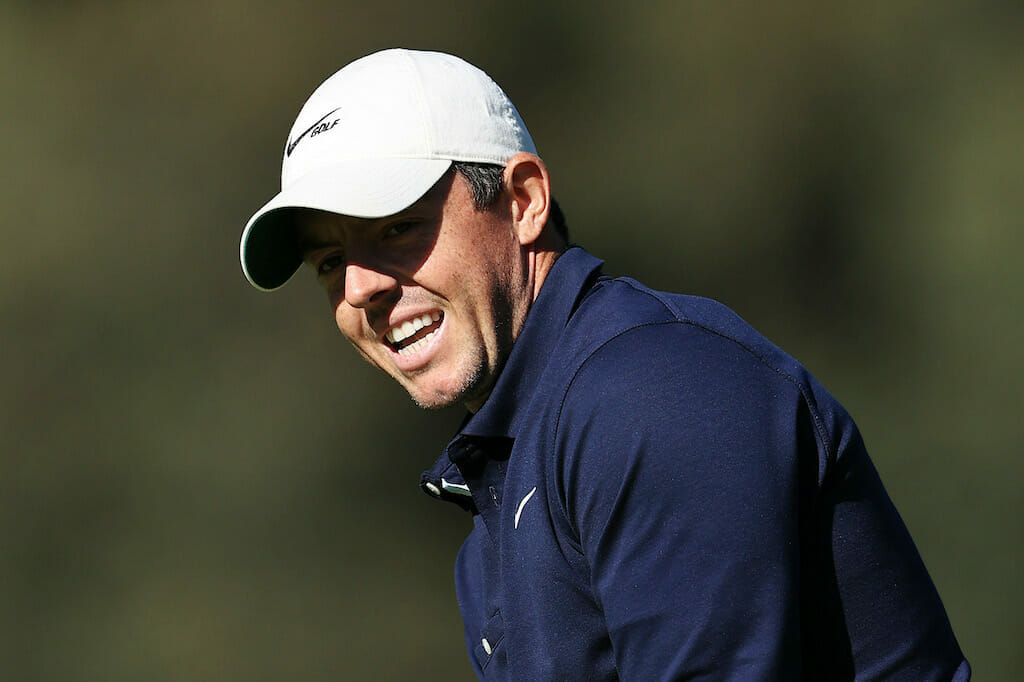 Rory McIlroy was one of a number of players to fall victim to the tenth hole on day one (Photo by Sean M. Haffey/Getty Images)

Riviera’s driveable 10th Hole was once described by no less than Jack Nicklaus as the greatest short par-4 in championship golf. Jack said this because of the variety of intriguing options thrown at the players and their inability to resist temptation and lay up on a hole measuring not much over 300 yards, and with no place to go to make it any longer.

The opportunity to score a morale and score boosting eagle may be too much temptation to resist for today’s big hitters but, one after another in Thursday’s opening round, there were more mess ups than birdies. It’s almost impossible to get the ball onto the green from the tee even though it is well within reach for today’s bombers. The entrance to the putting surface is ‘single file narrow’.

If the green is missed to the right of a long bunker that guards the right side of the putting surface – good luck! Going over to the left plays Russian Roulette with a strand of trees and results in a likely stymie. Even if you are bang in front of the green and more than thirty yards away, the hog-back crowned surface plays tricks on any shot that isn’t spot on for accuracy, trajectory and speed (to control the bounce).

There is one small area short and left that pays dividends – the proof is the average score for those who found this lay-up position yesterday was 3.25. It’s a proper risk-reward hole that forces players into a difficult decision on the tee that will strip them of their mental equilibrium if they don’t get it right. If it happens to be the first shot of the day, even more so.

A stats guru with growing influence on the PGA Tour, Scott Fawcett, the creator of DECADE—a data-driven course management system disagrees. He says he can prove (statistically) that it is a no brainer to go for the green. The lay-up area is too small and the risks are the same (he says). Yesterday’s first round leader, Sam Burns, was one of the many who took Fawcett’s advice to go for it with his first shot of the day and he scored an eagle two.

That’s the conundrum the player’s face – comparing the benefit of laying up to a tiny, optimum lay-up area that is a lot smaller than the green. It’s easy but unwise to second guess players when watching them on TV because they have to go with how they are feeling in the moment. Then, accept the reward or live with the consequences.

My takeaway is that nobody plays lay ups on the PGA Tour. Time was when half the field would lay up at Riviera’s 10th hole but pro golf isn’t played that way anymore – more’s the pity. When I was a young fellow full of aggro and horse power, the biggest mistakes I made were not laying up when I should have! A short par 4 like Riviera’s 10th freaks everybody, long, short or medium. Is that not the way golf should be? Holes do not have to be lengthened to be made more difficult.