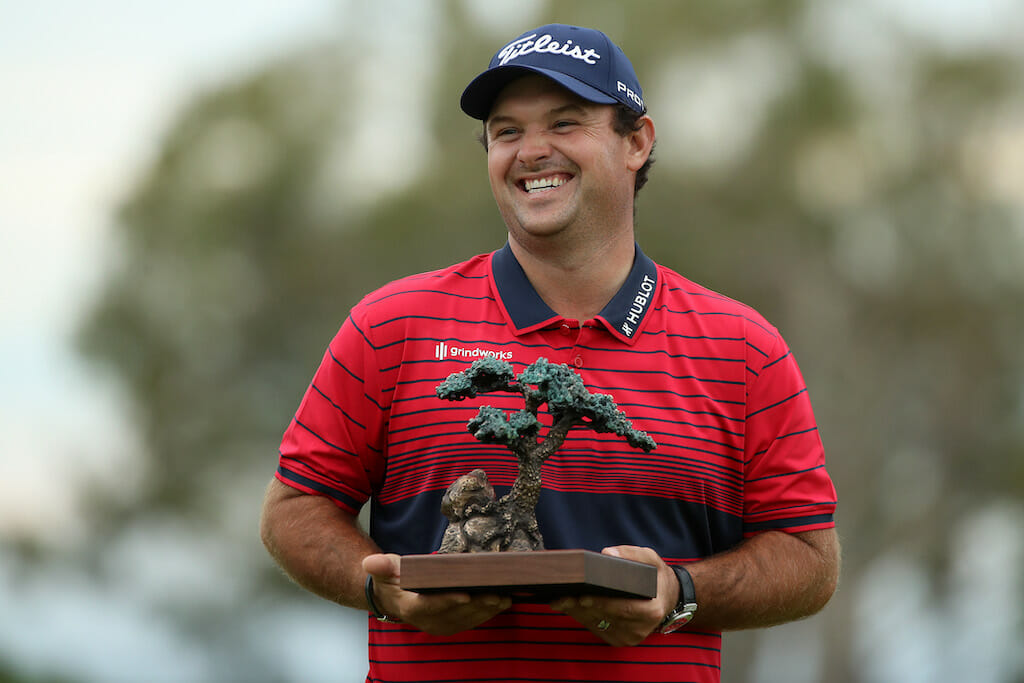 Say what you want about Patrick Reed, and most of us already have, but his ability to rise from the rubble of adversity seemingly unscathed has to be his most impressive attribute.

After all the accusations of cheating, the “embedded” ball fiasco, the all CAP-locks twitter rage and an inquisition post-round on Saturday, Reed, cleared of any wrongdoing by PGA Tour officials, came out on Sunday and gave a golfing masterclass to slay the field by five shots at the Farmers. A final round four-under par 68 for a 14-under tally, Reed once again rolled with the punches and came out the other side smiling as champions should. Reed’s secret?

“I think the basic thing is you have to have resilience,” he said, “especially when you’re out here because golf’s hard as it is and you come to a place like this where it’s so demanding not just off the tees, it doesn’t matter if it’s a drive, an iron shot, a wedge shot, putt, you have to be all locked in 24/7. I think that’s the biggest thing is when you play a U.S. Open type golf course where you play a place that’s as long as this is, you have to have resilience.

“You look at all the great players throughout times, all of them are really resilient. It doesn’t really matter what’s going on around them, what’s going on on the golf course, whether they’re getting good breaks or bad breaks, they seem to really figure out a way to get the job done, to really just drive in and to keep on improving each shot each day. That’s golf, that’s what you’re supposed to do. That’s why I love the game. It throws punches at you, you throw punches at it and at the end of the day hopefully you’re the one standing.”

While Reed’s reputation as a golfer was intact after an exhibition of golf around Torrey Pines on Sunday, a seedy underbelly continued to rear its ugly head after he took embedded ball relief for a ball that couldn’t have been embedded during his moving day round. What should’ve been a great occasion for Reed, one where we all fawned over the short game skills that secured him his title and tenth spot on the World Rankings, saw Captain America left to field questions around his integrity instead of his talent, not that it soured his Sunday celebrations.

“I did everything I was supposed to do yesterday and I was confirmed by the rules officials yesterday after the round,” he said. “When the rules officials call and tell you you did what you’re supposed to do, you did everything correctly, that’s all you can do. At that point it put it to bed for me and I was able to move on and come out today and do what I was supposed to do, and that was play golf and work with my coach, keep on trying to drive in this golf swing and get it a little more comfortable, a little more dialed in and allow us to go out there and plot ourself around this golf course and go shoot as low as possible.”

And for those thinking that Reed would be left to admire his own reflection through his Farmers Insurance Open trophy in the post-round press conference, think again, as this exchange brought an end to proceedings:

PATRICK REED: For sure. I feel like golf is a game where it’s won not just by talent, but hard work and between the ears. Because, like I said, one day you’re out there, you’ll hit 14 fairways, 18 greens and make every putt and then the next day you get out there, you feel like you haven’t swung a golf club before. It’s how are you able to handle it mentally and figure out a way to get it done. Feel like golf is about resilience and hard work and how — because especially at this level. Everyone can swing the golf club, everyone can hit the golf shot. If they’re on, they’re going to hit the ball great. It’s who can handle the days that aren’t so great, whether it’s ball-striking or whatever it is, to be able to mentally handle it to keep yourself in golf tournaments to be able to have a chance to win.

Q. And what does your golf reveal about your character?

Q. Patrick, apologies if you’ve answered this before, but just take me through one more time, why did you feel the need to pick up the ball before the rules official came out there?

PATRICK REED: It’s basic protocol. Whenever you’re taking relief or if you’re checking to see if the ball’s embedded, you put a tee down to lift it up to see if it is. When I got done with the round and the head rules officials up there played the video and said we did exactly what we were supposed to do, obviously I did the right thing.

Q. There are people who feel you cheated. What do you have to say to them?

PATRICK REED: I’ve already said anything I need to say about what happened yesterday. All I can really do is focus on today and just listen to what the rules officials said and they said that I didn’t do anything incorrect.