The Good, The Bad and The Bryson 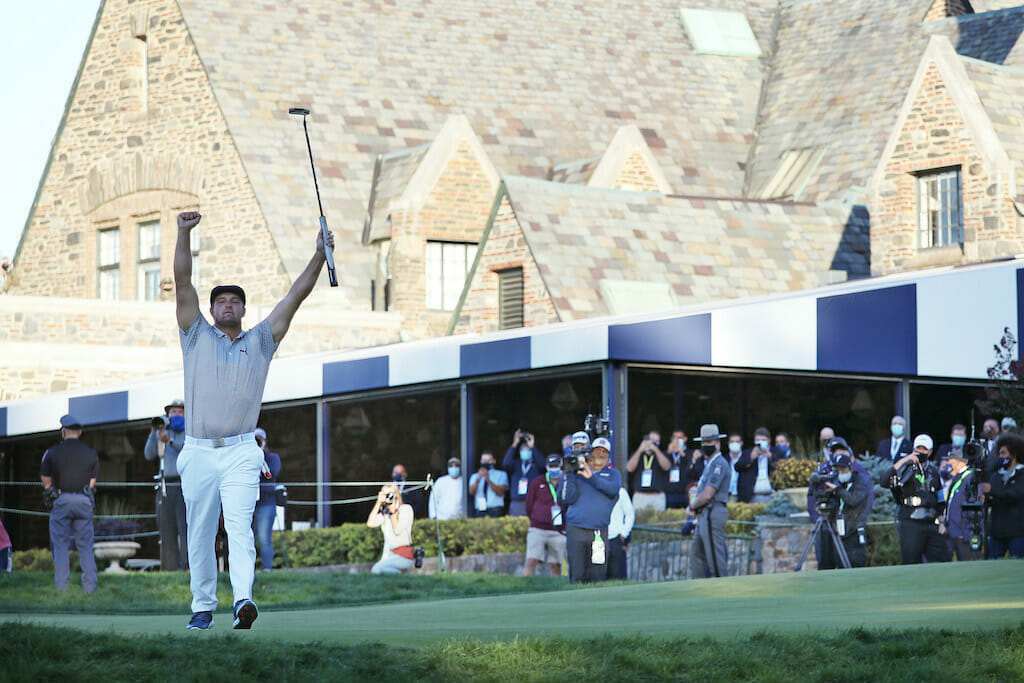 Well, 2020 is over, and unless you’re Jeff Bezos or you’ve got shares in Pfizer, BioNTech, or Zoom, you’ll not be shedding many tears.

But with The Dubs hammering everybody, Boris Johnson cruising into the icy waters of a “no deal Brexit” like he’s Captain of the Titanic, Gary Player posting videos of himself at the gym, and the Irish government giving themselves pay rises in a hail of slave labour and hypocrisy, it’s good to see things getting back to normal again. So, in the spirit of normality, I’d like to take this opportunity to take a look at some of the good and the not-so-good of professional golf in 2020.

Ok, the biggest story – literally and figuratively – has to be Bryson DeChambeau. The PGA Tour’s Bruce Banner – the comic-book physics professor who unwittingly transforms himself into a hulking giant – was box office quality all year long. Part-genius, part-idiot, and all-round unorthodox entertainer, Bryson’s attention-seeking shifted into overdrive as golf became centre of the world sporting stage for once.

From posting videos of shirtless bacon frying – anybody who’s sizzled a rasher before knows that going topless is a major faux pas – to holding press conferences about protein shakes and chocolate milk. Living to 140 years old, fire ants, “garbage” out-of-bounds rulings, Koepka’s steroids tweet, waiting for the green to clear on a 410-yard hole, winning the Rocket Mortgage Classic by three and the US Open by 6, and proclaiming Augusta National a par-67 and then proceeding to shoot two rounds of 73 and over, whether you love him or hate him, you couldn’t look away.

Viewers certainly could look away as Dustin Johnson cruised to victory at the Masters, with CBS recording their lowest ever market share for the final round coverage. Yes, it was an early start, yes, it was competing with the NFL, and yes, everybody knew that there was no way that even DJ was going to throw this one away.

Dustin began the year ranked fifth in the OWGR and hadn’t finished better than T20 since May last year, but the second half of 2020 was incredible. Three wins, about $25 million, a green jacket and the number one ranking is a fair return for somebody who still managed to post consecutive scores of 80, 80 and 79 along the way. And for the first time ever, he showed his human side. I can’t wait to see what 2021 brings for DJ.

You’d be forgiven for thinking that Collin Morikawa, Matthew Wolff and Viktor Hovland were triplets for the way their fledgling professional careers are often grouped together – yes, I’m aware of the irony here – but this calendar year alone has seen Hovland win twice, Morikawa win twice (including a major) and Wolff post a runner-up and a T4 in his first two major appearances. We’ll be seeing those names on leaderboards and in Ryder Cups for a long time to come.

Koepka, to McIlroy, he lays it off to Jon Rahm, plays a one-two with Justin Thomas, now Dustin Johnson…. No, that’s not the commentary from the PGA Tour five-a-side competition – though an ill-tempered final against Bryson, Patrick Reed, Paul Casey, Jason Day and Bubba Watson would be a pay-per-view affair – that’s the way the top spot in the OWGR has changed hands this year. Five different players held down the number one ranking this year – only five had held it during the previous four years – and if that doesn’t whet the appetite for 2021, I’m not sure what will.

Well, Tiger Woods probably won’t. The great man’s epitaph has been written many times over the past decade – never by me, just to clarify – and he proved them all wrong, but this year was one to forget for the 15-time major champion. He never looked comfortable for four straight rounds and with the competition getting younger and the distance they hit it getting longer, it’s hard to see Tiger competing that frequently. And harder still to see him breaking Sam Snead’s record.

On a personal level, I’m sure Rory McIlroy had a great year. I imagine the Holywood star will take to fatherhood like he took to golf – a natural – but call me a curmudgeonly old git, I’m more interested in what he does inside the ropes than outside them. There are enough cases of new fathers excelling in sport to make the “nappy factor” an actual thing – even if I’d question its legitimacy – so the impending parenthood excuse is sketchy at best, and the “no crowds” excuse is even less valid. The truth is, he just hasn’t played well since the restart and he’ll be the first to admit that. 2021 is a huge year for Rory the golfer and the Rory the father. I have more doubts about the former.

The final PGA Tour stop of 2020 was a sad affair for fans of superstition. You see, the thing about superstition is that you don’t have to be superstitious to appreciate it, and the Puerto Rican curse was like a weekly event within an event on tour. For those unfamiliar, prior to Viktor Hovland’s Mayakoba Classic win, no winner of the Puerto Rico Open had ever won a tour event again, apart from Michael Bradley whose only other win came in Puerto Rico again two years later. Tony Finau seemed the most likely curse breaker when he won there in 2016, but four-and-a-half years and about 25 top-10s later, the powerhouse remained powerless to lift the evil spell.

Maybe legend foretold of a Norse warrior who would slay the demonic dragon once and for all. Valhalla awaits – the Norse mythological heaven, that is, not the Kentucky Golf Club where Rory McIlroy’s last major win occurred. But you know what this means? Finau is freed. Time to bet big on Tony for 2021.