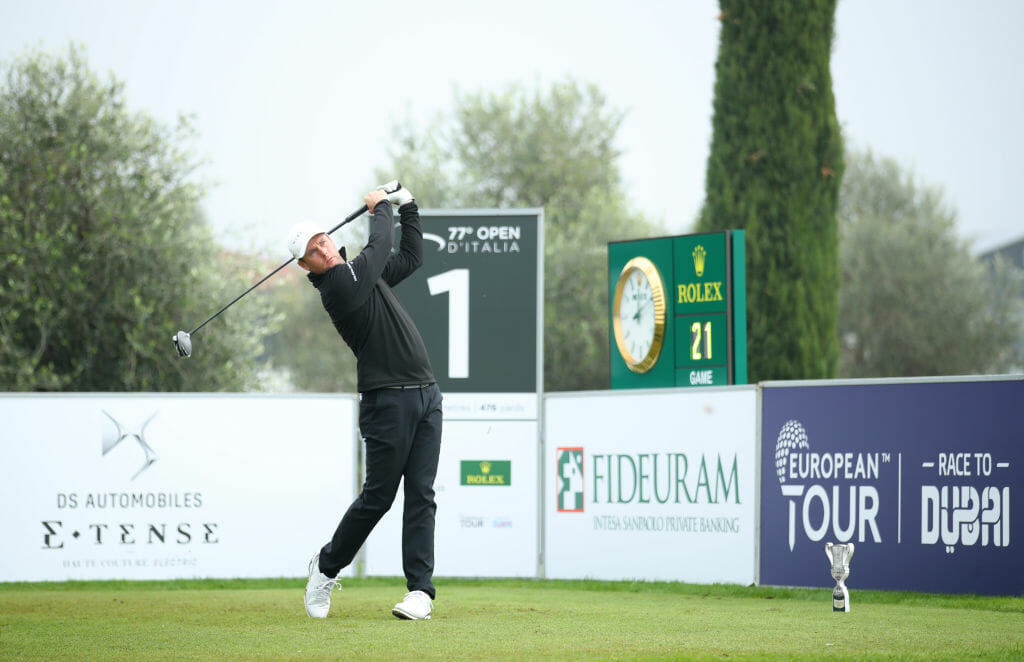 Jonathan Caldwell tees off on the 1st hole during Day Three of the Italian Open at Chervo Golf Club. (Photo by Warren Little/Getty Images)

Jonathan Caldwell has a little work to do in Italy tomorrow but he’s still in line to improve on his career best T7 Tour finish from last week in Scotland.

The Clandeboye golf returned a third round 68 at the Italian Open which included an eagle, four birdies and two bogeys and he finds himself in a five-way tie for 8th place on -13, six shots shy of the leaders Laurie Canter & Ross McGowan.

Ireland’s other representative also fared pretty well with Cormac Sharvin adding a third consecutive round of 69 to sit in T33.

For their part, Canter and McGowan will carry a three-stroke lead into the final round after an enthralling moving day battle between the English playing partners at Chervò Golf Club.

Canter entered the weekend with a two-shot advantage, having opened his account at the Brescia venue with a stunning first round 60, but he could not build any momentum in the opening exchanges on day three.

A trio of successive birdies in the final three holes, however, meant his name remained at the summit as the 30-year-old signed for a three under 69 and a 19 under total to continue his hunt for a wire-to-wire victory and a maiden European Tour title in his 86th appearance.

“I’m pretty happy with that score, because the first few holes I felt pretty out of sorts to be honest. I couldn’t get myself going and I was trying not to fight that too much and stay patient. Then obviously to finish like that is great and to finish in the 60s is a great effort after that day,” said Canter.

“It was a good first swing in the fourth hole and I was quite happy with it, I reckon I would have been on the fairway. I hit the second shot, the power line didn’t hit it for me, I just made a really bad swing and hooked it in the lake. So it’s difficult and I guess it’s just a feature of this course, you’ve got to contend with the odd power line.

“I was unfortunate there but you’re probably going to get your fair share of good and bad luck. I got a great break there on 16, in the bunker it gave me a nice shot so it takes a bit away from you and usually the golfing gods give it back at some point.

“I definitely feel confident I can go out and stick to what I’m doing. I don’t know if that will be good enough. I have a feeling tomorrow a few people a couple of shots back will pull the anchor up and go for it and somebody’s going to go low tomorrow, so Ross and I and those around us will have to keep going forward to be up there. I like how I feel out there so we’ll see how I feel then,” he added.

For McGowan, a win would complete a remarkable return to the kind of form which earned him a maiden European Tour title at the Madrid Masters back in 2009, en route to a 12th place finish in the Race to Dubai.

After a topsy-turvy front nine which included two birdies, an eagle and three bogeys, the 38-year-old steadied the ship and four birdies on the way home – including three in the final four holes – earned him a five under 67 and a share of the lead heading into the final day.

McGowan commented; “Definitely my putting has been my best strength this week. It’s helped me in the first two rounds when I hit maybe six fairways. Even today I hit more fairways but not enough, but I rolled a few nice ones in – a couple of 30-footers – and that kept the score going.

“A win would probably change the outlook for the rest of the year, next year and hopefully for the next few years after that. I’m not getting any younger so it would be quite handy to win one nice and early.”

Big-hitting South African Dean Burmester was the closest challenger on 16 under par, while former Ryder Cup star Nicolas Colsaerts and Germany’s Sebastian Heisele were a shot further back in a share of fourth spot.