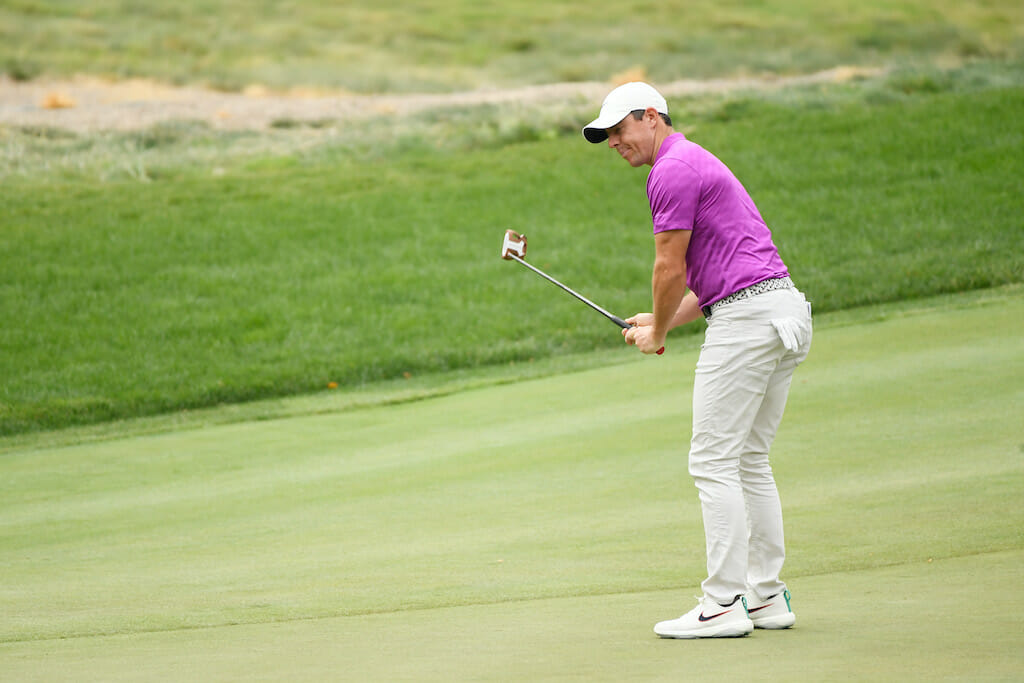 Rory McIlroy’s frustration boiled over when he snapped a wedge in horribly missing the green at the final hole to post a double-bogey on the opening day of the Zozo Championship.

There was clearly enough good golf in McIlroy’s opening one-over par effort but also far too many mistakes on day one at Sherwood.

Any time it looked as though the four-time Major winner would get ahead of steam, a bogey appeared, or worse, winding momentum on a frustrating day for the world number 5.

It was all going relatively smooth to the turn, four birdies and just one bogey on the card, 33 strokes and three-under par, but the unravelling began on the back nine.

He found the rough right off the tee on 10 and compounded the error by finding rough right again with his second before making bogey.

On 11 he got the two way misses going, way left off the tee, then way right before missing a five and a half footer to save par on the par-5.

He made par on 12, had a tap-in birdie on the par-5 13th, then gave that shot away immediately when again he was wild right off the tee and again compounded the error, this time barely advancing his ball in the rough.

He found water on the par-3 15th and failed to get up and down from the drop zone for bogey and while he bounced back brilliantly with birdies on 16 and 17 to return under par for the day until McIlroy hit a horrendous drive right on the last, over trees to an adjoining hole on the Sherwood Country Club course near Thousand Oaks to the north of L A.

He superbly found the 18th fairway slap bang in the middle with his second and just 135-yards from the green. However, he sent his third shot some 30-feet right of the flag and just off the green from where he three-putted for a double bogey ‘6’ – 73 all up, tied 64th in the 77 player field.

SKY Sports Robert Lee tried to put a positive spin post the scenes that unfolded for McIlroy down the last saying: “Rory can come out and shoot a 62 tomorrow but it won’t be today.”

This was after Wayne ‘Radar’ Riley had remarked: “Just a horrible way to finish. Just horrible.  There will be no range. There will be no practice putting green. It will be pack those clubs up and then go back to the digs and cry.”

On the other end of the spectrum, Sebastian Munoz twice holed out for eagle from a combined distance of 219 yards. He also had eight birdies. Throw in a wild tee shot for double bogey, three bogeys and only five pars and it added to an 8-under 64 and a one-shot lead.

“Not a normal round,” Munoz admitted.

That especially was the case for Tiger Woods. For the first time in his 1,277 rounds on the PGA Tour as a pro, he made bogey or worse on three par 5s in a single round. That led to a 4-over 76 — by two shots his worst score in 49 rounds at Sherwood — that left him 12 shots out of the lead.

Munoz, the Colombian who played his college golf at North Texas, finished off his bizarre round by saving par from a narrow section of the front bunker with a 15-foot putt on the 18th hole.

He was one shot ahead of Tyrrell Hatton, the form golfer this month, and Justin Thomas, who had a hot finish. Hatton won the European Tour flagship event at Wentworth, flew to Las Vegas for the CJ CUP and tied for third. Thomas shot 29 on the back nine at Sherwood. They each had a 65.

“I guess everyone kind of goes through phases, don’t they,” said Hatton. “It works both ways. You have bad runs and you have good runs. I guess you just have to try and take advantage of the runs when you feel pretty good. So far, so good for me.

“Hoping that I can kind of play well the next three days and finish off what would be a really good three weeks of golf.”