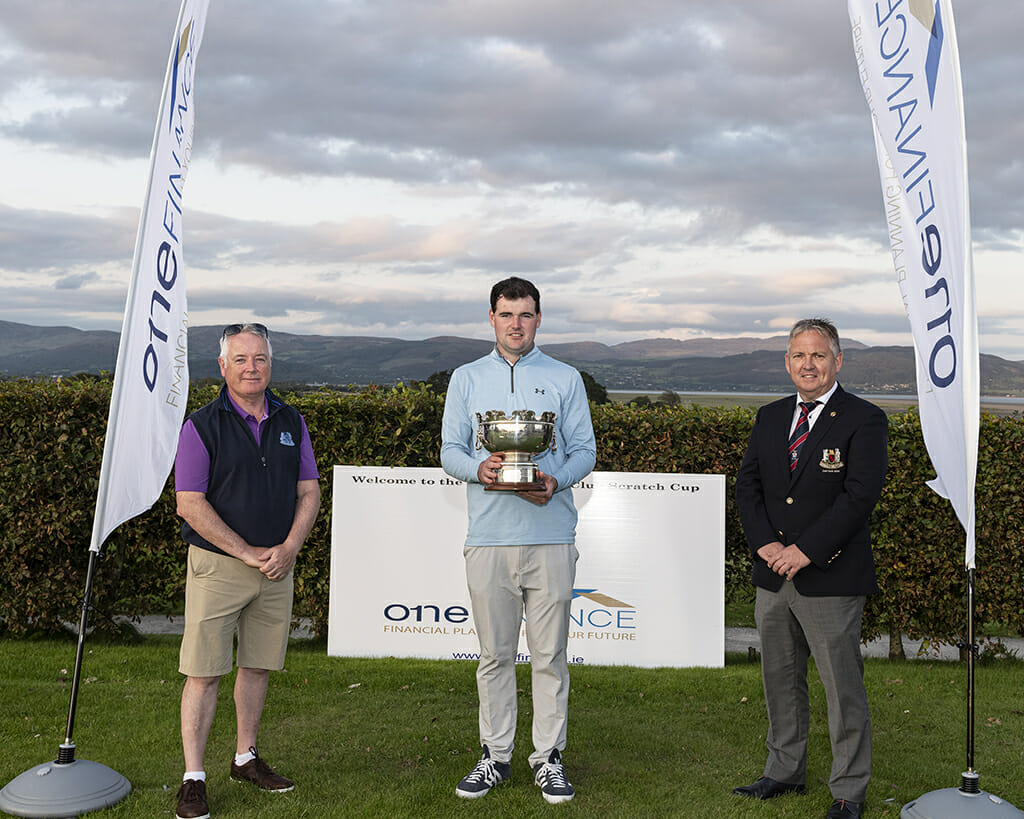 Jake Whelan from Newlands produced a sublime performance to capture the 58th Dundalk Scratch Cup sponsored by One Finance.

The 26-year-old fired two three under par rounds of 69 to win by five shots from Cian Geraghty of Laytown & Bettystown and Roganstown’s Arron Edward-Hills on a day when a strong wind, tricky pins and slick greens presented a formidable challenge for the top class field.

Whelan led at the halfway stage after shooting an opening 69. The Dubliner, who has strong Dundalk connections, was two under after five holes following birdies at the first and fifth but dropped a shot on the par three ninth to turn in one under. Down the back he birdied the short par four 14th and the long par four 16th to come home in 34 and set the pace at three under.

That left him two shots clear of Dundalk’s Aaron Grant, Roganstown Aaron Edward-Hills, the 2018 North of Ireland winner, and Portmarnock’s Geoff Lenehan with Jack McDonnell of Forest Little and Daivd Shiel of Powerscourt a shot further back on level par.

Grant, who won this competition in 2013, opened with a birdie on the 10th, his first hole, but turned level after bogeying the 18th. He responded to that setback with back to back birdies on the first and second and parred his way in to sign for a one under par 71.

Edward-Hills also began on the back nine and got off to a blistering start with birdies at the 10th, 11th, 14th and 15th to lie four under after six holes. A bogey at 16 interrupted his momentum but he still completed his first nine in three under par. He was still three under with two to play, after a bogey on five was cancelled out by a birdie on the par five seventh, but dropped to one under following a double bogey six on the tricky par four eighth where he three putted from close range.

The defending champion, Caolan Rafferty, who was bidding for his third successive title and fourth in all, went out in one under par thanks to a birdie on the par four 11th. However, a wayward tee shot on the first, his 10th, led to a double bogey six and that was followed by a bogey five on the next.

He got back to level par for the round with birdies on the third and sixth but a bogey on the par five seventh meant he came home in 38 for a first round total of one over par 73 which was matched by his playing partner Colm Campbell.

In the second round neither Rafferty or Campbell were able to mount a charge. Rafferty did birdie the ninth to turn level but fell away down the back nine and eventually finished on four over par with Campbell matching him.

Edward-Hills set the clubhouse lead when he carded a second round of level par 72 to finish on one-under and was joined by Laytown & Bettystown’s Cian Geraghty who shot a second round 69 to go with his 74 from the morning. After a bogey at the fourth moved him to three over, Geraghty birdied the sixth, eighth, 12th and 17th to move through to the pack into second.

If Whelan was feeling the pressure holding the halfway lead he didn’t show it. Starting his second round on the 10th he reeled off ten consecutive pars, including a sublime up and down from the back of the first green. Then he holed a long putt from the front of the second, his 11th, for birdie to move to four under.

Although he handed that back at the next with a bogey he showed his confidence on the par five sixth when hit a driver off the fairway from 260 yards out and left the ball eight feet from the pin. His eagle putt didn’t drop but his tap-in birdie brought him back to four under and he then birdied the par five seventh to move to five under before finishing in style by sinking a birdie putt on his final hole, the par three ninth, to finish on six under.

“This is the biggest win of my career,” said Whelan afterwards. “It is one of the biggest Scratch Cups and there are some great names who have won it in the past. I am delighted for my family as we have strong links to the area and my father was a member here.

“I hit the ball well all day and I also putted well for a change,” said Whelan, who added that he intends to keep an appointment he had made last week for a putting lesson on Tuesday with Dundalk professional Leslie Walker.

1st  Round CSS 76 reductions only