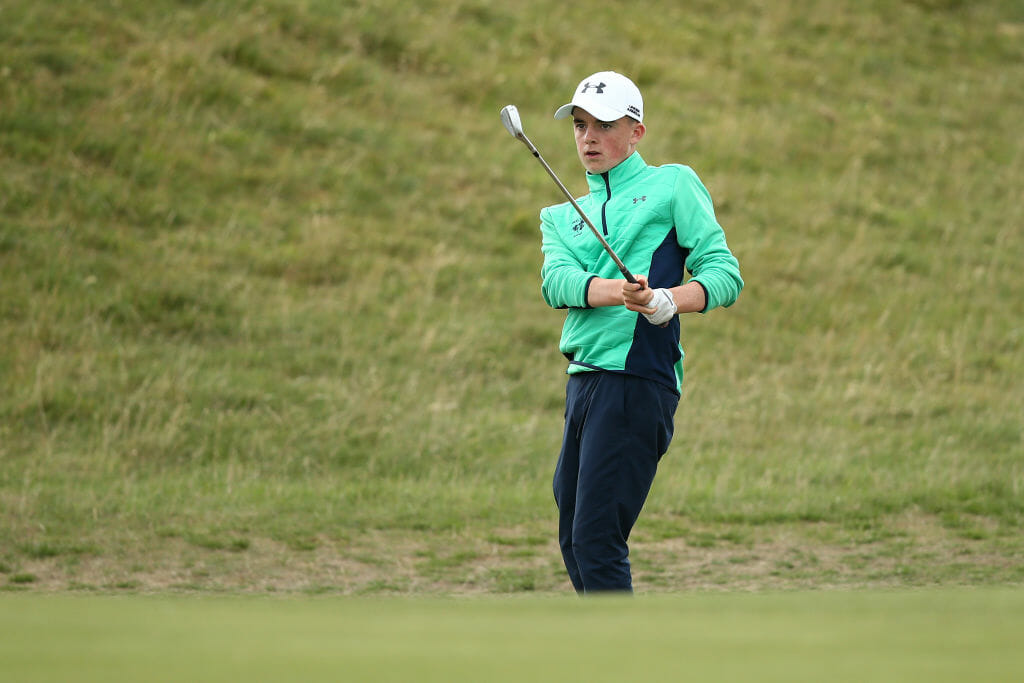 Royal Dublin’s Max Kennedy has Abu Dhabi in his sights once more as he heads into the final round of the Faldo Series Ireland event in Glasson out in front.

The talented teenager fired rounds of 73 and 71 for a two-under par total, going bogey-free around Glasson in round two to head the pack ahead of the final round.

A quick post-round chat with one of our co-leaders and defending Ireland Champion, Max Kennedy…he’s at 2-under going into the final day at @GlassonHotel. Rebekah Gardner and Emma Fleming lead the Girls at +1. Roll on the final day! #FaldoSeries #JuniorGolf #GrowGolf pic.twitter.com/7HLFLoaosb

“Yeah it was great, conditions were nice,” reflected Kennedy. “I played really well today – didn’t have a bogey which is nice for two-under so yeah, feeling good.”

No stranger to being in contention at the event, the defending champion had a very specific plan for how to handle his overnight lead on Tuesday.

“I’ll get a nice dinner,” he added, smiling. “Then I’ll go to bed early, get up nice and early and go play some golf I guess.

As for the series itself, it’s swiftly become a favourite for Kennedy who made the trip last year to the UAE to not only compete but meet the multiple Major champion whose name’s on the trophy.

“The Faldo Series is great,” said Kennedy. “If you win, you get to go to the finals in Abu Dhabi and that’s an amazing trip, probably the best I’ve ever been on. Nick’s there all week, giving tips and lessons and advice so it’s great.”

Rebekah Gardner and Emma Fleming lead the girls heading into the final day where a coveted place in the 24th Faldo Series Europe Grand Final at the Al Ain Equestrian, Shooting & Golf Club, Abu Dhabi in November is up for grabs after today’s closing round.