Rory McIlroy admits he hasn’t touched a club since Thursday’s first and only round of this year’s Players Championship but he’s eyeing up a potentially mouth-watering run of events post-COVID-19.

The world number one has been hard at work in the gym since the 2020 golf schedule was decimated by the outbreak of coronavirus and while some of us are struggling with this time away from our clubs, the Holywood star is embracing somewhat of a second off-season.

“I haven’t touched a club since Thursday at The Players,” McIlroy revealed in a chat with former Liverpool footballer, Jamie Redknapp.

“I’m one of these people who needs something to practice for – I’d rather build myself up to something.

“I’ve realised over these last couple of weeks – I love golf obviously and golf has given me a lot of really great things – but I think I love the competition more. If there’s no competition, there’s nothing to look forward to and I don’t really see the point of practicing.

“If the Tour said to us that we’re going to start again in four weeks, I’d say perfect, and I’d use it as a runway to get ready for things but right now I’m enjoying spending some time at home, getting after it in the gym. Staying by the pool, playing a bit of tennis.

“I realise that there are a lot of us who are very fortunate and we have gyms in our house and all sorts of stuff to keep us busy and a lot of other people don’t have that luxury but yeah, we’re getting on with it and hopefully everything goes back to normality in the next couple of months.”

Had a great chat with Jamie Redknapp the other day. Hope everyone is staying safe at home.@skysports pic.twitter.com/xU7uWnNM05 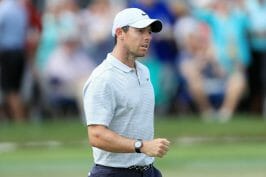 No matter what happens over the next number of weeks, there’ll be nothing normal about this year’s golf schedule with the Masters and the PGA Championship already postponed amid COVID-19.

The Olympics has dropped off the calendar also but it’s the prospect of squeezing all these special events into a bumper final third of the season that has McIlroy excited from his slumber.

“Augusta tend to play their cards close to their chest, they don’t really let much out of the bag,” said McIlroy when asked if he’d heard any murmurings around a Masters reschedule.

“Potentially, you’re looking at four Majors, the Ryder Cup and the FedEx Cup in the space of 12 weeks if it does happen.

“I mean, if we all get back to playing sort of mid-summer, it’s going to be a hectic 12 or 15 weeks with the four Majors, Ryder Cup, and all the big events in the space of a couple of months.”

Hectic it will be but as golf fans in need of a fix, it will be very much welcomed.

Mickelson: World Golf Rankings can keep credibility by including LIV

Winning is all that matters for Harrington: ‘I want to win the Schwab Cup’