Another record in Tiger’s claws 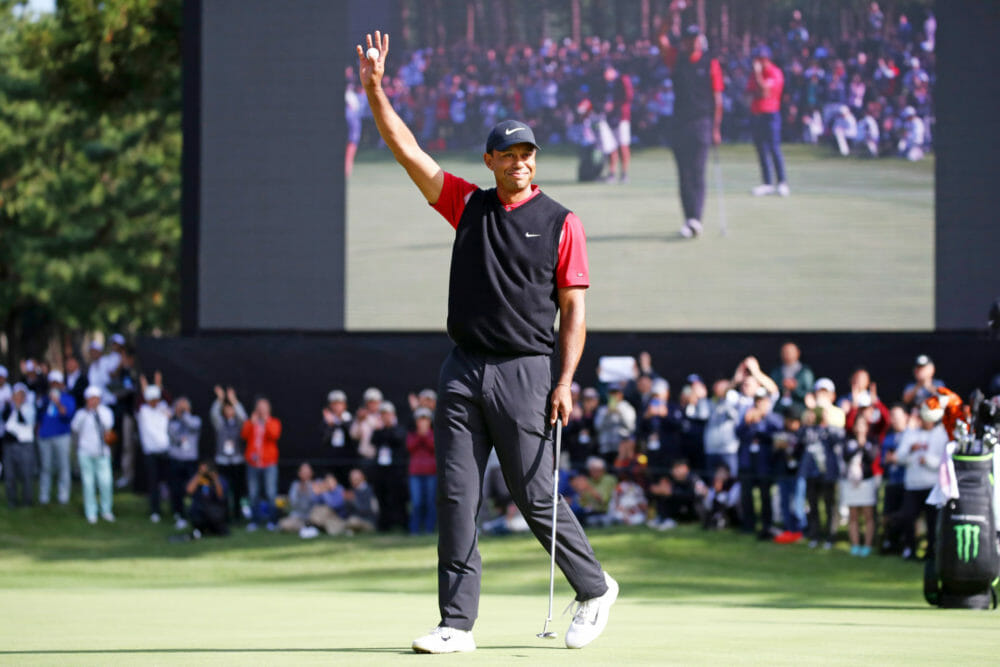 As the Sky Sports broadcast began for the final round of the 2009 PGA Championship, the assembled panel of experts were in no doubt as to whose mantelpiece the Wannamaker Trophy would rest for the following twelve months. To be fair, not many were. 14 for 14 with at least a share of a major 54-hole lead, Woods’ two-stroke advantage over Y.E. Yang and Padraig Harrington seemed the preamble for number 15.

In fact, inside the Sky Sports studio, Mark Roe was willing to go considerably more than one better. With a decade passed since Roe’s decree you’ll forgive uncertainty over the precise wording, but the basic premise was that with Augusta to follow, and the US and British Opens at Pebble Beach and St. Andrews respectively, Tiger could be less than a year from equalling Jack Nicklaus’ record of 18 majors.

With the major record seemingly practically given, the suggestion that Sam Snead’s 82 PGA Tour victories would stand for another ten years seemed every inch as outlandish as a diminutive journeyman from South Korea outgunning the greatest player the world has ever seen.

While few could have foreseen the Y.E. Yang shaped bump in the road, the fire hydrant collision and the scandal it unleashed came as a bigger shock and it threatened to derail not only the hunt for the major record, but for Snead’s PGA Tour record as well. It would be almost two-and-a-half years before Woods would claim his next PGA Tour victory, but two more that year and five the next brought the PGA Tour record to the horizon.

As Woods tapped in for par and a seven-stroke victory at the 2013 WGC Bridgestone Invitational at Firestone, you could’ve got any odds you’d like that that would be his final PGA Tour win, but come May 2017, bookmakers may just have paid out as the footage emerged from Woods’ DUI arrest near his home in Jupiter Florida.

And who could’ve blamed them? Since the start of 2014, Woods had posted just one top 10 worldwide in 23 starts (this includes three appearances at the Hero World Challenge with a field of 20), seven missed cuts, four WDs, and had gone under the knife at least four times.

Throughout his career, nobody has believed in Tiger Woods the golfer more than Woods himself. Even the most ardent fans could be forgiven for throwing in the towel when the man himself began to seriously doubt that he’d ever compete, let alone win on the biggest stage again.

And then came the comeback. The world held its breath (again) with every grimace made, we watched through our fingers every time he took an aggressive swipe from heavy rough. But the omens looked good. He was hitting it long – and relatively straight – if only he could putt like the Woods of old.

And hold his nerve. Having taken the lead with nine holes to go at Carnoustie last year, the giddiness reverberating around the world seemed to get to the man himself and he faltered. He played better at the PGA, but minor errors are often magnified under the intense scrutiny of Sunday at a major, and he fell short again. But he was getting closer.

Victory at the Tour Championship confirmed that Tiger was back, but this year’s Masters rubber-stamped it. The raw, unbridled emotion was infectious and brought tears to many eyes as he embraced his children and long-suffering mother.

But it wasn’t long before the post-mortem began. Just two weeks after winning his fifth green jacket, video footage emerged of Woods attending a Golf TV celebratory event in which the now 15-time major winner walked with all the grace of an elderly hospital patient transferring wards. A bit premature to hit the panic button perhaps, but the subsequent withdrawal from the Wells Fargo championship at Quail Hollow had a lot of fans and TV network officials shifting uncomfortably in their seats.

Missed cuts at the PGA Championship and the British Open sandwiched a rather disappointing finish at Pebble Beach for the US Open (tied 21st but never remotely in contention) before the alarm bells sounded shrilly as he withdrew from the Northern Trust after posting a four-over opening 75.

Whilst most scribes were too coy to begin writing epitaphs again, many were more than happy to speculate that Woods’ fairytale comeback might’ve dampened his hunger somewhat.

There is no better competitor in the game than Woods. And when fit and healthy, there is arguably still no better player. If his body holds up – and that’s a big “if” – then it’s hard to imagine that red shirt not in contention coming down the stretch in at least four or five majors over the next few years.

Snead’s record equalled [it surely will fall] but what of Jack’s? Three majors to tie? That’s the entire major haul of Jason Day, Dustin Johnson and Adam Scott put together.

But who’s writing him off? Only a fool would be burned again.