Defeat for Ireland as rampant England lie in wait 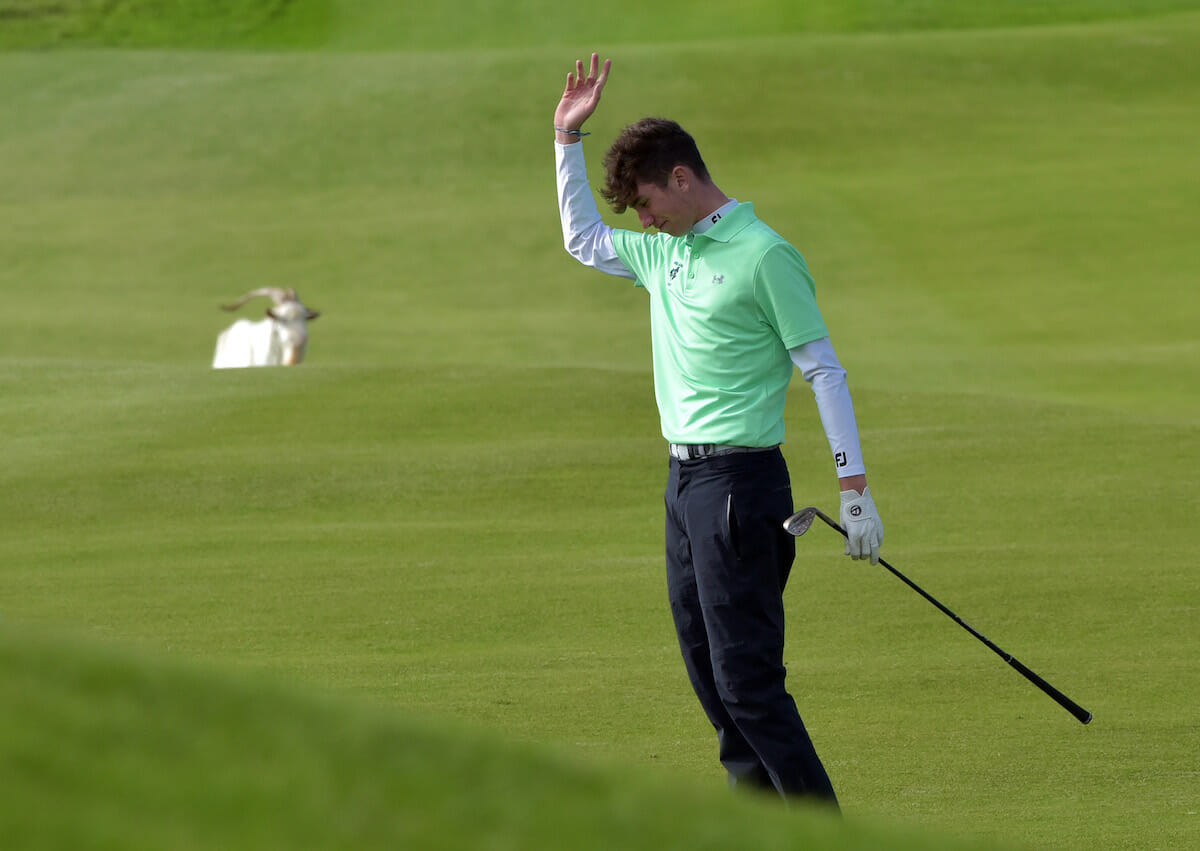 Tom McKibbin (Ireland) holes his second shot to the 9th green watched by one of the Lahinch goats during day one of the 2019 Home International Matches at Lahinch Golf Club. Picture by Pat Cashman

As England made a winning start to their title defence, the hosts suffered an opening day defeat to Scotland at the Home Internationals in Lahinch.

Ireland tied the morning foursomes but floundered after lunch, eventually losing by 8.5 to 6.5. Reigning champions England ran riot in the singles and routed Wales 12-3 having been level at lunch.

“We’re not going to give up,” insisted Rob Brazill. “It would be great if we could beat them.”

“It was hard to watch James, he was in agony,” said Brazill, whose teammate continues to suffer from an ongoing back injury. “He was grand with driver but with irons and wedges, it was hard for him to get down to the ball. I know how good he is and I could see he was in a lot of pain.”

Sugrue had to sit out the singles and has been replaced by Matthew McClean in the foursomes lineup to face England. McClean, like Brazill, had his first taste of the Home Internationals against Scotland and salvaged a half when making a gutsy birdie four at the last.

“I made three birdies on the way in to get the half match, which feels good for me but unfortunately it’s not good enough,” McClean reflected.

Watched on by his father, Noel, and some travelling Malone members, McClean savoured the occasion as much as possible.

“I think I’m the first Malone member to play for Ireland since 1978,” McClean revealed. “Half a point feels a lot better than zero but I think even if I had won, it may not have made the difference overall anyway.”

“When you lead from the front you get momentum,” Clark explained. “To beat Ireland in Ireland is a rarity.”

Clark, at 37, more than twice his opponent’s age, secured a crucial win against Tom McKibbin (16) in an enthralling contest. Although three clear after four, Clark found himself three down after 11. He battled back and won the next four holes to turn the tie.

“Four halves in 18 holes so between us we played either very good or very bad and they tended not to be at the same time,” Clark reflected. “He’s obviously a rising superstar of Irish golf. More importantly, he’s a very, very nice young man. I enjoyed it. He’ll take it tough. He’s been beaten by an old, fat man effectively but that’s part of the game.”

Anchorman Colm Campbell, who partnered McKibbin in foursomes, was the only other successful Irish player in singles.

Life at Lahinch, for the champions, was a breeze in the afternoon. England took 9.5 points against Wales in the singles and are well placed to retain their crown.