Portrush stage set for The Open of a lifetime

My first memories of Portrush were as a ten-year-old being driven by Sutton’s gentle giant Captain, Alex McNulty with my mother and brother Joe. D to watch my father play the final of the British Amateur Championship in 1960.

My father told my mother privately before the event, ‘don’t come up until the final!’ He had hit 58,000 drives that winter wearing out two of his Lambert Topping persimmon drivers in the process and spent hundreds of hours chipping and putting under lights on the second green at Sutton after his workdays at the drapery store.

In his mind, nobody could beat him over Portrush. It was a links he adored playing with his prodigious length, cutting the corners of the gorse framed doglegs and dominating his opponents on this Harry Colt masterpiece. Two busloads of Sutton members had also travelled up to see him demolish the ageing American, Bob Cochran in the twilight of his career by 8&7 in the 36-hole final. 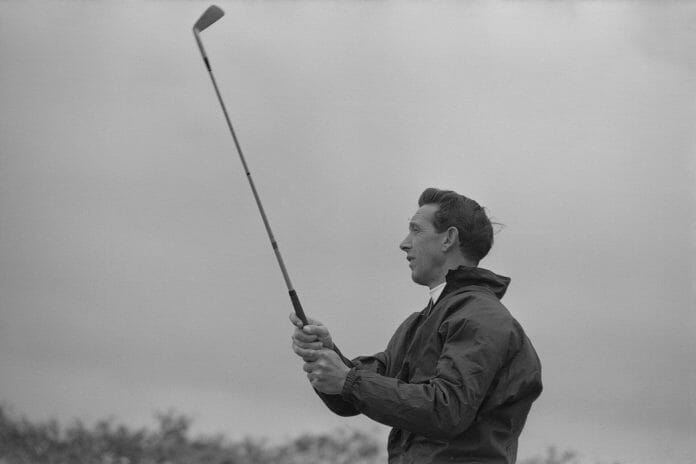 It was his third and last British Amateur title and that memory inspired me to try to follow in his footsteps. Ten years later I was beaten on the 20th hole in the final of the North of Ireland Championship by local hero Johnny Faith at Portrush, and like my father, fell in love with this great ‘high dunes’ links classic, which now, the whole world will finally get to see and appreciate for the first time.

This year, Brandon Wu from Stanford will play Portrush and will be the first amateur to qualify for the US and British Opens in the same year since my father did it in 1967!

Due to the close links of the Carr Family to Portrush over the years, I was asked to speak at the Captains’ Dinner several years ago. I needed to speak to someone that had played the 1951 Open. I called the great John Jacobs, father of the European Tour, who at 83 at that time was confined to his bedroom in his Stable Cottage in England.

I called him; “Jake, (as we called him) you are the last man standing from the ‘51 Open at Portrush – tell me what it was like?”

His ever-alert mind chirped up with the memories flashing back:

“We had such a great time. Dai Rees and I shared a room in a guesthouse on the seafront in Portrush, went out every night and enjoyed the warm Irish welcome, especially from the local cailíns. We wanted to stay the weekend but we were ‘expected’ back in the shop at our clubs in the UK on Saturday morning by our members, Open or no Open!”

The Open in those days finished after 36 holes on Friday. The flamboyant and eccentric Max Faulkner, wearing his colourful plus fours fulfilled his life’s ambition by winning The Open that year by two shots and was in his shop in London the next day!

Portrush Golf Club, like St Andrews in Scotland, is part of the fabric of the town and indeed the stunning Antrim coastline with its Giant’s Causeway and famous Bushmills Whiskey distillery, one of the oldest in the world. It is a town of the people of Northern Ireland, many of whom holiday there in their caravans and mobile homes on the hillside overlooking the famous Dunluce Links. The people are modest, friendly and welcoming and oh so proud of their ‘jewel’ in the crown.

The Irish Open was played at Portrush in 2012 for the first time in over 50 years as the forerunner and test for hosting The Open. I will never forget the look on the faces of Peter Robinson and Martin McGuinness, the two leading politicians in the North, on the first morning of the Irish Open.

They both arrived with their entourage to the top floor of the European Tour marquee overlooking the old 18th hole. They were totally gobsmacked when they looked out over the first hole at the sea of people that had come out for the first time in thirty years to celebrate their own Major winners and heroes.

A little later, I was standing by the starters hut watching as each of their Champions led by Darren, Graeme and Rory made their way to the first tee to join their trophies and awaiting dignitaries. Harrington was the last in the parade and got the warmest and longest welcome. It was the North’s way of making their own statement. Golf, like Rugby, is an all-Ireland sport.

I welled up as I fully understood and grasped the poignancy of this moment in our history. The power of sport in bringing people together like the Rugby World Cup had done in South Africa. What a moment. The performances and behaviour of Graeme, Darren, Padraig & Rory, in particular, helped greatly in getting The Open to Portrush.

I have a date with my friend David Sterling to be in the same spot for the first tee shot of The Open on Thursday. It is a momentous week for Northern Ireland to host the greatest golf event in the world and to be seen all over the world – at peace.

It may not be such a peaceful week for our homegrown heroes – unfortunately. They will want to do well so badly it will hurt and therefore be hard for them to stay relaxed, in the moment and focused. The encouragement and aspirations of the home crowd compound the pressure to do well, to try too hard and not ‘let it happen’.

Rory in his blissful youthful uninhibited state at 16 shot 61 around Portrush. It sent a ripple around Ireland and a marker of what was to come. He’s playing the best, most consistent golf of his life at present and perhaps this week he too will fulfil his boyhood dream of winning The Open at home.

It will be fascinating to see how Tiger tackles Dunluce, as the course is known. You can be sure he has done his homework and this course suits truly great players, the likes of Nicklaus and Tiger.

The risk/reward decision making for the fearless bombers will also be interesting. Gorse takes no prisoners and there is plenty of the rich yellow thorny bushes defending the course. Bravery is rewarded – stupidity and recklessness are punished ruthlessly. Many of the best-seasoned players will come in under the radar, which they love. No distractions as they hope for a favourable draw with mother nature as they watch for the times of the high & low tides.

It’s the kind of course that suits a certain player’s eye, which is hugely important as it was for my father and Max Faulkner. Listen carefully for that phrase this week before the kick-off.  The Open being played in Northern Ireland is a gamechanger. It will be celebrated far and wide and enjoyed with a sense of pride by all Irish men and women North & South at home and abroad.  It would be the icing on the cake to have an Irish winner.

Special mention of thanks to the small group of people, many of them great friends, that made this happen. Especially Wilma Erskine.