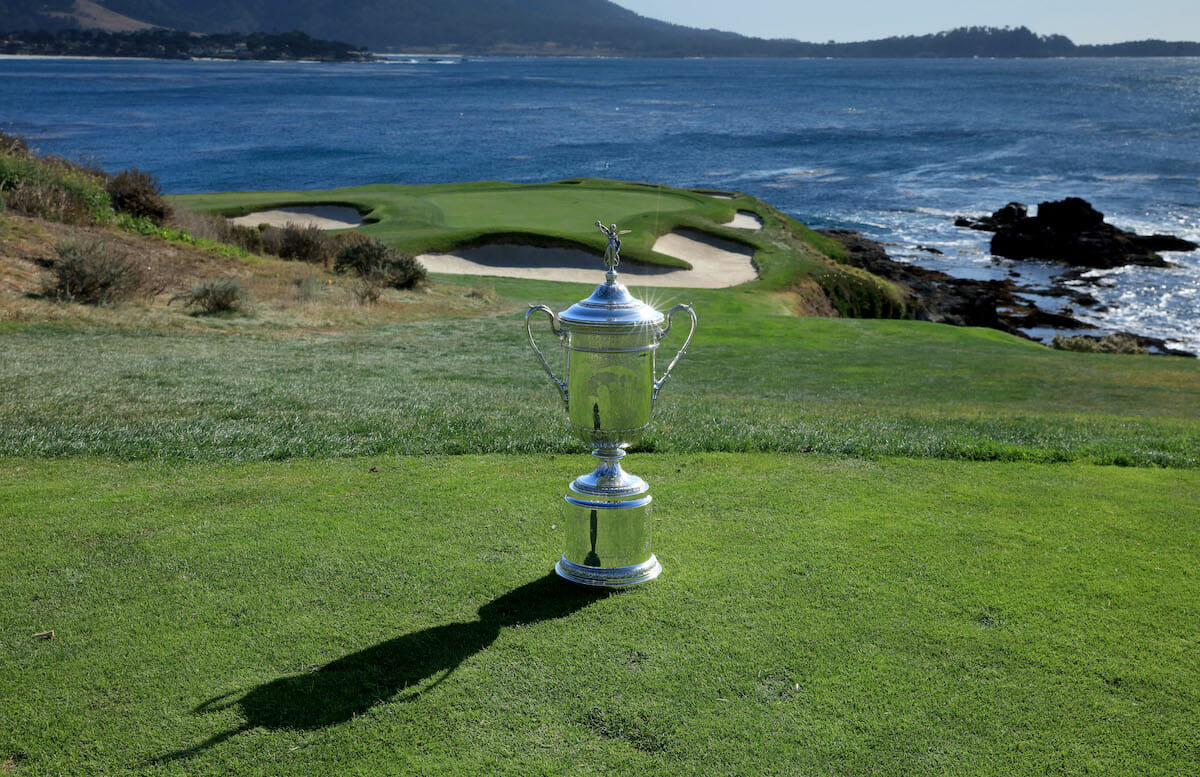 The US Open Trophy at Pebble Beach

From the age of nine, I have had an image of the 18th hole at Pebble Beach imprinted in my mind. It came from one of two big murals that hung in what we called ‘the billiard room’ of our house, ‘Suncroft’, that overlooked the second green on Sutton golf course in Dublin. The other mural was of the spectacular par-3 16th hole at Cypress Point; one of the world’s great par-3’s.

The reason they were there is that my father, at his peak, having won the British Amateur in ’53  ’58 & ‘60, had returned from playing the US Amateur at Pebble in 1961, where he had struck up a friendship with a young American amateur that would endure for over half a century and to this day is carried on between the families.

He fondly told the story of being beaten in the semi-finals by Dudley Wysong to deny him the privilege of making it to the final to face certain defeat from that young American amateur, whom he described upon his return to Ireland as “playing a game that we are not familiar with”.

It was Jack Nicklaus. That trip and the Monterey Peninsula had made such an indelible impact on my father that he commissioned the two Monterey murals.

Samuel F.B Morse was the visionary behind the creation of Pebble Beach in 1919. He brought in Jack Neville, a two-time California Amateur, to design the course. Morse was insistent that there be no housing on the golf course but that it had to be inland on the now famous and picturesque 17-mile drive, which was a big tourist attraction in the early 1900s.

There is something about Pebble Beach Golf Links that makes it iconic. Pebble Beach is the site of the AT&T Pro-Am which is played every year on the Monterey Penninsula. The event is now famous for attracting the biggest celebrities since it was started over 70 years and was originally known as the Bing Crosby. Carr Golf recently held a special 30-year anniversary Father & Son event at Pebble Beach to celebrate.

The setting is breath-taking as it hugs the rugged coastline and has wide open views of Stillwater Cove, opening to the Pacific Ocean on the south side of the Monterey Peninsula. The whole atmosphere of the place, carved out of mother-nature, provides one of the greatest tests in golf which remains open to the public. Like Augusta and St. Andrews, Pebble Beach has provided iconic memories over the years when hosting the US Open.

Who will ever forget Jack’s one iron – stiff- into the teeth of the breeze on the 17th to a front pin to win the US Open in 1972? Or Tom Watson’s chip-in from the back left of that same green and the spontaneous joyful dance around the green afterwards on his way to beating Jack Nicklaus in 1982?

I remember Peter Allis, the Don of golf commentating, telling me how frustrated he was that he was covering the 18th hole that year. He never got to use the classic line he had used on BBC to describe Watson’s crisp 8 iron to three feet against Jack in their epic shootout in the Open at Turnberry when he commented – after letting the crowd fall into silence…… “elementary my dear Watson”.

Pebble granted Tom Kite his only Major in 1992, a kiss goodbye after 20 plus years trying to get the ‘never won a Major’ monkey off his back. For Irish eyes, it will be the picture of Graeme McDowell with his ‘mighty atom’ pose on the 72nd hole having sealed a courageous victory on Father’s Day in 2010

One feels this week she may once again bestow her blessings on someone like Rickie Fowler, who carries the same burden as Kite did, or will she allow Phil to become immortalised in golf’s most elite Club by completing his dream of golf’s grand slam? Phil is all too familiar with Pebble with his annual attendance and success at the AT&T.

On the other hand, she may, with the help of mother-nature, decide to tame the beasts that have been overpowering and laying waste to even the most feared Major courses like Bethpage Black. Pebble Beach is not a long course, therefore, diminishing the advantage of length. The key is recognising the small green complexes and therefore the accuracy demanded on approach shots, which must be made from the short grass. The field will be hitting irons off the tee 7 plus times and will have wedges to 8 or 9 greens a round.

Tiger feels at home here and, like Augusta this year, will be patient and conservative to try to grind himself into contention for the last nine on Sunday. If he plays as well and smart as he did at Augusta, it’s hard to see anyone beating him. Remember he won here by 15 strokes in 2000 and is again on the prowl.

Phil has decided he is ‘going for broke’ as Arnie did and he could go down in flames if his attacking strategy, that worked for him at Birkdale and Augusta, fails.

The refreshing ‘pull the trigger’ Brooks Koepka will freewheel it all the way but may not have the game suited for Pebble Beach.

US Opens more suit the dogged & consistent game of a Justin Rose who has disappointed in the first two majors of this year. Pebble’s linksy characteristics will suit his eye.

For Rory to win he needs a form run like he hit at Kiawah Island In 2012, to blow the field away. He hasn’t had one like that in years in a Major but will be full of confidence after his Canadian Open win.

DJ can set himself up with his 260-yard driving iron off the tee and use his improved wedge play and distance control to get the job done and has prevailed at the AT&T before.

Spieth is showing the same gritty determination he did after his collapse at the Masters to go on and win the Open. His putting is back and nowhere is putting more important than at a US Open and Jordan’s already a winner on the Pebble Beach Links too.

Meanwhile, Matt Wallace showed passion, grit and talent at the PGA. Des Smyth reckons Matt will be the next big name out of the UK in years to come.

From everything I hear, I like Tommy Fleetwood who is one of the best controlled short iron players in the game and deadly accurate with that mini ‘stinger’ he uses off the tee.

The US Open has had some strange winners over the years; Andy North (twice) Geoff Ogilvy, Lucas Glover & Webb Simpson in recent years. It has also seen some epic collapses, most notably Arnold Palmer’s 7 shot lead over Billy Casper with nine holes to go in 1966.

But whatever happens, one thing for sure is that there’ll be plenty of drama this week; hearts will be broken and dreams will come true. For whom we do not know yet – but it will be fun watching.