Secure your tickets to the 148th Open at Royal Portrush now 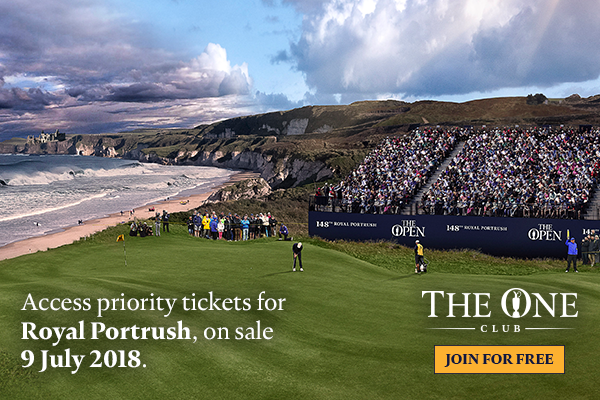 Fans eagerly anticipating the playing of The 148th Open at Royal Portrush can now sign up to The One Club to gain exclusive access to priority tickets when they go on sale on Monday 9th July.

Golf’s original championship returns to Northern Ireland for the first time since it was played on the only occasion there in 1951 and is set to be the largest ever sporting event staged on the island of Ireland.
The R&A is launching ticket sales earlier than ever before to meet the expected demand as the Championship moves to an all-ticket model for the first time in its history with sell-out crowds anticipated at Royal Portrush.

A variety of different ticketing options and early season prices will be available when they are released to members of The One Club on 9th July, including Daily Tickets, Weekly Tickets and Weekend Bundle Tickets. For under-25s, The Open is more accessible than ever with Youth Tickets available at reduced prices. Children under the age of 16 will continue to attend free of charge thanks to the Kids Go Free initiative.

You can join The One Club for FREE by simply registering their details online at HERE and you will be among the first to have the opportunity to secure your place for the historic return of The Open to Royal Portrush.

Johnnie Cole-Hamilton, Executive Director – Championships at The R&A, said, “There is great excitement among golf fans at the prospect of The Open returning to Royal Portrush and the anticipated high demand for tickets has prompted us to offer our most loyal fans exclusive access to priority tickets for next year’s Championship.
“Northern Ireland has a renowned reputation for having some of the world’s most passionate and knowledgeable golf fans and I am sure that they will not want to miss out on the opportunity to be part of this historic occasion when The Open is played there for the first time in almost seventy years.”

John McGrillen, Chief Executive of Tourism NI, said, “The tourism industry across Northern Ireland is preparing to support what will be an unmissable event next year and the early release of tickets for The Open will step our plans up another gear.
“We also take confidence from the fact that our increased golf visitors last year contributed £40 million to the economy and this figure will grow even more rapidly following The 148th Open at Royal Portrush”.
The One Club enables fans of The Open all over the world to get even closer to golf’s original championship. By joining The One Club, fans can become part of a community able to access a range of exclusive benefits and experiences, including priority tickets, offers and competitions and video content.
For more information click HERE