The day the little minnow took on the Great White Shark 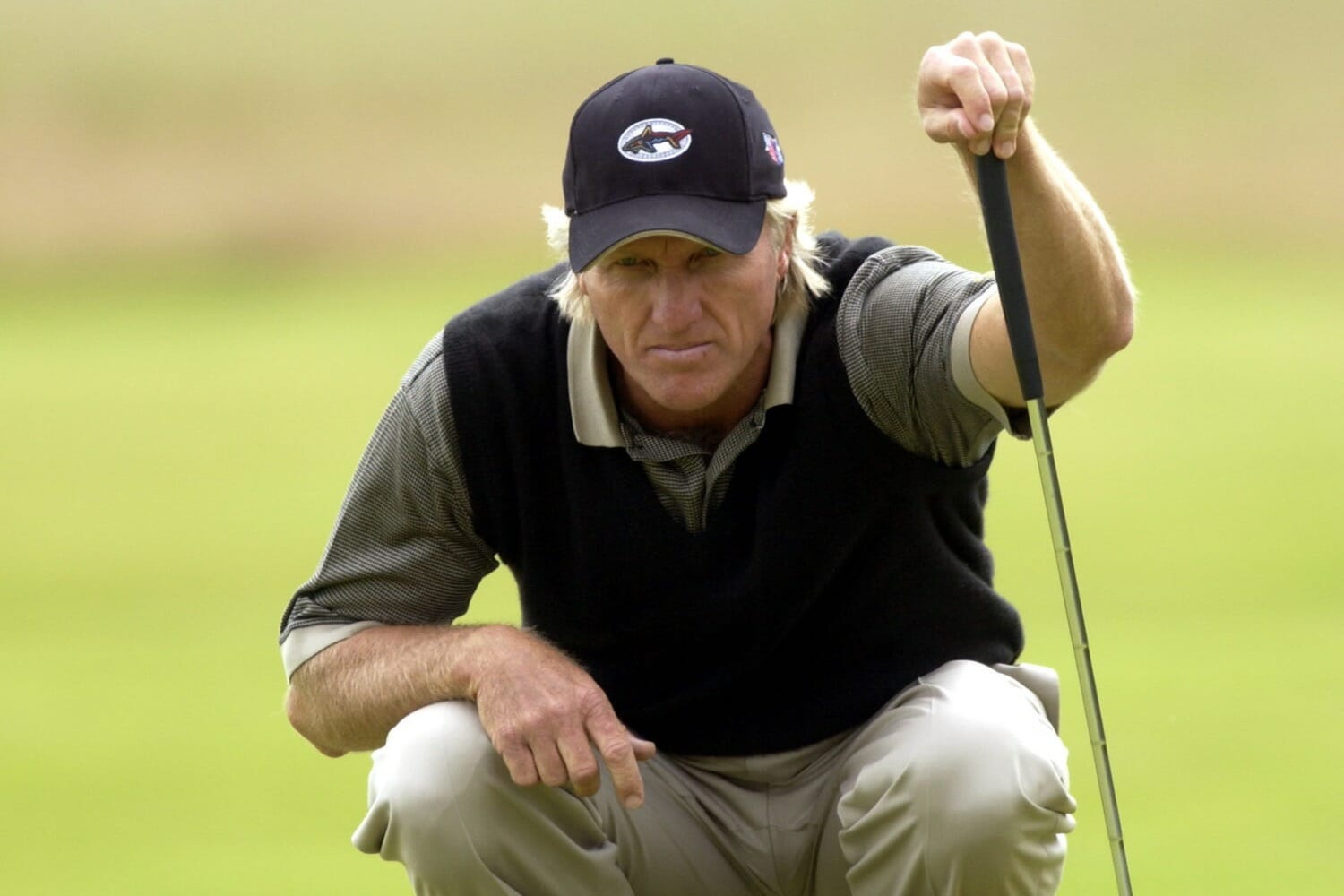 Greg Norman has played gazillions of pro-ams in his long career and seen some brutal golf played by the hackers in his company, but he appreciates the unique opportunity that these events offer starstruck amateur golfers.

Norman, speaking of the pro-am genre, commented: “Golf is the great connector of life with individuals.”

“You play with some very, very poor golfers, but when they get to the first tee and they beat you on one hole out of 18 because of their handicap; or they out-drive you because they have a 40-yard advantage, and they hit a perfect drive, they actually feel fantastic.”

“I feel great for them, I really do. That one shot will bring them back and they will talk about that one shot forever and a day.”

Anyone playing in the Great White Shark’s company is going to feel overawed. I know. I was one of those soldiers.

The opportunity arose as part of the opening celebrations of Doonbeg – now owned by You-Know-Who – in July, 2002.

Norman had designed the course, which has, of course, since been massively overhauled at the behest of the You-Know-Who organization, but on that glorious day almost 16 years ago, Greg was the proud creator of the new links in County Clare.

We media folk were playing in fourballs, and each fourball would get four holes in the company of the Shark. Me, the Little Pale Minnow, then off 15 handicap, got ready to take on the Great White Shark, and did so with my usual level of top class mental and physical preparation.

That meant I sallied forth from the locker room of Doonbeg in a lather of sweat, with the muck of three months soggy parkland golf on the clubheads, the shoes creased and worn, and me fumbling for balls and tees and with the mind racing forward anticipating disaster.

And I made sure to use ‘old’ golf balls. Couldn’t bear the thought of losing shiny new ProVs, even in the company of a two-time Major champion.

Our group was to play holes nine through 12 with Greg.

After introductions came the tee shot on the ninth, then a par-3 measuring 110 yards. Palms sweaty, heart beating, legs slightly rubbery, and the swing thought was highly professional, i.e “Swing fast, get it over with.”

I sliced the ball well short, and glanced around to see the reaction, but Greg was looking out to sea. Got a bogey on the hole.

The 10th, dog-leg left, par-5. Greg’s tee was 100 yards behind ours. He smashed a beautiful drive into the middle of the fairway, then came up and gave us the line. “There’s loads of fairway out the right hand side, you don’t want to be left.”

“Okay,” sez I, and promptly pull-hook the ball out to the left.

It’s heading for red stakes and might be in trouble. There’s a low wall up there too, but as we get closer, the ball is playable.

Then my caddie – bless him! – whispers: “You outdrove him.”

Yeah, right, bar the slight advantage of teeing off 100 yards ahead of our Greg, but still….and then comes reality.
“You got a nice bounce off that wall, Liam,” says the Shark. Harsh, but true. Thanks Greg. Rain on my parade why don’t ya!

His tee is way behind ours. Again, his ball flies long and true, and it ends up at the back of the green. Me? Typical hacker, I play the shot I never practice and rarely hit – the classic links punched shot under the wind with a seven iron. Much to my amazement, the ball flies off the clubface beautifully, and lands about 12 feet from the hole.

“Nice shot, Liam.” My chest swells. The seal of approval from Greg. Then, aarrgh, the pressure level soars when he says: “Come on, Liam, roll it in now.”

Jeez, Greg.  Sweaty palms, heart racing, I know in that instant, that my little left-to-right slider birdie putt is never going to fall in the hole. But I got it to a foot, and holed for a ‘mere’ par.

I finished out the 12th with a par-4, which was something of a minor miracle, and, before we parted company, I had the temerity to ask Greg for a putting tip. He graciously obliged.

The tip? “Most people quit on the putt and don’t follow through, so get the club head going all the way to the hole.”

It has proved its worth to me many times since then. Thanks, Greg, and thanks for great memories.