What’s your name? Sorry but how do you spell that?

Rory McIlroy’s new season if off to a flyer and that’s more than can be said about the simple task ordering coffee.

The current World No. 8 has always found trouble with those around him either trying to spell or pronounce his surname.

There was the embarrassing scenario ahead of the 1997 Walker Cup at Royal County Dow n McIlroy was presented with his GB & I golf bag and with his name spelt – McLlroy.

At the 2011 World Cup of Golf at Hainan Island in China, McIlroy was introduced on the first day as:  “Next on the tee, Rory McRory”.

Now Starbucks, and one of the biggest coffee shop outlets in the States, got McIlroy’s Christian name wrong when he ordered a ‘Grande Skinny Mocha Latte’.

It is practice for Starbucks staff to write the name of the shopper on the cup and when McIlroy was handed his coffee, the name ‘Rori’ had been penned on the cup. 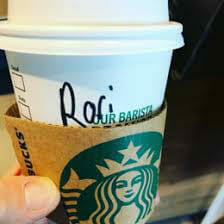 McIlroy went onto social media to comment:  “Rori.  To be fair it could have been worse”.