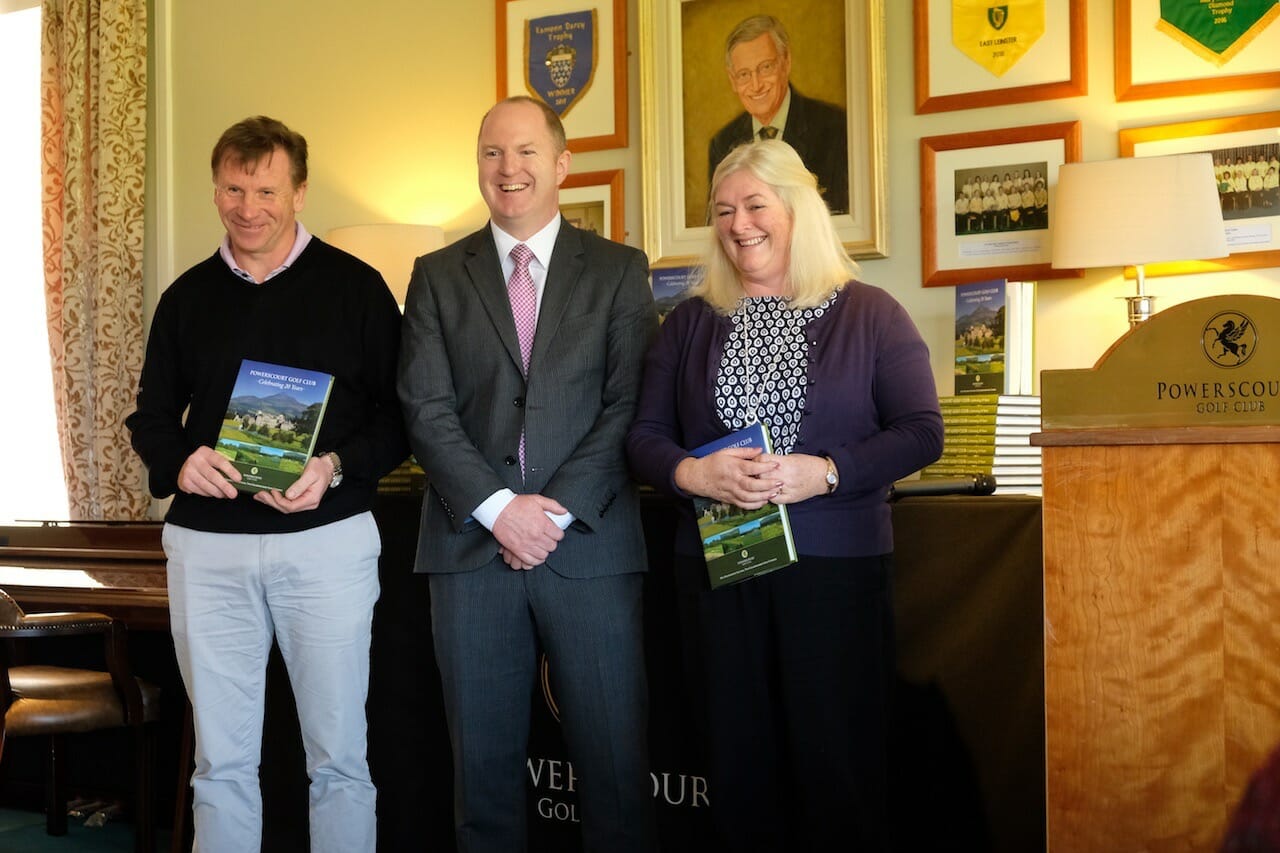 It has been a busy year for anniversaries. Clubs across the country have been celebrating a whole range of ages in numerous different ways.

Last Friday, Powerscourt Golf Club launched a beautiful hardback book to signal the 20th anniversary of the club’s foundation. It is not inconsequential in size, stretching to 248 pages, with hundreds of photos and contributions from many involved in the club’s evolution. It is a comprehensive piece of work.

The launch took place in the clubhouse with dozens present, including the Slazenger family. Indeed, the book is dedicated to Dr Michael Slazenger, the man who started the club on the grounds of the Powerscourt Estate. As speeches were made, the sun lit up the two courses outside the windows, showing off the autumn colours and where the trees felled by Ophelia had long since been cleared away. This is a strong club with both courses embraced by ancient trees. Ophelia managed to snatch just five and will merit only a mere mention in a future chapter as the club looks forward to its next 20 years.

Other clubs celebrating 20 years include Esker Hills, Galgorm Castle, Newbridge, East Clare, and – hard to believe – Old Head. Clubs which have reached the quarter of a century milestone are Roe Park, St. Margaret’s, Waterford Castle, Charlesland, Castle Barna and Slieve Russell. Charlesland celebrated their anniversary with a series of golf events… but, more telling, the year also saw the completion of a €1 million investment in the course which saw a short game academy introduced and two new holes.

No clubs are celebrating a centenary in 2017, while the 9-hole Dunmore, in Clonakilty, is the lone club with 50 years to its name.

There is a glut of clubs who had their 125th anniversary, however. Athlone, Co Louth, Fermoy, Lahinch, Malahide and Roscrea. Some had big celebrations while others were more low-key.

Athlone held a celebration lunch for members in the Hodson Bay Hotel, back in April. The club’s centenary book, written by club member, Tom Collins, now has an addendum. Other than an invitation event, run in May, there was nothing else of significance.

Co Louth ran a week in June for members and guests, and created a unique calendar with each month’s photo dedicated to a different decade of the last 125 years. The club has also invested heavily in a sparkling new short game area (including three greens) next to the clubhouse and a new parking area. Both of these give a better taste of the course and what is to come.

Fermoy, so battered by Ophelia, held a whole range of events. There was a summer family day of golf and entertainment, concluding with a barbecue and the unveiling of a commemorative plaque. A time capsule was also buried. There was a par three competition which used the entire 18 hole course and was open to clubs in the region. The club commissioned prints of signature holes and golf merchandise – ball markers, golf balls, etc. – commemorating the 125th anniversary.

Lahinch ran numerous events, including the publication of a book entitled ‘125 Years of Golf at Lahinch’, as well as unveiling a bronze statue of a ‘goat rampant’ by the 1st tee. Former South of Ireland champions were invited to a day’s golf and dinner on 31st July. Paul McGinley, one of those former winners, was the guest of honour.

Malahide’s main celebratory event was a mid-summer BBQ, which saw the opening of four new holes (by Martin Hawtree) and a new pitching green.

Roscrea did not hold any significant events… no doubt waiting for their 150th anniversary instead.