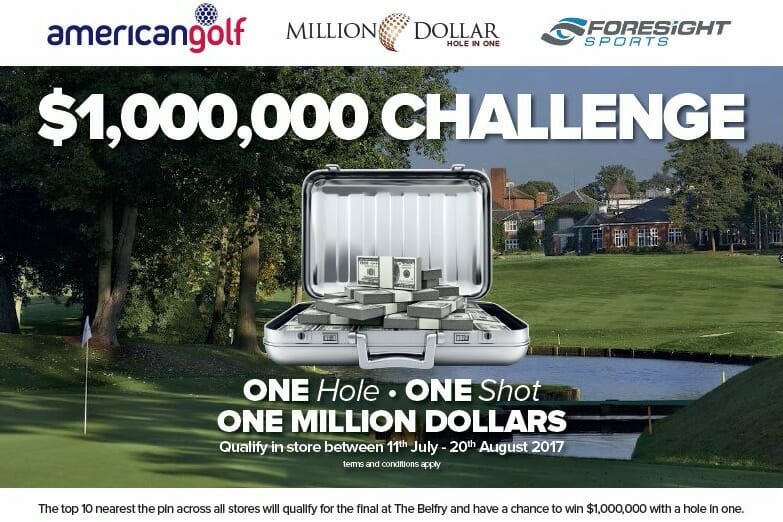 American Golf is inviting golfers across the UK & Ireland to enter its biggest ever competition and be in with a chance of scooping a staggering 1 Million Dollars.

American Golf has teamed up with Million Dollar Hole In One (MDHIO), the company that runs the popular par-three, hole-in-one-challenge around Europe, to give golfers the chance to win the bank-breaking prize during American Golf’s Championship finals at the Belfry in September.  10 players will be given one shot to score a hole-in-one and win the $1million prize.

Qualifying for this phenomenal competition begins today, July 11th and will take place in American Golf stores across the UK & Ireland. Using the Foresight GC2 simulator, entrants will have three attempts to get nearest the pin on the 7th hole at the Belfry’s world-renowned Brabazon course.  The Foresight Sports’ golf simulator offers the most accurate camera-based ball tracking data on the market, coupled with advanced imagery software that brings playing the hole to life. It’s used on a regular basis by many of the world’s leading Tour players and coaches to replicate play on the toughest championship courses around the world.

When the competition closes, on August 20th, the 10 closest players will progress to the grand final to take on golf’s ultimate $1m shootout:  One shot to make a hole-in-one and take the jackpot home.  “This is a life-changing prize,” said Daniel Gathercole, director of marketing and communications at American Golf. “A hole in one is the holy grail of golf. Some would argue it’s luck more than judgment that gets the ball in the hole first time, but, ultimately, it doesn’t matter how you do it. We just hope someone has the nerve, skill and luck to hit a hole in one and win the $1m jackpot.”

The prize shootout will take place on the iconic 10th hole on the Brabazon, the scene of many memorable Ryder Cup tee shots.  But American Golf won’t even be expecting any Seve’esque heroics from 300 yards. American Golf shortened the hole, and the odds, with a bespoke 150-yard tee-shot that will give contestants a real chance of holing their shot and changing their lives forever.

MDHIO director Martin Tyrrell added, “We have been running our hole-in-one competitions in Europe for more than 12 years now and they have always been hugely popular with golfers of all levels.  Holes-in-one may not happen to amateur golfers every day, but they do occur – more often than you may think and regardless of handicap.  That is why the concept is so successful.  By joining forces with American Golf, even more people will get the chance to shoot for $1m this year, and it would be fantastic to see someone walk away with a cheque at the Belfry.”

All Irish American Golf stores are holding qualifying events and check out the leaderboard simply visit www.americangolf.co.uk/milliondollar You can also follow all the action @AmericanGolf_UK using #AGMillionDollarChallenge