It’s fair to say 2022 was the year of the red face as TaylorMade dominated the retail environment with one of the best visual and performance tech stories in recent memory with Stealth. It featured the first-of-its-kind lighter and faster 60X Carbon red Twist Face. The boldest claim TaylorMade made with the introduction of Stealth was that they had maximised titanium faces and all future TaylorMade drivers would start with a carbon-face as they look to delve deeper to unlock further advancements with this technology.

True to their word, TaylorMade say that carbon-faced driver performance is just getting started as they introduce the Stealth 2 Plus, Stealth 2 and Stealth 2 HD drivers.

The days of claims of 10 yards longer than last year have long since gone as driver technology crept right up to – and sometimes even beyond under current R&A guidelines for driver tolerances. Remember face speed injection!

Cast your mind back 12 months, TaylorMade undoubtedly unlocked speed with its new red face but those claims were of just 1.3mph faster than the titanium of SIM2. It may not sound like much but that extra speed from a new material with endless angles to improve was huge and for 2023, TaylorMade have refined the overall package to be much more forgiving as Stealth 2 Carbonwood drivers combine the speed of Stealth with technological advancements that create a new level of forgiveness.

TaylorMade are calling it Fargiveness.
Building on the speed producing success of the original 60X Carbon Twist Face that optimised energy transfer for fast ball speeds, the new face design in Stealth 2 features an advanced version of Inverted Cone Technology (ICT). The new ICT is designed to maintain ball speed on off-centre strikes and increase forgiveness, or as you will hear a lot with Stealth 2, Fargiveness.

A more pronounced ICT produces a thinner face on the edges and a thicker centre face, engineered to spread speed around the perimeter. Stealth 2’s face weighs just 24g (2g lighter than the original Stealth face) and is designed to have an expanded COR area for a larger sweet spot and boosted performance across the entire face.

“There are two main ways to produce forgiveness in a driver, by optimising the face and by optimising the body. Building off the 60X Carbon Twist Face in the original Stealth that led to ball speed gains for golfers across various skill levels, with Stealth 2 we challenged ourselves to bring more forgiveness in each of the three models. We accomplished that through introducing our modified face construction focused on forgiveness on the outside of the face, and a brand-new carbon-based modular body construction.”
– Tomo Bystedt, Senior Director Product Creation, Carbonwood and Metalwoods 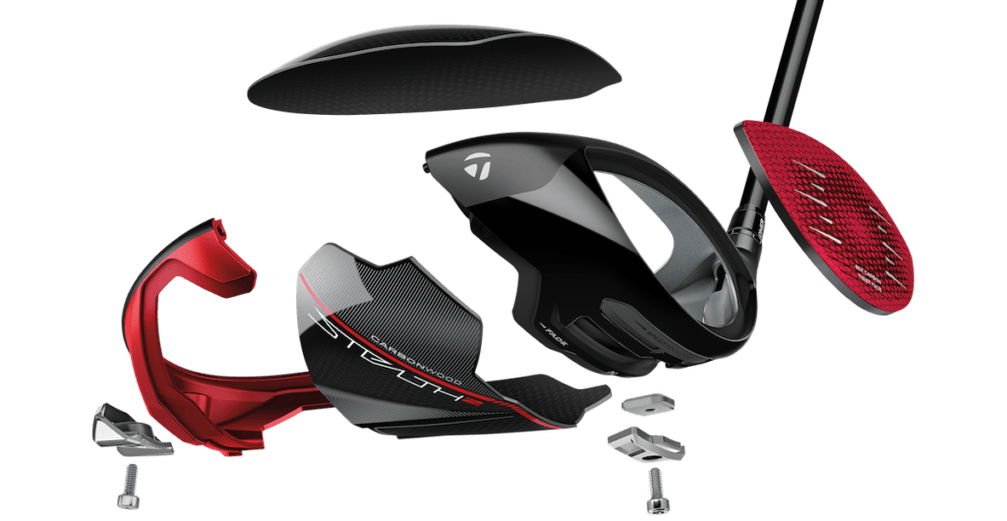 More Carbon, what does more Carbon mean?
Stealth 2 is the first driver in TaylorMade’s history that has more carbon (including composites) than any other material by volume. TaylorMade has gradually increased the usage of carbon over the last five years and when compared to first generation Stealth, there is a 75 percent increase in carbon in Stealth 2 Plus and nearly double in Stealth 2 and Stealth 2 HD.

More Carbon creates more discretionary mass that can be re-located for a higher Moment of Inertia (MOI) and optimal CG location. The additional carbon has enabled our engineers to increase total MOI in the Stealth 2 Plus driver by nine percent from last year’s Stealth Plus.

Carbon is seen in Stealth 2 drivers with a: Carbon Crown, Carbon Reinforced Composite Ring, Carbon Sole and the 60X Carbon Twist Face. The only parts made of metal in Stealth 2 clubheads are the titanium collar on the front of the club that holds the hosel and frames the face, and front and rear weights that vary by model.

“The modular carbon body construction of Stealth 2 represents our commitment to carbon as the leading material in every TaylorMade driver we produce. It was clear that the breakthroughs we had with Stealth were just the beginning in terms of the performance we can extract from this technology platform. A primarily carbon-based head construction is revolutionising where we are able to position mass in a driver and this allows us to finely tune the launch, spin and MOI in each of the three Stealth 2 driver models,”
added Tomo Bystedt.

Familiar Tech Remains
Stealth 2 maintains various technological innovations that made the original Stealth driver.
The 60X Carbon Twist Face is encased by a polyurethane nanotexture cover that is used to fine tune launch and spin to optimise total distance regardless of playing conditions.

With Stealth 2 TaylorMade have also worked on acoustics in order to produce a sound and feel that TaylorMade drivers are known for. Engineers used a combination of carbon panel curvature, shape, and thickness to finely tune acoustics, delivering a sound profile that is both bright and powerful.

There are three Stealth 2 heads, each with different performance benefits to suit any player. 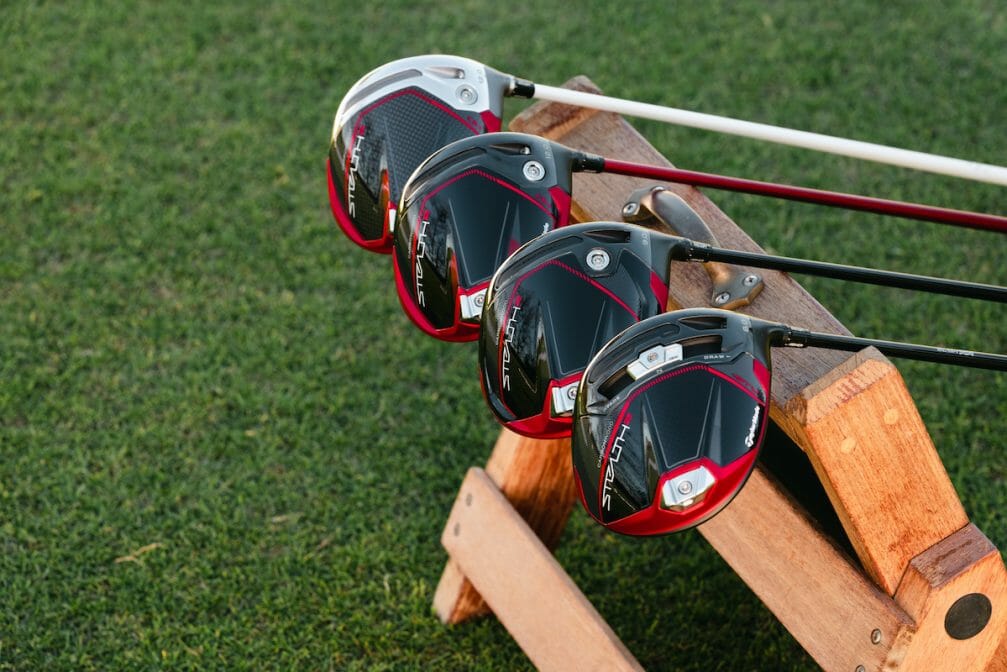 STEALTH 2 Plus (€669)
Because of weight savings from the usage of carbon materials, engineers were able to incorporate the use of a 15g sliding weight track designed to help golfers dial in shot shape by shifting mass on the sole to create the desired ball flight. Stealth 2 Plus is the lowest spinning driver in the family. Stealth 2 Plus will be offered in 8°, 9° and 10.5° lofts. Shaft offerings include Mitsubishi Kai’li Red 60 (X, S, R) and Project X HZRDUS Black (Gen 4) 60 (X/6.5, S/6.0). Stealth 2 Plus comes stock with Golf Pride’s Z-Grip Plus 2 Black/Red (52g).

STEALTH 2 (€649)
The reconstructed Stealth 2 driver delivers high MOI performance with a heavy 25g tungsten weight positioned on the Inertia Generator. The TSS (TaylorMade Swingweight System) weight is strategically located on the sole to encourage optimal launch and spin properties, delivering complete performance while allowing the driver to be tuned for
Swing weight in custom. The carbon ring on Stealth 2 and Stealth 2 HD stands out, as it is completely red and visible at address unlike Stealth 2 Plus.

STEALTH 2 HD (€649)
Engineers utilised weight savings from the full-body carbon construction to shift the Inertia Generator with its heavy 30g weight closer to the heel in Stealth 2 HD, creating high launch and draw-bias with extreme MOI. Stealth 2 HD is the most stable and forgiving driver in the family. Both the Stealth 2 and HD will be offered in 9°, 10.5° and 12° lofts. Stealth 2 shaft offerings included Fujikura Ventus Red TR 5 (S, R, A) and Mitsubishi Diamana S+ 60 (X, S, R). The Stealth 2 HD shaft offering is Fujikura Speeder NX Red 60 (S) and 50 (R, A). Both models come with Golf Pride’s Z-Grip Plus 2 Black/Red (52g) grip.

For all offerings, numerous custom shaft and grip options are available through TaylorMade’s Custom department. The custom process allows TaylorMade to build the ideal club for any golfer – it’s not women’s equipment or men’s equipment, but the right equipment.

If red is not to your fancy, TaylorMade continues its investment in personalisation with the MyStealth 2 programme to allow golfers to have advanced personalisation in the Stealth 2 Plus Model:

MyStealth 2 has an RRP of €759 and is offered in the Stealth 2 Plus model in 9° and 10.5° loft in both RH and LH. Preorder begins January 10 at TaylorMadeGolf.com and available at select retailers starting February 17.