Maguire on U.S. Women’s Open start: “Today is a big step forward for me” 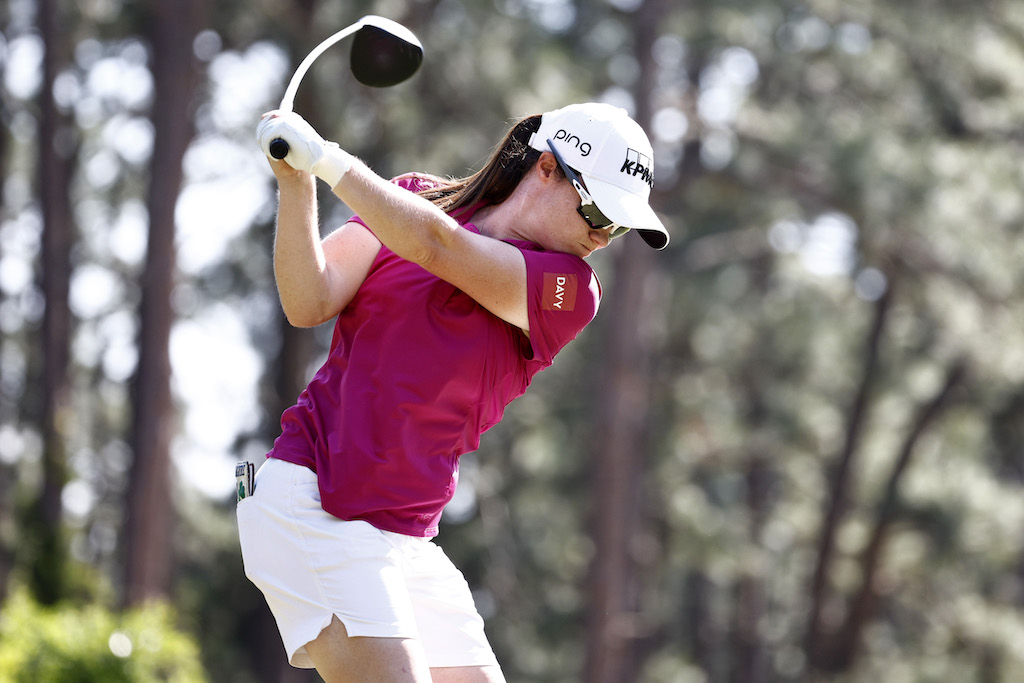 Leona Maguire signed for her first under-par round in a U.S. Women’s Open and admits that her opening effort in North Carolina is a big step forward for the Cavan star.

Beginning her round on the ninth hole, Maguire opened with an eighteen footer for birdie and traded a bogey on 14 with a birdie at 16 and parred 17 and 18 to play her first 10 holes in one-under at Pine Needles Lodge.

Maguire bogeyed the second, her 12th, before picking up birdies at the par-fours sixth and eighth either side of another bogey on 7, reaching the clubhouse in red figures after a one-under 70 and, although she trails leader Mina Harigae by six shots after the opening round’s action, she has momentum on her side.

“It’s the biggest event on the calendar. Obviously this year with the massive purse increase everybody wanted to be here and everybody wants to be here for the weekend,” said Maguire who hit 13 of 14 fairways.

“I’ve never shot I don’t think even par or under par in any U.S. Open, so today is a big step forward for me and obviously nice to be back in North Carolina again. There’s a few Duke people supporting me today and a few Irish people, so yeah, it’s nice to be back.”

US Solheim Cup star Harigae had a fantastic round as nine birdies and two bogeys has her one clear at the top as she tied the second-lowest round in U.S. Women’s Open history with a 64, with this her first round in the 60s at this tournament in 37 attempts.

And yet she wasn’t even the main story at the end of the day, that honour instead going to her nearest challenger, Swedish amateur Ingrid Lindblad, who opened with six birdies and one bogey in a tidy six-under 65 to steal all the headlines.

The 22-year-old, playing alongside role model Annika Sorenstam, carded the lowest round by an amateur in U.S. Women’s Open history and led the tournament for most of the day until Harigae eclipsed her later.

“I hit a few close to the pin and my putting was great,” said Lindblad, who beat the previous record of 66 in just her fourth Major start.
“It just worked from the fairway to the green. It’s a great US Open course.”

That is the kind of standard Maguire is having to live up to, but she gave herself a chance with her strong finish to claim a share of 18th going into day two and she will be encouraged by a round where she didn’t have her best stuff but still finished under-par.

The putter got hot on her way back to the clubhouse and she would finish in style, the flat iron helping her to birdies at the sixth and eighth, either side of that bogey on the par-four seventh, and Maguire insists such patience will prove key to her chances over a hopeful weekend.

“Yeah, I think it’s a course you have to stay really patient on, obviously going to have to take your chances where they come, and feel like I did a really good job of hitting a lot of middles of greens, and it was nice to hole that long one on 6 and hit one close on 8 to finish. Some good momentum heading into tomorrow,” she said.

It was also a good day for Stephanie Meadow as, even though the Galgorm touring professional finished one-over-par and in a tie for 47th, it was a round that threatened to be much worse after two early bogeys.

A birdie at the par-four 12th, her fourth, got her back on track, although a bogey before the turn at the par-four 17th cancelled that out, but it didn’t take her long into Meadow’s back nine to rectify that with a birdie on the par-five first.

Eyeing up getting back to level-par, Meadow would have to settle for one-over as a birdie at the par-four sixth immediately followed a bogey at the par-three fifth, but the Jordanstown woman is happy to have mitigated most of the early damage her slow start caused.

“I just played pretty solid golf,” Meadow said. “It’s tricky and it’s tough, especially when you get over par and you’re trying to fight back. You kind of go the other way because you’re trying to make — you kind of make unforced errors, so just one of those golf courses.”

“[It would] be nice to get a good start,” she said of her hopes for Friday’s second round. “Obviously, I mean, I didn’t being look at the leaderboards out there today. I was kind of shocked that it was tied 40 something 1-over, so it’s playing tough and the wind was a little tricky.

“Be nice to get out in the morning and start on the easier side and hopefully I can get something rolling.”

Harigae is the woman to catch, though, after five birdies on her front nine, followed by four more in a stretch of five holes on the back nine as she set the early pace, while it will be interesting to see how Lindblad copes with the spotlight on day two at the top of a Major leaderboard.

Behind them, defending Evian champion Minjee Lee is tied with another Swede, Anna Nordqvist, and Ryann O’Toole for third after all three shot four-under 67s, with Ally Ewing and Lexi Thompson a shot further back after a pair of 68s.