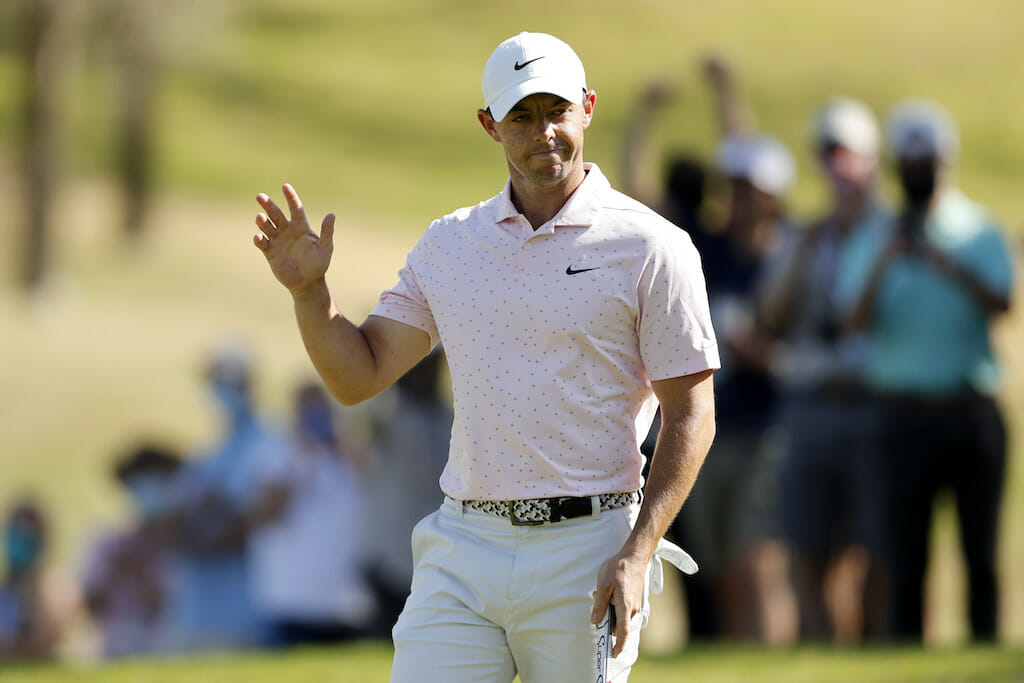 Rory McIlroy’s now got just 12 days to find winning form before teeing-up in the year’s first major at Augusta National.

McIlroy was jetting home to Florida after scrambling his way to a half in his match against Aussie Cam Smith on day three of the WGC-Dell Match-Play Championship in Austin, Texas. It was all too late with both McIlroy and Smith bundled out after Ian Poulter made it three wins from three matches in their group match in defeating American Lanto Griffin 2 & 1.

Smith, sporting a now wilder-looking ‘Mullet’ hair style, virtually had McIlroy on a victory hook for all but the last hole. He went 2-up after four holes before McIlroy got back to just 1-down with a par on the eighth but the two-time Tour winner got back to 2-up with a birdie on 10 before McIlroy was just 1-down when he sensationally holed a near 60-footer for an eagle ‘2’ at the par-4 13th.

McIlroy finally got back to all-square when Smith conceded 16 but sadly McIlroy’s tee shot at the par-3 17th rolled off the fairway and into a lateral hazard.

“Once again we see Rory’s problem and that’s taking speed out of his golf swing and not putting it in,” said SKY Sports Paul McGinley. Smith went back to 1-up only for McIlroy to hole a 31-footer at the 18th for the half.

Shane Lowry grabbed his first win of the event, racing to 4-up after six holes over Columbian Sebastian Munoz and while just 1-up after 12 holes, the Clara golfer parred the 16th for a 3&2 win. Lowry also joins McIlroy sitting out this week’s Valero Texas Open before heading to Augusta.

While Sergio Garcia perhaps enjoyed the shot of the day, arrowing a stunning approach to the par-3 4th before watch his ball pitch over the flag and reverse in for a hole-in-one and a walk-off victory over Lee Westwood in their playoff decider.

HOLE-IN-ONE TO WIN THE MATCH!!!

“I really don’t know what to say,” Garcia reflected. “Obviously, yeah, a hole-in-one is amazing. Lucky No. 13 for me. But you know, the two putts I made on 2 and 3, massive, to keep myself going. And then obviously the shot on 4, it’s a great shot, but then you get lucky that first of all it doesn’t hit the flag because it must have been very close to hitting the flag, and then it rolls back in.

“Obviously very happy about that. I’m sorry for Lee because I did a couple stupid things to him this week, the first day and today, but unfortunately one of us had to lose.”