Kearney kicks into gear with moving day 67 in Andalucia 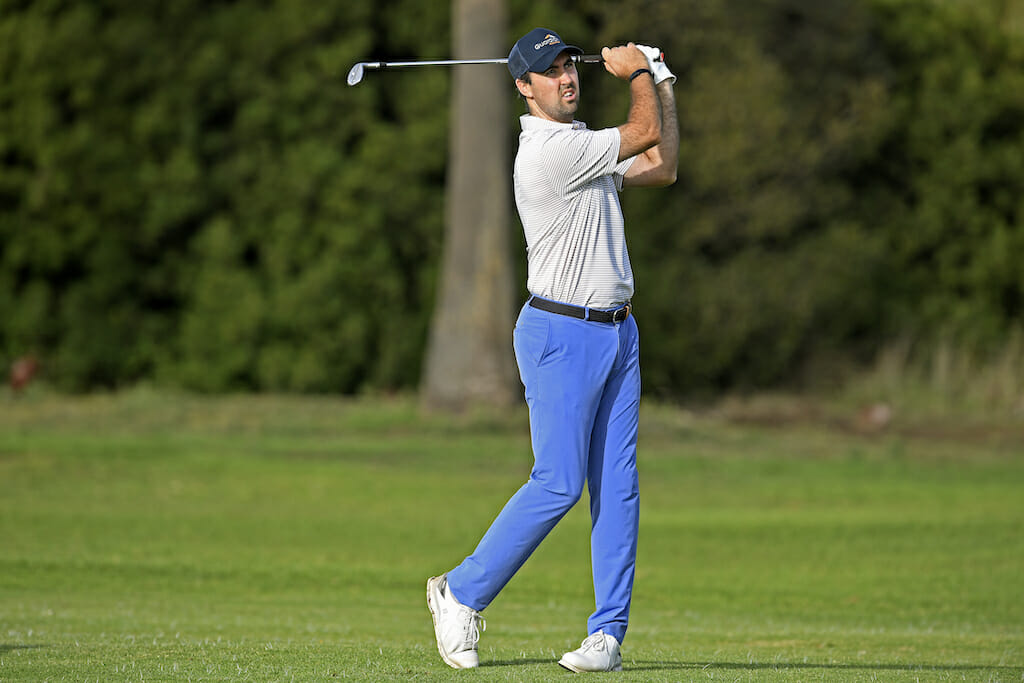 Niall Kearney produced a timely reminder of his talents to move to within four of the lead after carding a five-under par round of 67 on day three of the Andalucía Challenge de España.

The Royal Dublin professional started the day at three-over par after rounds of 72 and 75 meant he made a relatively no fuss account of himself over the opening two days but that all changed on Saturday with a superb run of scoring after a slow opening to his third round.

A bogey at the first was followed by four pars but a birdie on 6 soon had the floodgates open as Kearney added another at the seventh before turning the after-burners on around the turn. A gain on 11 was followed by three straight birdies from 13 and with three more pars to finish, Kearney was home and hosed in 67, leaping 29 places up the leaderboard into a tie for 15th at two-under par.

The news wasn’t quite so good for Michael Hoey who, after carding an eagle 3 at the second, could only manage a one-over par round of 73 that saw him fall to a share of 53rd at plus-four.

At the top, Pedro Oriol will draw on the spirit of Seve Ballesteros as he goes into the final round tied for the lead on six-under par with Sweden’s Oscar Lengden at Iberostar Real Club de Golf Novo Sancti Petri. The Spaniard posted a four under par round of 68 on day three in Andalucía while Lengden posted a 69 and the duo lead England’s Richard Mansell, overnight leader Martin Simonsen, Ondrej Lieser, of the Czech Republic, and Switzerland’s Raphael de Sousa by one stroke, as they all share third place on five-under par.

Oriol last tasted victory on the European Challenge Tour at the Rolex Trophy in 2017 when he wore a visor belonging to five-time Major Champion Ballesteros and although he does not have the piece of headwear with him this week, he will use the legendary Spaniard as inspiration at a course which he designed.

“It would be an extra point, winning in Spain,” he said. “Also, every time I play, I play with Seve on my mind. It’s very special. This golf course was made by Seve. I remember winning Rolex Trophy with his visor and also when I won the Gold Medal with Scott Fernandez in 2018, we were talking all the time about Seve all the time because we were in a Ryder Cup venue at Gleneagles so hopefully tomorrow I can think about Seve, his heart and fight as much as possible, as he did.”

The 16th, 17th and 18th holes are playing as the second, first and sixth hardest holes, respectively, this week and the 34-year-old believes it could all come down to that trio to determine a winner tomorrow.

“At the end of 2018, I got injured, I broke my knee and it’s been a pretty tough fight to be here again. I’m happy to be in this situation again, I’ve missed it, and I’m going to try and enjoy it as much as possible tomorrow, and obviously try to win.”

Lengden will look to add a third Challenge Tour crown to his collection when he tees it up in the final group tomorrow having previously won the Bridgestone Challenge in 2017 and the 2018 edition of the Challenge de España, held at Izki Golf.

“It’s always tough to finish poorly but with my overall game and the feelings out there, I feel pretty good,” he said. It would mean a lot. I know that a win means a lot to everybody but it means a lot to me to win out here. I’ve obviously done this before, I’ve won twice, so I’ll keep telling myself that. Hopefully I’ll be a bit nervous, which I like. I like embracing that position, so it’s going to be a lovely day.”