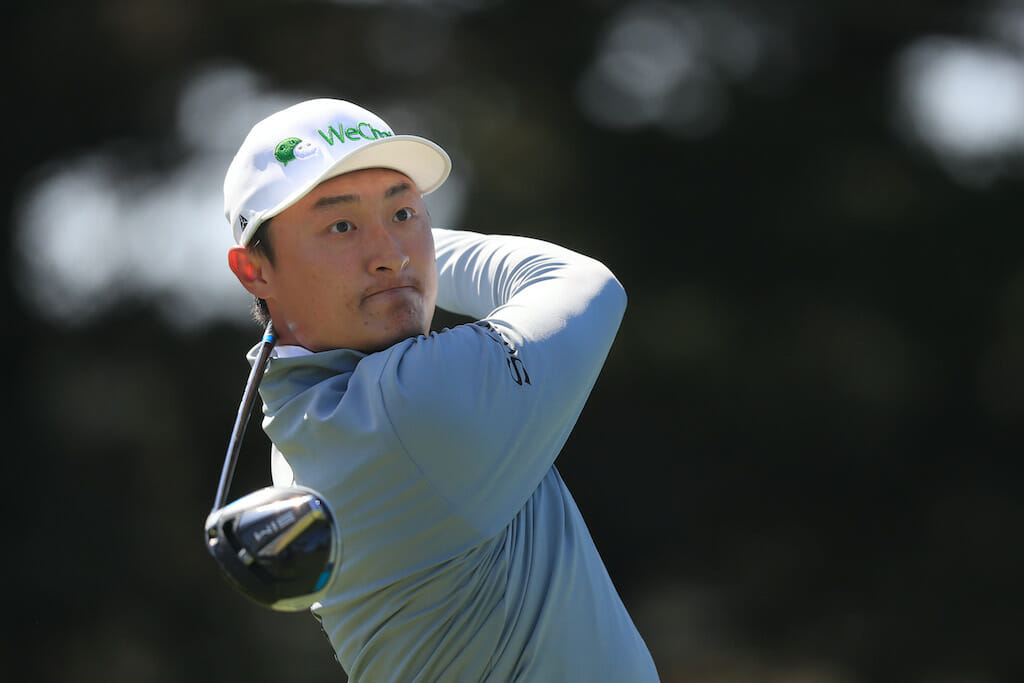 China’s Haotong Li was singing the praise of Ireland-born former coach, Paul McLoughlin in grabbing the halfway lead in adding a 65 to his opening 67 for a two shot cushion at eight-under par.

Li has become the first Chinese-born player in history to be leading a major championship after two rounds as he now seeks to also become a first-born Chinese winner at the game’s highest level.

The 25-year old has six pro wins in his career with a best result in brilliantly coming from behind to deny Rory McIlroy in a play-off for the 2018 Omega Dubai Desert Classic title.

“The last couple days I’ve been pretty much all hit in the right spot,” he said.

“Even if I miss the green, I still got a chance to up-and-down, and also got a lot — good lie in the rough.”

Li is no stranger to going low in a major having shot a final round 63 to grab third place behind Jordan Spieth at Royal Birkdale in 2017.

“That was a long time ago,” he said with an all too familiar laugh.

“Yeah, definitely good to have that experience in my mind, and definitely will help to play the next two rounds.”

Li grew-up in Shanghai and his golf skills came under the influence of Dublin-born PGA professional Paul McLoughlin who at the time was Director of Golf at the prestigious Lake Malaren club outside the Chinese financial capital.

And no doubt under McLoughlin’s guidance, Li turned pro in 2011 at the very tender age of just 16 years.

“Paul helped me a lot, especially when I first turned pro, the first couple years, so I am very grateful to him,” said Li.

“He taught me so much about the game and it was the confidence he gave me that saw me make the decision to turn pro.”

McLoughlin also worked in Poland and the U.S. He returned home a few years back to set-up TMG – The McLoughlin Group.

“That was a long time ago,” he said with an all too familiar laugh.

“Yeah, definitely good to have that experience in my mind, and definitely will help to play the next two rounds.”

And while Li has shown he can go low, the Chinese golfer is best known for a famous incident during the 2017 French Open in Versailles.

Li hurled his putter into the water surrounding the 11th green after three-putting during the first round. About 20 minutes later, the then 21-year-old’s mother was pictured wading knee-deep into the water to recover the club that could be seen partially sticking out of the water.

However, she had the likes Tyrrell Hatton, Thomas Pieters, and Alex Noren, who were playing the 11th at the time, in stitches when mum took the plunge and came back up holding just one half of the broken club.

Unsurprisingly, there’s plenty of talent in the chasing back this week too with England’s Tommy Fleetwood and Justin Rose, Australian Jason Day and three-peat chaser Brooks Koepka amongst those on his tail at six-under par.

Former Irish Open winner Paul Casey shot a 67 to be in fifth place tied in the clubhouse with the in-form Brendon Todd (70).

Casey, 35, captured his then 12th of 14 European Tour wins with victory by three shots in the 2013 Irish Open at Carton House.

“I played really well. I mean, glorious day for golf,” he said.

“It’s weird, the first three days of practice that I saw here at Harding Park were — presented an incredibly difficult test of golf, and then the last two days have been quite generous actually which is nice as a player.

“It’s not quite as intimidating when you step on that tee. Joy to be out there playing with Webb Simpson and Ian Poulter, and we had a blast. We cruised around, I played some wonderful golf, and very, very happy with what I shot.

“I didn’t spend too much time looking at — 8 or something is leading, something like that, but knowing that as I did yesterday there’s always a disaster here if you’re not paying attention, I just tried to keep a clean card, and the right side of the pin, which is what I did for most of the day.”

Casey is contesting his 18th PGA Championship since a debut in 2002 and with best finish a T10th in 2016 at Baltusrol in New Jersey.

Rory McIlroy heads the chasing pack from an Irish perspective after adding a 69 to his opening 70 to reach one-under par. Any McIlroy momentum was halted by a disastrous triple-bogey seven at the 12th when the Holywood star had manage to get to three-under par.

Shane Lowry is a shot further back at even after a frustrating two-over par 72. Lowry was another cruising along nicely at four-under for the tournament before five bogeys in six holes from his eight. He trails Li atop the board at eight-under par.

Graeme McDowell missed the cut by five strokes after rounds of 72 and 74 left him at plus-six.