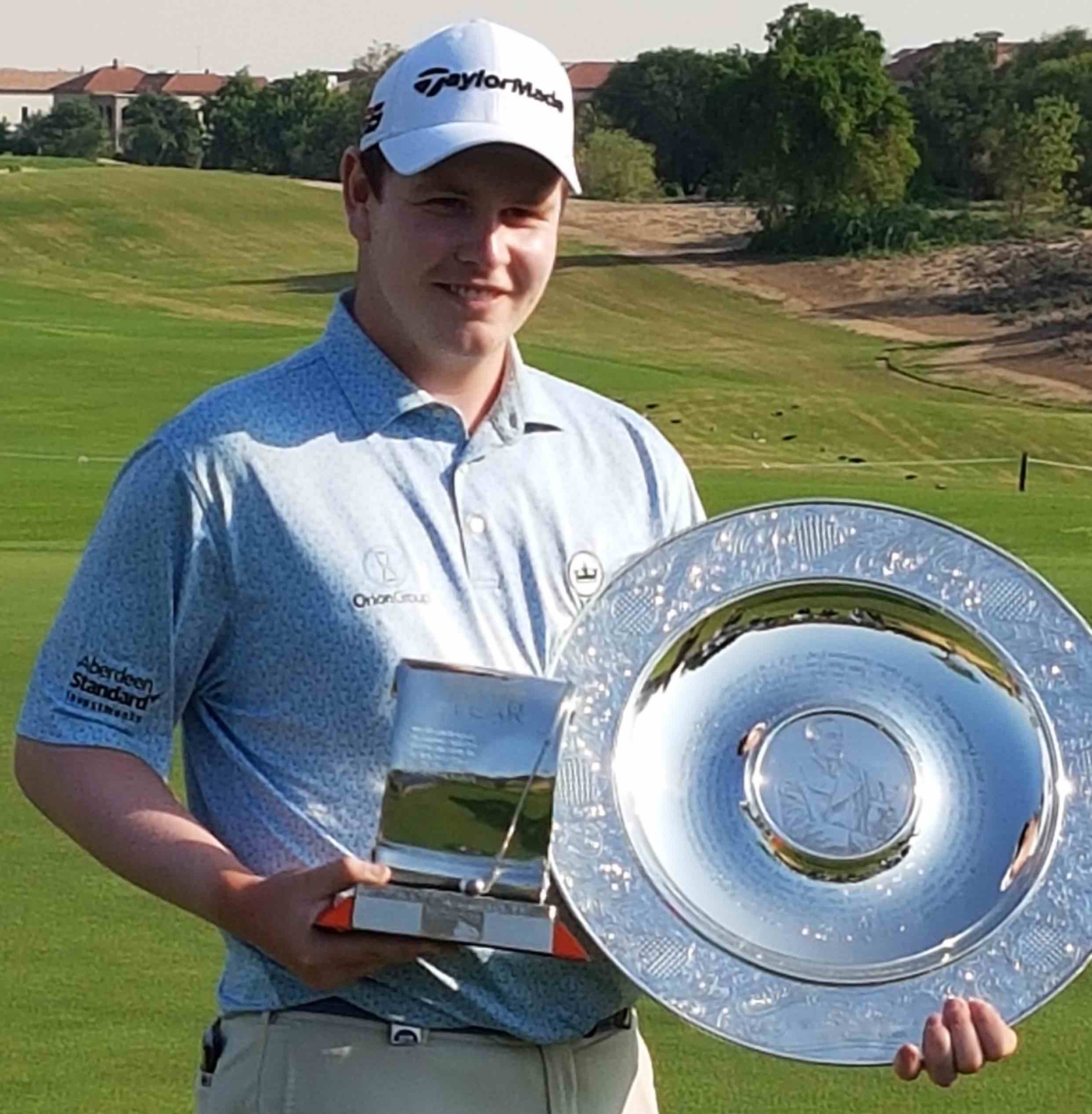 A pair of former Irish Open winners along with an Irish-born caddy have sung the praises of a rookie Scot.
Victorious Ryder Cup captain, Thomas Bjorn and Masters winning hero, Sergio Garcia are not only winners of the Irish Open but they are former European Tour ‘Rookies of the Year’, are they’re singing the praise of top world-ranked Scot Robert MacIntyre.
Also delighted for the young Scot is his 24-year old caddy, Greg Milne who proudly hails from Waterford.

MacIntyre triumphantly arrived back home earlier this week to Oban, accompanied by his proud parents Carol and Dougie along with two new trophies he’ll at least get to keep for 12 months.

Not only did MacIntyre become the 12th Scot in near 60-years to win the Sir Henry Cotton award but he went home with the Challenge Tour graduate trophy as the leading money-earner having played last year on the secondary tour.

For MacIntyre, it’s been a very popular double-award celebration with the ‘Rookie of the Year’ vote recently taken out of the long-time hands of a voting committee of three, to a clear-cut highest-ranked Race to Dubai player.

As such, the 23-year old Scot was a clear and decisive winner ending his maiden season  11th on the Race to Dubai and three spots higher than nearest rival, American Kurt Kitayama.

Bjorn, who led Europe to an emphatic seven-point success last September in France, made his Tour debut in 1996 with his European Masters victory that year, helping earn the then 25-year old Dane the ‘Rookie of the Year’ award.

And now having teed-up in 544 Tour events, including victory also in the 1996 Irish Open triumph at Carton House, Bjorn reckons he knows talent when he sees it.

“It’s been very hard not to be impressed with what Robert has achieved this year in his first full season on the Tour,” said Bjorn.

“Robert has just played so well that every senior player who would have played against him this year would have noted that air of experience about him and with that player walking from the course saying to themselves; ‘This is one player to watch’.

“It takes a lot for these particular older player to say that, but then that just shows there is some strength in Bob and there has been so many players taking note of what he has been achieving this year, and that’s just remarkable.

“I’ve watched him myself and there is something special about him and for him to win the ‘Rookie of the Year’ award is a remarkable year-long performance.

“It was a great to see Bob and Kurt (Kitayama) going at it over the last few events of the year, and also for the first two rounds in Dubai, and we saw each sort of going at each other’s jugular.

“I look back to when I had that ‘thing’ between myself and Padraig (Harrington) as we seemed to be going after each other every season.

Sergio Garcia who won twice in his maiden 1999 season, first in brilliantly shooting a final round 64 to win the Irish Open, and three months later he was being hailed as the next ‘Seve’ in defeating now fellow Major winners Ian Woosnam and Padraig Harrington in a play-off at the German Masters also gave a glowing report.

The Spaniard said:  “Being ‘Rookie of the Year’ is something you will always treasure and it shows how good a start you had to your career.

“Everyone out here knows how tricky and difficult it can be in a first year out here on whether it is the European Tour, the PGA Tour, the Asian Tour or any sport you play.

“So, for Robert to be named ‘Rookie of the Year’ is something he can be very proud of and so he should be.

“He’s played amazingly all year and he’s been very, very steady and consistent all year.

“It was 20-years ago when I was in Robert’s position and I can recall how proud I was and how much I loved winning the ‘Rookie of the Year’.  It was just amazing for me, with the only disappointment in that I did not win the PGA Tour ‘Rookie of the Year’ also as Carlos Franco had an amazing rookie year in the States, so I was a close second.

“The thing is also you can only have one shot at winning ‘Rookie of the Year’.  It’s a one go, one attempt only and there are not many players out here who can say they have achieved that in their career.

“As well, you could have had a good amateur career but once you turn pro and take that big step you don’t know how well you are going to perform, so there’s that huge uncertainty as you are virtually starting from scratch.

“So, to win the ‘Rookie of the Year’ in your first year is really amazing.  That is how I felt back in 1999 and I know Robert will now be thinking the same as I did.”

And then there’s the one person closest to MacIntyre, his caddy Milne, who MacIntyre has spoken of often this past season as his biggest calming influence inside the ropes.

“Ours is more than just a player-caddy relationship as we are more than that as we are good mates,” said Milne

“Nothing kind of gets in our way out on the course as we have a good laugh but over a shot it is serious.

“At the start of the year, it was all about keeping his card but his result at the British Masters changed all that, and then it all just changed qualifying for The Open and getting into the Final Series on the Race to Dubai.

“It’s just been a great year and it’s going to be hard tying to top what he’s achieved next year.

“The great thing though is he’s got his name on the Rookie of the Year trophy and you only get the one opportunity to do that.

“The way he has played this year has been nothing short of remarkable and he’s impressed me more this year than ever before.  He’s also such a very mature head on such young shoulders.

“The great thing too is his name is now there on that trophy with some of the greats of Scottish golf like Monty, Sandy and Bernard Gallacher.

“Robert’s been a joy to caddy and I am thrilled for him.”