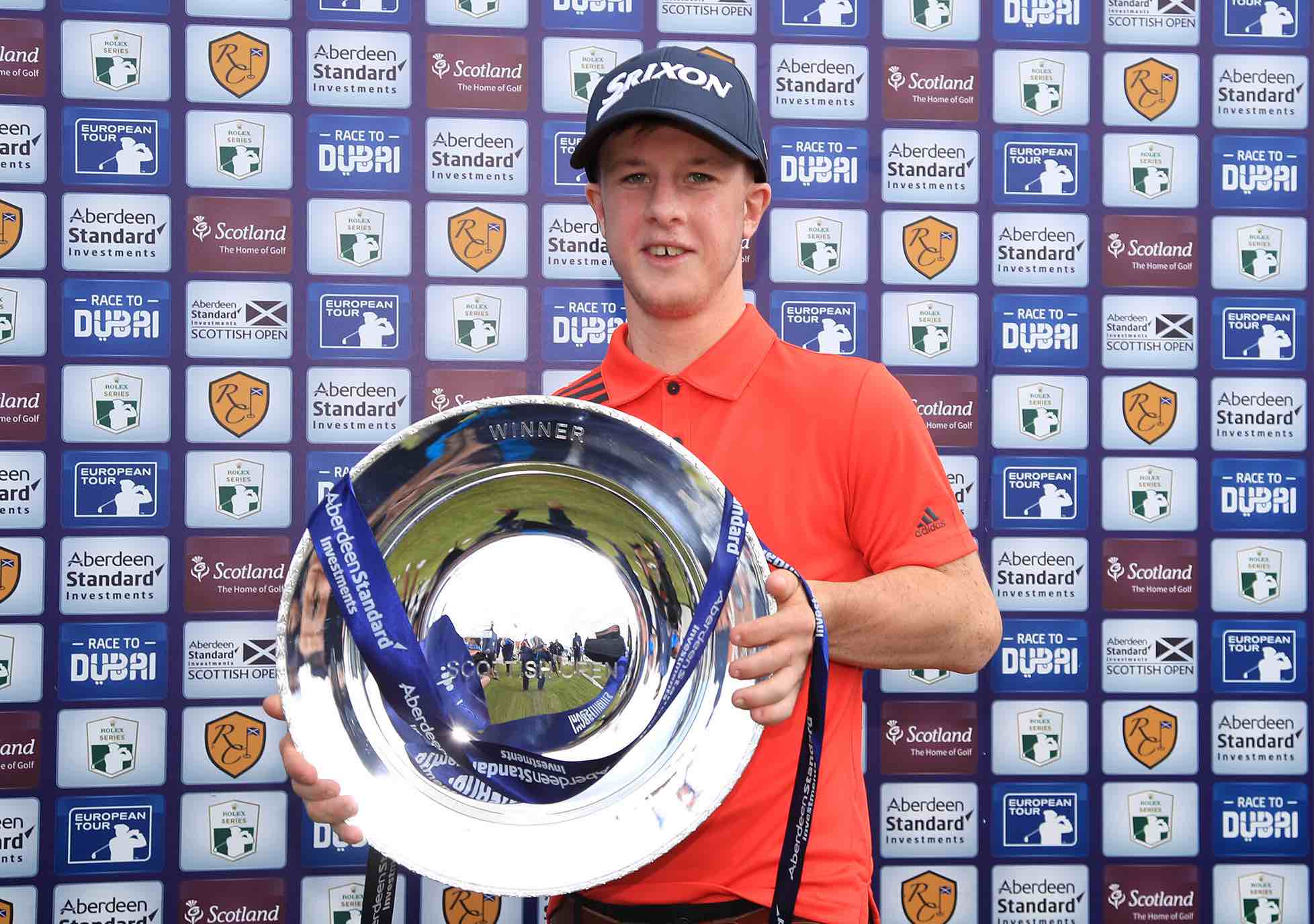 Dundalk’s Brendan Lawlor after winning the EDGA Scottish Open at The Renaissance Club in Scotland in July. (Photo: Getty Images)

Brendan Lawlor is busy blazing a trail for disability golf with eye-catching results around the world and now the Dundalk sensation will tee it up in the ISPS Handa World Invitational Men | Women, presented by Modest! Golf at Galgorm Spa & Golf Resort.

The 22-year-old is the latest elite amateur to confirm his place in the first of its kind event in Europe where men and women will compete at the same venues at the same time with the professionals sharing equal prize money.

Lawlor has been in sensational form of late and recently won the inaugural EDGA Scottish Open after carding a final round 71 to win over the same Renaissance course professionals played the week before The Open at Royal Portrush.

“It’s been a great year which has really taken off in recent weeks,” enthused Lawlor, who is currently ranked fourth in the World Rankings for Golfers with Disability (WR4GD)

“Crazy but enjoyable, that’s how I would describe the run we are on at the moment. Winning in Scotland is definitely my biggest achievement to date. There is a big focus on disability golf and it’s great to see we are getting plenty of coverage around the world on Sky Sports and through social media.”

The EDGA Scottish Open was the first of two disability championships alongside Rolex Series events on the European Tour’s 2019 Race to Dubai schedule. Lawlor’s win means he qualifies for the EDGA Dubai Finale as part of the DP World Tour Championship at Jumeirah Golf Estates in November.

For now, Lawlor is focused on Galgorm and Massereene after receiving an invite through Niall Horan and Modest! Golf. He will also become an Official Ambassador for the tournament.

“I am very grateful to Niall and Mark (McDonnell) at Modest! Golf who invited me to play. It’s a great opportunity and will be a fun week, especially with my dad on the bag,” added the scratch golfer, who is a member of Dundalk Golf Club.

“I believe this will the first time a disability golfer will compete on the same stage over the same course as the professionals in a Challenge Tour event. That should generate a good bit of interest.

“It will be interesting to see how I play against the professionals. It will be a fun week for me. No pressure, just go out and enjoy it and it’s a great opportunity to showcase disability golf and how good it is.”

McDonnell, Modest! Golf Director, said: “We are delighted to have Brendan playing in this great event. Brendan has been shooting great scores for a long time, not least for his most recent win in Scotland. He has earned his place at Galgorm by continuing to compete at an elite amateur level.”

“Like ISPS Handa, we believe in the ‘Power of Sport’ and what Brendan is doing for disability golf epitomises that ethos. He is an inspirational character.”

Lawlor was born with Ellis van-Creveld Syndrome, a rare bone growth disorder that leads to shorter limbs. For years he competed at the top level of able-bodied golf. He has played alongside Irish international Caolan Rafferty for Dundalk in the Senior Cup and Barton Shield and this year was part of the club’s Barton Shield team that won the Leinster title and qualified for the GUI All-Ireland Cup & Shields finals.

Lawlor believes there is massive momentum for disability golf just now and is happy to play his part. “I know the tour and Keith Pelley are talking about a World Tour by 2021. There are lots of great things starting to happen. Inclusion is everything and it’s fantastic to be accepted.

“For so many professional golfers to see what we’re doing and accept that we can play with them, it’s fantastic. They can see our talent and that’s helping too,” said Lawlor after his Scottish win. He met Open Champion Shane Lowry, Paul Dunne, Ian Poulter and others when competing at the World Cup of Golf in Melbourne last year.

“I also met Dr Handa (ISPS Handa) in Melbourne. He was so interested in what we were doing. So many people took a genuine interest.”

Lawlor will be one of 22 elite amateurs set to compete in the ISPS Handa World Invitational Men | Women, presented by Modest! Golf. The event takes place from August 15-18 at Galgorm Castle and Massereene Golf Club.