Rory McIlroy’s hoping a return visit to the nearby Magic Kingdom at Disney World will deliver him an equally magical career first in successfully defending his Arnold Palmer Invitational title at Bay Hill.

McIlroy brilliantly birdied three of his closing four holes in a sizzling third round six-under par 66 and is just one shot behind England’s Matthew Fitzpatrick who posted a bogey-free 67 to move to 9-under par, as the 24-year Sheffield star seeks to win for a first time on the PGA Tour.

McIlroy is second on eight-under with three players – Aussie Aaron Baddeley (69), England’s Matthew Wallace (69) and American Kevin Kisner (70) locked in third place at six-under par in the $US 9.5m event in suburban Orlando.

McIlroy has won 24 tournaments around the globe since turning pro in late 2007 but not once has he managed to successfully defend a title.

That could all change on Sunday afternoon with memories strong of McIlroy birdieng five of his closing six holes a year ago in a dominating last day 64 when winning the Arnold Palmer for a first occasion.

“My wife Erica told me last year the only reason I won this event is because we went to the Magic Kingdom on Friday,” said McIlroy of the key to Saturday’s round.

“So, I thought, let’s go back to Disney World and have a good time again. And it’s nice to do it every once in a while.

“The best ride was the Tower of Terror and I think if you don’t, if you come to Orlando and you don’t go to the theme parks, you’re sort of missing out on something. 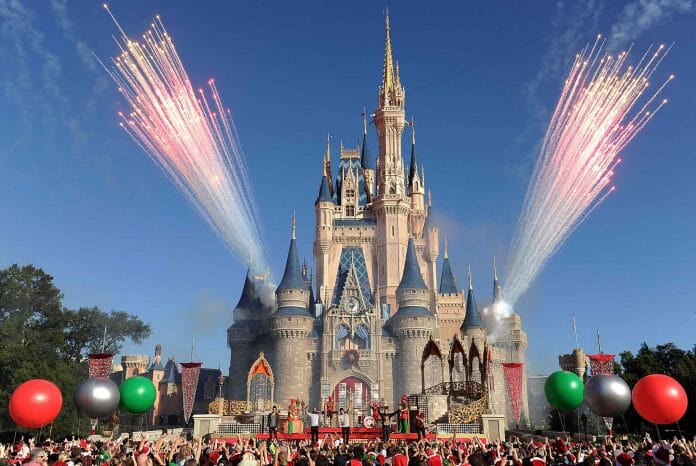 “I’ve never successfully defended a title so it’s a great opportunity tomorrow to do something I’ve never done before and it’s going to be exciting.

“It’s just a matter of doing the right things and doing them day-after-day and I can do all those maybe tomorrow is the day.”

However, McIlroy will not want to know that Fitzpatrick has won his five European Tour titles, including the past two European Masters wins, while leading going into the final day.

And helping Fitzpatrick to end a 45-event victory drought on the PGA Tour is prolific-winning caddy, Billy Foster and former caddy to the likes of Seve Ballesteros, Lee Westwood and Darren Clarke.

“Billy’s got so much experience and it’s a big help to have him on the bag,” said Fitzpatrick.

“He’s done it, he knows all the different scenarios that could possibly happen, and he probably has learned all about all of them and it’s been great to be able to draw on his enormous experience.”

McIlroy headed into the third round of the $9.5m event seven shots adrift of victorious Ryder Cup team-mate, Tommy Fleetwood.

He quickly brushed aside Friday’s frustrating round of 70 to birdie four of his opening six holes on day three thanks to birdie putts of six-feet at the second and then 11-feet at the next, the par-4 third.

McIlroy then made amends for bogeying the par-4 fifth hole on both day one and two when he rolled-in a 26-footer ahead of playing a superb 154-foot greenside bunker shot at sixth to just 12-inches for a fourth birdie of his day.

Then for a second day running, McIlroy dropped a shot at the par-4 eighth hole after finding a back bunker.

McIlroy then produced five straight pars before the shot of his round, a laser-like 160-yard second shot to just six inches at the par-4 15th moved him to four-under and T2nd with seven others at six-under par.

There was now no stopping McIlroy, turning-up the wick to birdie the par-5 16th and then after a par at 17, he had the fans standing to applaud when he ended his round by holing a six-footer for the seventh birdie on the day.

McIlroy proudly headed to the clubhouse leading at eight-under par before Fitzpatrick later in the day moved to nine-under.

Graeme McDowell jumped 25 places to a T17 place with a much-improved 69 to get back to four-under after a horror second round 75.

McDowell could manage just one birdie in Friday’s effort but he turned that around with four birdies and just the one dropped shot on day three.

G Mac got things rolling in the right direction in holing an 11-footer at the par-5 fourth hole ahead of the only bogey when he three-putted the par-3 seventh hole.

McDowell bounced straight back after landing his second shot into the par-4 eighth hole on the back fringe, breaking out in a big smile when his 16-footer birdie putt disappeared into the hole.

Then, for a first time this week, McDowell birdied the par-5 12th hole but only after he sent his 230-yard second shot some 40-yards past the hole before he brilliantly chipped to three-and-a-half feet for a third birdie of his day.

McDowell came to the final par-5 at the 16th and landed his second shot to some 20-feet from the flagstick and two-putted for birdie before a par at the last and his 69.

And while McDowell was well in place on day one to secure one of the three invitations into July’s Open Championship, he is going to need to go ultra-low on day four to be heading to Royal Portrush.

Indeed, as McDowell relaxed over lunch there was as many as 10 others ahead of him on the Bay Hill leaderboard who are also not yet exempt into golf’s oldest major.