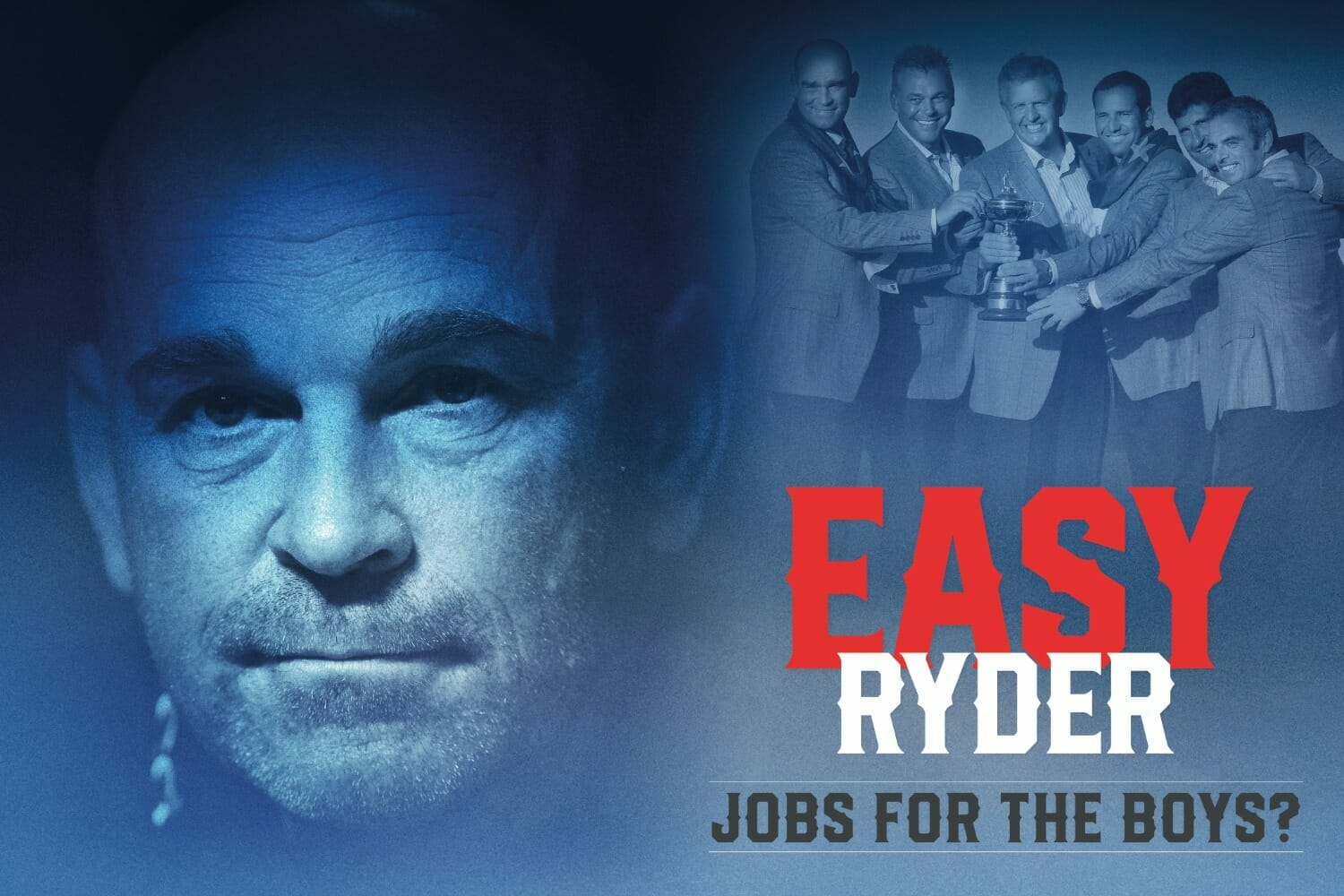 Whilst Team USA captaincy appointments tend to be made on merit, there is more than a hint of the, ‘Old boy’s network,’ when it comes to who fulfils the role for the European team.

The biennial bash between Europe and the USA will inevitably boil down to which of the 12 players on each team performs best, individually and collectively, but key decisions made by captains, in the case of Europe (Thomas Bjørn) versus the USA (Jim Furyck) in Paris this month, may well influence the final destination of Samuel Ryder’s small gold cup.

There were more than a few collective European eyebrows raised when, back in December 2016, Danish golfer Thomas Bjørn was anointed Ryder Cup captain for the 42nd staging of the biennial event, a process about as transparent as the election of a new Pope, the European Tour stalwart granted a 22-month gestation period in which to get all his ducks in a row.
To his peers, Bjorn was widely viewed as ‘Mr. European Tour,’ a golfer of some repute – but some way short of greatness or legendary status – the long term chairman of the Tour’s influential Tournament Committee, as BBC Sport attested, ‘This appointment is due reward for his service to the Tour.’
Bjorn‘s experience from playing on three winning Ryder Cup teams could prove invaluable, and having been an assistant to past captains like Bernhard Langer, Colin Montgomerie, José María Olazábal and Darren Clarke, he will have gained a wealth of knowledge and inside information to take to Paris in 2018.

But, as most golf writers will tell you, the Dane can be a fully-paid-up member of the, ‘Awkward squad,’ known not only for ducking and diving from post round interviews when things have not gone his way, but also for an acerbic and sarcastic disposition when asked questions he does not like.
There are those who view the European Ryder Cup captaincy as something of an old boy’s club, a sinecure for sterling service to the European Tour, a number of credible candidates, such as two-time ‘Major’ winner Sandy Lyle, 1999 Open Championship winner Paul Lawrie and the evergreen Spaniard Miguel Ángel Jiménez amongst them.
Scotsman Lyle had been viewed as nailed-on for the European captaincy role in Wales in 2010, but was superseded by the opportunistic Colin Montgomerie – a man rarely shy when it comes to self-promotion and revenue-earning – who parachuted himself into the reckoning, leaving Lyle, deprived of a prestigious and strategically-important vice captain’s role by his compatriot, bitter and disillusioned.
“It was pretty much a below the belt type punch when I didn’t get the captaincy,” Lyle said, adding, “It just seemed a little unusual Colin should be appointed captain as it seemed to me, a forgone conclusion that I would win the captaincy,” said Lyle in the wake of his being overlooked.

And, another Scot, 1999 Open champion and two-time Ryder Cup player, Paul Lawrie, was regarded as a strong candidate for a backroom job on home soil at Gleneagles in 2014; however, European captain Paul McGinley (three appearances as a player, three victories) instead picked Pádraig Harrington, Miguel Ángel Jiménez and José María Olazábal to join Sam Torrance and Des Smyth as vice-captains.
Lawrie said at the time, “I’m extremely disappointed not to be involved at Gleneagles. I’ve known for some time my game wasn’t up to playing, but I thought I would have been involved in the backroom team.”
Late last year, European captain Thomas Bjørn announced that Luke Donald, Padraig Harrington, Graeme McDowell and Lee Westwood would join his original selection, Robert Karlsson to complete the European Vice Captain line-up for the 2018 Ryder Cup, no place for a Frenchman such as Thomas Levet or Jean van de Velde.
There are many, this correspondent amongst them, who believed that Irishman Pádraig Harrington, a three-time ‘Major’ champion should have been European captain for Hazeltine 2016, rather than the ill-fated, bungling Darren Clarke (another favourite in the European Tour’s inner circle) or, at least, captain ahead of Bjørn in Paris this month.
Bjørn’s leadership record is mixed; he suffered a heavy defeat leading a strong Continental Europe side against GB & Ireland in the 2009 Seve Trophy, but made amends in what is seen as the European Ryder Cup captain’s biennial dress rehearsal, leading Europe to victory in the EurAsia Cup earlier this year.

He is a fiery character, as evidenced by his bad-tempered response to being left out of the 2006 Ryder Cup team by the-then captain Ian Woosnam, and there are few golf writers who will not have been on the end of a caustic or corrosive rejoinder to entirely legitimate questions, hence doubts must exist over the 47-year-old Dane’s diplomacy skills when under the kind of pressure only the Ryder Cup can bring.
As a player, he was a Ryder Cup winner in 1997, 2002 and 2014, and has won 15 European tour titles and views his elevation to the 2018 captaincy as a badge of honour and, one suspects, a confirmation of legitimacy for a man with something of a thin skin.
“I have lived and breathed the European Tour for so long, and now I will do the same with the Ryder Cup,” he said on having the baton passed to him from Darren Clarke, arguably one of the least effective skippers in the Team Europe era, adding, “As captain, it’s exciting to see so many of them {European players] do well in big championships and winning golf tournaments. and pushing themselves to their limits that they have.”
“There’s 24 guys that are going to be very much close to the top of the World Rankings going to the Ryder Cup in France. That’s going to make for one hell of a Ryder Cup, concluded Bjørn, an avid fan of Liverpool FC.

Added to the honour of being appointed Ryder Cup captain, and despite the fact the role is ostensibly unpaid – a modest stipend is paid for the honourary position – Ryder Cup captaincy brings significant financial rewards which nobody at the European Tour is keen to talk about.
It is four-years since Bjørn last earned a seven-figure sum in on course earnings – his 2014 Nedbank Challenge win his last taste of victory – lucrative endorsement deals have been struck with longstanding European Ryder Cup sponsors Rolex and BMW – neither of which would be remotely interested in a player standing at 792 on the Official World Golf Ranking (OWGR) and 172nd in the Race to Dubai – will more than compensate the Dane from modest lost earnings and considerable time invested in the important captaincy role.
The most recent brand to seek to sprinkle stardust by engaging not only Bjørn but also opposite number Jim Furyk in a deal thought to be in the high-six to seven-figures is PowerTee, of which the Dane obligingly says, ““For anyone who is serious about growing the game of golf, Power Tee is the ultimate tool for engaging new players and helping existing golfers improve.”

Although no figures are available, estimates that the European Ryder Cup captaincy was worth financially, including endorsement income and appearance fees to headline big-money events such as the 2010 Volvo China Open and Volvo World Match Play Championship, (both alongside his USA counterpart Corey Pavin) brought-in in excess of US$2m to 2010 European captain Colin Montgomerie.
Thomas Bjørn says, “I studied a lot of captains as a player and as a vice-captain and always wondered what that feeling would be like to be the one leading out a team of 12 great players,” adding, “Now it’s my turn to do just that and it is an exciting moment for me,” and, as a proud European we wish him and his team well.

But whether the Dane transpires to be a successful Ryder Cup captain in the mould of José María Olazábal, Bernhard Langer or Paul McGinley, or akin to ‘Captain calamities,’ Faldo and Clarke, only time will tell, but, if searching for the identity of the man who will lead Europe into battle against the USA at Whistling Straits in 2020, look no further than Bjørn’s five vice captains.
Three-time ‘Major’ champion Harrington it must surely be, but look out for Westwood, the establishment candidate, seen to have served his time, toed the line, a man with the most unwanted moniker in golf, ‘The best player never to win a ‘Major,’ but a European Ryder Cup ever present since 1999, coming up fast on the rails.