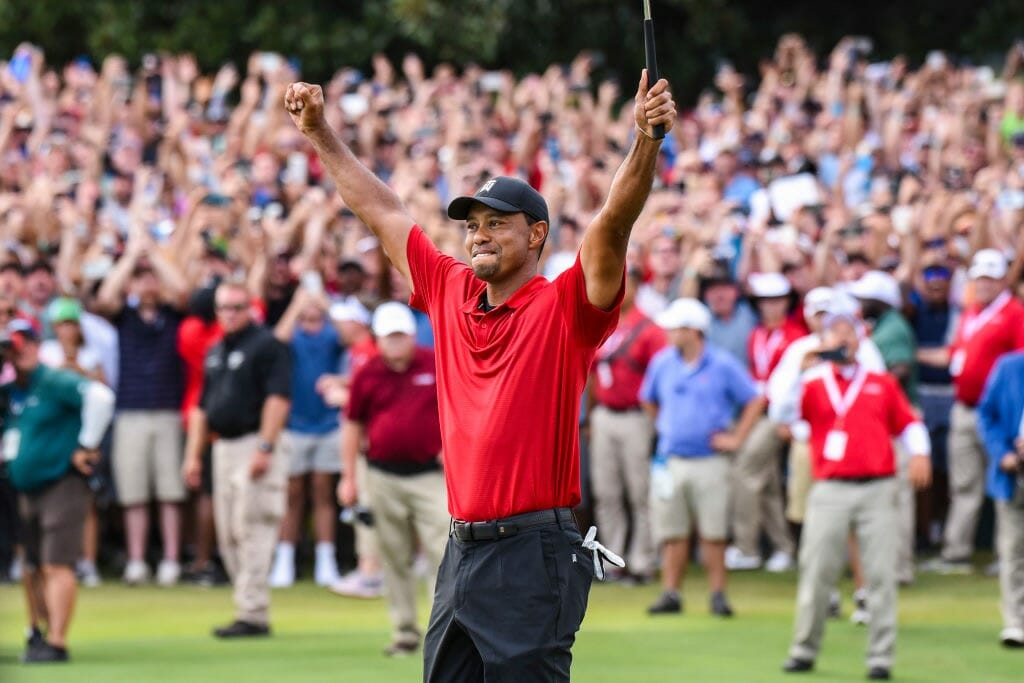 Woods traditional last round red shirt looked the brightest it’s been with a first victory anywhere in 1,876 days and it was virtually gift-wrapped for him by his rivals after he posted a closing day ‘no frills’ 71 for an 11-under par tally on the East Lake course.

Among those failing to mount any sort of a last day challenge was Rory McIlroy with the closest McIlroy got to Woods being an opening tee handshake before imploding in posting a 74 to finish in a share of seventh place at five-under.

Justin Rose, who had been tied in second place on nine-under par with McIlroy heading to the final round, holed a tap-in birdie on the 72nd hole to finish fourth and become the first Englishman to lift the FedEx Cup trophy.

Rose collected the whopping $10m bonus purse but in the process has dropped to World No. 2 having held the honour of No. 1 for just two weeks with Dustin Johnson returning to the top of the rankings in finishing third on seven-under par.

“To win it’s certainly up there with obviously all the major championships I’ve won, Players, World Golf Championships but then this is under different circumstances,” said Woods.

“But somehow I’ve been able to do that, and here we are.”

And in returning after four separate back operations, including revolutionary ‘fusion’ surgery last year, Woods’ win is already being ranked up there with efforts by the late, great Mohammed Ali, Jack Nicklaus and George Foreman.

Ali returned from a 43-month controversial Vietnam War suspension to go on to become the first Heavyweight to win three World titles.

Nicklaus was aged 46 in capturing an 18th Major, nearly six years after his 17th, and Foreman in 1994 became the oldest Heavyweight champ at age 45 in capturing his second title.

There had been amazing scenes as Woods walked the near 100-yard distance from the East Lake clubhouse, and virtually through a winding mobile phone guard-of-honour, before finding his way to the first tee.

He teed-up in his 346th PGA start with the record of having won 23 of 23 events when leading by three shots or less.

McIlroy was soon setting the tone of playing a supporting role after also bogeying the fifth hole and then after Rose, and in the group ahead, also bogeyed five Woods was now a remarkable five shots clear.

Woods headed to the turn still five shots clear of Rose in second but with McIlroy continuing to save some of his worst for the last event of the year after having to take a penalty drop following a wild drive right off the seventh tee ahead a second three-putt in his round.

In contrast, Woods looked content to take par and while he did bogey 10, he bounced back with a birdie on 13 only to give back the shot in just managing to carry the water at the par-3 15th and then chipping and two-putting for a second bogey.

Woods then sent a shiver into this massive following when he then bogeyed the 16th before steadying with a 71st hole par ahead of his victory walk down the last where he was mobbed by admiring spectators in scenes not seen for a very long time.

And it was clearly a very emotional victory for Woods.

“I was having a hard time not crying on the last hole,” he said.

“There have been a few wins here and there, but nothing to compare to crowds at that win at Hoylake in that regard, losing dad and the circumstances are very different. I’m not going to compare the two.  But I was pretty emotional when Rory (McIlroy) was tapping out, he was finishing out.”

“I looked around, and the tournament was over because I’d already put the bunker shot on the green, and I’d won 80.  80 is a big number.  I’ve been sitting on 79 for about five years now, and to get 80 is a pretty damned good feeling.”

Waiting for Woods when he finished were many of his fellow USA Ryder Cup players and with the full 12-man team along Captain, Jim Furyk and his six vice-captains as well as the dozen caddies leaving Atlanta Sunday night local time on a special charter flight bound direct for Paris.

“Yeah we’re flying tonight with the guys, it’s going to be fun,” said Woods. “I think we’re all going to sleep well (smiling).”

Mcilroy was obviously disappointed with his day but took to twitter to congratulate the champion.

Among those singing Woods’ comeback praises was former long-time arch rival Phil Mickelson who ended his round close to three hours before Woods in finishing last in the 30-player field shooting a closing 72 for a 13-over total and 24 shots more than Woods.

“He’s played such good golf all year that is just not surprising and it was  just a matter of time before won,” he said.

“Tiger’s played so well on a very difficult golf course and we almost kind of expected it and I also had no doubt, not with what I’ve seen and how he’s been swinging the club and the way he’s being playing.”

“We knew it would happen and, as I said, it was just a matter of time.”

And reigning European No. 1 Tommy Fleetwood, who played alongside Woods on day one in Atlanta, was just as impressed.

“It’s a great comeback story for probably the best golfer who has ever lived,” said Fleetwood after a closing 68 for a four-under total.

“Also, it’s pretty remarkable knowing where he’s come from giving the chipping yips, all the stuff going on off the golf course including four back surgeries.

“So, having overcome all of that and to again win, and win a limited field like the Tour Championship on a very big stage is quite remarkable.”

Next up for Tiger is this weeks Ryder Cup. 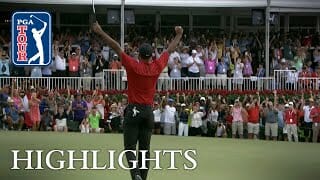