It just was not to be for Niall Kearney and John Ross Galbraith on an afternoon of late drama at the EuroPro Tour’s PREM Group Irish Masters at Tulfarris.

Galbraith, who started with a three-shot lead, was on the hunt for his maiden EuroPro Tour title but struggled to put a run together as he made the turn in 37, dropping back to -9 but still only a shot behind Niall Kearney and England’s Tomasz Anderson who tied for the lead on -10.

Of the three Kearney, looked to be the man to beat going out in 33 and looking in control on a blustery day in Tulfarris.
Ashley Mansell got in on the act and carded a final round of 69 (-3) to hold the early clubhouse lead on nine-under par, where he was soon joined by Mark Young, the pair setting the bar for Kearney, Galbraith and Anderson.
Anderson then made his move with birdies on 10 and 15 pushing him to -11 and a shot clear of Kearney and a key two-shot cushion over clubhouse leaders Young and Mansell standing on the 18th tee.
Drama struck late on however as Anderson found himself in a fairway bunker over 190 yards from the pin. Taking the bold decision to go for it, he struck his approach way left and flush to a clubhouse wall. Forced to play his shot left handed, he swiped it through the green and into a bunker and could only get up and down for a double bogey. It dropped him back to join Young and Mansell in the clubhouse on nine-under par.
Unknown to Kearney, he stood on the 18th tee with a one-shot lead with playing partner Galbraith just one further back.
Requiring at worst a par to win on home soil, Kearney pulled his approach and missed the green pin high left leaving the Royal Dublin professional an up-and-down to claim the title.

He raced the chip ten-foot past and then came up three-feet short with the par attempt for a win. 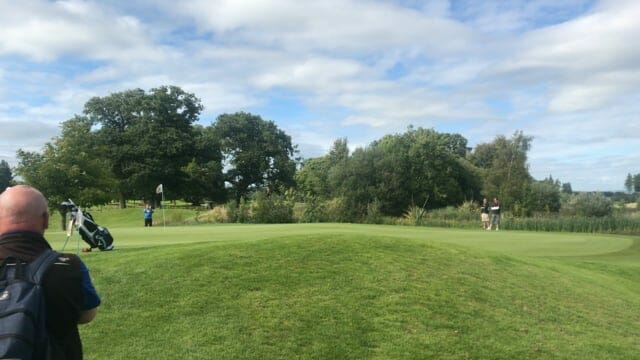 It left Kearney needing to hole out to join the playoff, but for a lip out, much to the horror of the home crowd and Kearney alike, meant he had to settle for a share of fourth, alongside Scotland’s Paul McKechnie and Galbraith who himself three putted the final green to miss the playoff by a shot.
“It’s just so disappointing to finish like that, I don’t really know how to sum it up at the moment,” reflected a devastated Kearney after the round. The Dubliner admitted that he wasn’t aware where he stood on the 18th tee and was just trying to finish strong.

“I didn’t know and didn’t really want to know where I stood coming up 18. I was stuck in the process and felt I was playing well so I wasn’t going to do anything different if I knew something different really,” he maintained.
“I hit a poor shot into 18 but ended up with a terrible lie with the grass growing into me just off the edge of the green. I felt I had to hit it a bit harder to get it back to the flag but it came out like a bazooka. From there I left myself a really tough putt back and it would have been very easy to hit it 6 foot past so I was just too tentative on it and left it a few foot short.
“The short putt I missed then was just a total lack of concentration,” he added. “It’s very disappointing”

It was an equally disappointed John Ross Galbraith as the rookie rued his three putt on the final green that scuppered his chances.
“I didn’t have my best stuff today but still gave myself the chance at the end,” said an encouraged JR.
“The overall emotion now is obviously disappointment but at the same time I could have let it slip away today but I dug deep, and come the 18th green I still had a chance to get myself into a playoff and even win it outright.”

In fact, unlike Kearney, JR knew exactly where he stood before he hit his approach to the final green.
“I knew before I hit my approach where I stood with Anderson having a double in the group ahead. I heard someone in the crowd talking about it as I reached my ball. I hit a lovely second shot into the middle of the green and it was an unfortunate way to finish with a three putt.” 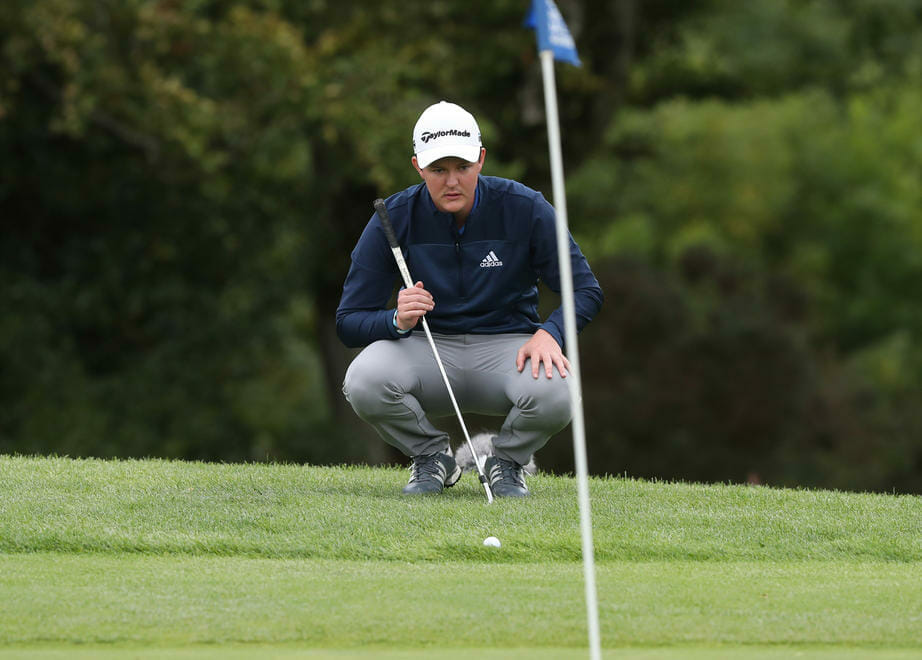 Yet despite the setback, Galbraith was already drawing on the positives from a very consistent rookie season on the EuroPro Tour.
“I am still learning and I know every time I get myself into these positions I will be the better for it,” he reflected.
“I have found something in my game these past few weeks and I am very confident about where my game is at now. I said at the start of the year when I turned pro that this year was a learning year for me and I am very happy with the consistency I have shown so far. I know my game is good enough to win out here and move up to the Challenge Tour and compete there too.”

Both Kearney and Galbraith shared the €500 on offer by us at Irish Golfer for the top Irish professional at the event, little consolation having just missed out on a €10,000 winners cheque. In a game of fine margins both only claiming €1750 each for a tie for 4th place having come so close to the title.

In the end, for the large home crowd gathered around the spectacular 18th at Tulfarris, it was a bit of an anti-climax as the all-English playoff involving Young, Anderson, and Mansell got underway. The playoff only lasted one hole as Mansell and Anderson could only manage to bogey the 18th to Young’s two-foot par as the latter claimed his third win of the season. 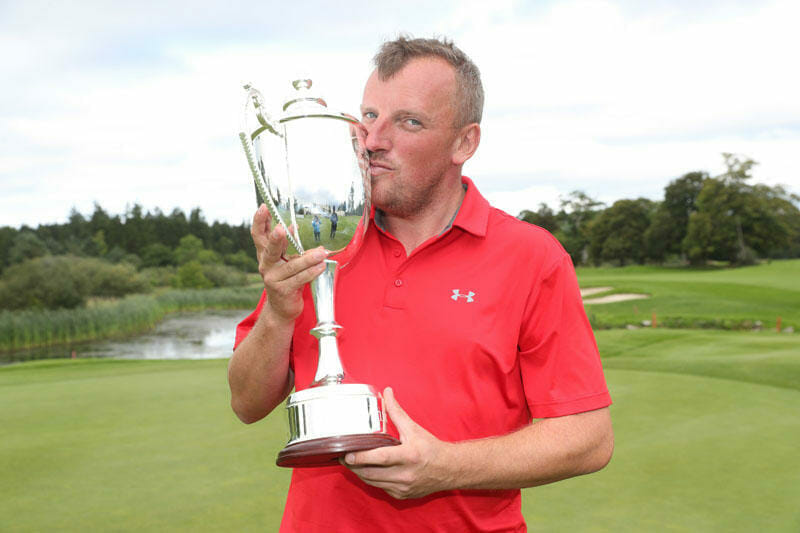 Reflecting on his hat-trick, he said: “It was an unexpected win if I’m honest, knowing where I was with two to play I thought I was going to be a couple short so, to get into the playoff was a bonus to start with.
“I hit two good shots [in the playoff] whereas the other two weren’t as fortunate, I took advantage of that and I’m delighted to get the win.
“I was playing with Anderson and he was unfortunate to land where he did after his bunker shot at the end, but pressure is an amazing thing at times.”

The win sees Young leapfrog the in-form Dave Coupland in the Race To Desert Springs back into the top spot, confirming his spot in the Challenge Tour next season, and also brings him to within one win of the coveted £250,000 four-win bonus. He said: “It sounds great, we’ll see what happens. It’s very difficult to win golf tournaments on this tour and I’ve been fortunate to win three, but I’m in a position where it is possible now to win the bonus.
“It would be massive to win the bonus, it would set me up for playing at the higher levels for many years, but I’ve not got there yet.”

Jim Murphy, CEO of PREM Group, said: “Congratulations to Mark on what was a fantastic win. There was some really high-class golf played out on the course over the last three days and to emerge victorious from such a competitive field following a thrilling playoff is very impressive. We are delighted to have hosted such a large number of top-class golfers at Tulfarris Hotel & Golf Resort, and I have no doubt that we will see many of them competing at the very highest level of world golf in the coming years.”

The championship course at Tulfarris was the biggest winner of the week with players full of praise for the set up and condition and looking forward to a return next August as part of the 2019 season.
“We got great feedback from many of the players who were highly complementary of the course” Added Murphy “Having played it during the Pro-Am event on Tuesday, I can only praise the brilliant staff here at Tulfarris Hotel & Golf Resort for having it in such pristine condition.”

Pat Barrett, Golf Business Development Manager at Tulfarris Hotel & Golf Resort, said; “I think Tulfarris has really announced itself on the European stage thanks to such a fantastic tournament this week. Many of the golfers were adamant that this course is European Tour standard, and to hear great reviews of the course from guys who have played on courses across Europe is fantastic. The standard of golf was amazing, the weather held up perfectly, and I think we can all reflect on what is a job well done. We’re already looking forward to hosting this tournament at Tulfarris Hotel & Golf Resort again next year.”