Top betting tips for this week at the Bridgestone WGC 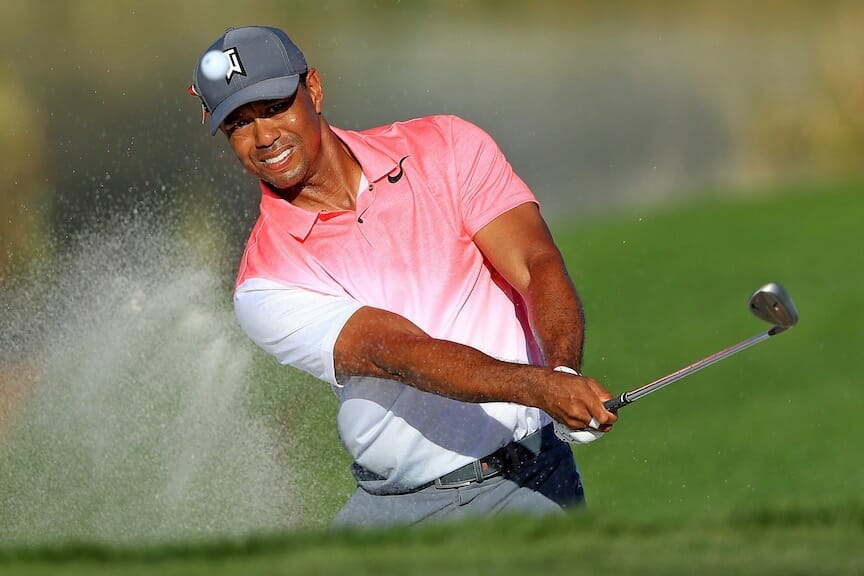 We don’t condone betting here at IGM but when the oracle’s marking your card we don’t consider it a gamble. Here’s our man’s take on the Bridgestone.

This year’s staging of the WGC Bridgestone has some added spice with Tiger Woods back in the field and the bookies are feeling a little hot under the collar with his odds now 12/1 and heading North. Woods’ record around Firestone is the stuff of legend to the point of winning injured in 2013. The growing worry is those nerves which overtook him when he led The Open but with all aspects of his game now looking good he’s an intriguing bet. Justin Rose may not have Tiger’s charisma but since winning in Fort Worth he hasn’t been outside the Top-10 in four starts (including the US Open and Open Championship) and also looks like a solid win-only bet from 14/1.

Adam Scott 66/1
On the face of it the last place you’d think to reintroduce your long putter would be on a windy links in a Major, but Adam Scott was back with his broomhandle in Carnoustie and you know what, I think his finishing T17 was an important sign that he’s on the up. The Aussie is far too talented to be languishing down the field for long and since winning here in 2011 he’s always had the guile to manufacture a respectable finish in Akron whatever shape his game’s in. With the greens set to run 12.5 on the stimp that broom will be tested but I think Scott will be a big surprise this week.

Henrik Stenson 33/1
Stenson’s Open was hampered by an elbow injury but he still managed three rounds of par or better around Carnoustie and with of couple of weeks to recover should be fit to go this week. The tees and greens in regulation requirement of Firestone play to the Swede’s strengths and in four consecutive top-20’s at the venue he has gone close in 2013 (T2) and 2015 (6th). Henrik is going under the radar in this stellar field this week (where every qualifier has declared themselves playing) and looks a great each-way bet especially if predicted rains come and take some sting out of the greens.

Rickie Fowler 20/1
However frustrating it is to watch Rickie Fowler flatter to deceive in Majors it must be doubly so for the man himself as he struggles with the “best player never to win” mantle.  This week so, albeit a WGC event, represents less pressure and less expectation for Fowler, and being that it’s always staged at Firestone helps him. He’s had four consecutive top-10’s in his last four visits and his solo 9th last year featured super stats across driving, irons and putting in addition to a cumulative -7 clip on the par-3’s. A win wouldn’t surprise me but a solid each way bet is more prudent.

Xander Schauffele 40/1
Xander at 40/1 looks a reasonable each way bet for Firestone after finishing T13 on his debut last year. He’s a year further on in his progression now with a Tour Championship won, a T2 at the Players, T6 at the US Open and T2 at The Open. The bookies will point to that nervy finish at Carnoustie and his propensity to also blow cold like missing cuts in Fort Worth, at the Memorial and Travelers. I think there’s enough there to give him a squeak.

Zach Johnson 40/1
Comes in off four straight top-20’s and I know Zach will be really fancying his chances of a big week. On the face of it a 7,400 yard par 70 shouldn’t suit a short batter, but he’s a great course manager who knows this track inside out. Solo second last year and has three more top-10’s since 2011. Will give a solid run for your stake.

Thorbjorn Olesen 70/1
T10 last year and Thor comes in with some great form after winning in Italy, T2 in Germany, T6 in Ireland and T12 last time out in Carnoustie. Not the straightest in the field but has a magical short game and is not afraid to mix it with the world’s best.

Charl Schwartzel 150/1
Showed better form in Germany last week (T9) and that might be just the boost he needs.  Streaky at best but two top-10’s in his last four Firestone starts and a T2 at The Players the last time he hit form makes him a nice each way flutter at 150/1 or “to finish in the top-10 bet.”