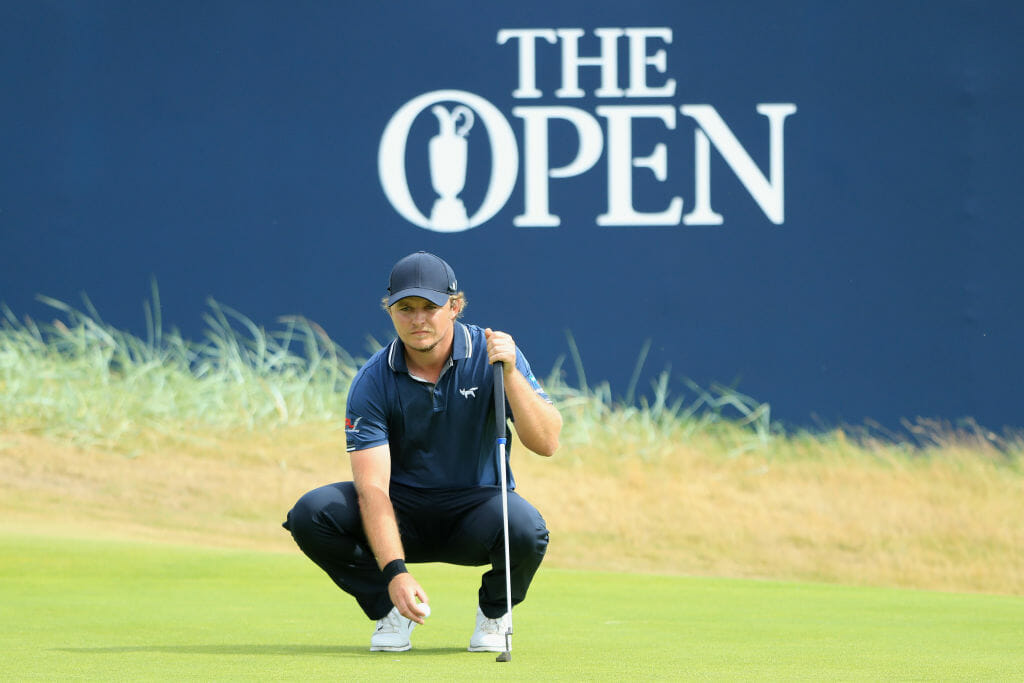 After admitting to playing his final round hungover at The Open, Eddie Pepperell has quickly become the world’s great hope.

2018 – The year a 27-year-old golfer from Oxford drank half a bottle of red wine, went to bed before midnight and woke up a rock star. Meet Eddie Pepperell, or Eddie Pepperell Spritz if you’re after something more refreshing in this heat. The Englishman has burst from the pack to become the most relatable golfer on tour overnight by openly admitting to playing the final round of The Open hungover. As the media gasped at his honesty, the freaks back home danced around their television screens chanting ‘Gooble Gobble One Of Us’ before drinking themselves into oblivion ahead of their morning tee times.

Yep, you heard it here first, Eddie Pepperell is a human being. Crestfallen from playing his way out of contention at his National Open on Saturday, the portly Pepperell popped open a bottle of fermented grapes and chugged it back alongside his coach like it was the summer of 1969. He woke up the next morning feeling worse for wear but his carefree approach to Carnoustie paid dividends; Eddie the eagle flying the flag as clubhouse leader after a 67 set the target at five-under-par.

Pepperell almost seemed vexed that he had to hang around so long when talking to the media afterwards; the barkeep at Carnoustie advising him that a playoff was a very real possibility after Eddie had ordered a triple vodka Red Bull to take the edge off the anticipation. A worried mother assembled amongst the media questioned in horror how a professional athlete could deem such behaviour acceptable, to which Pepperell replied;

“Listen, I wouldn’t always have a drink the night before, sometimes I’d have a few drinks…” before cutting himself off having caught a glimpse of the leaderboard. “Tiger minus-seven,” he pointed, pleasantly surprised. “He didn’t have a drink last night I bet. Proper athlete!”

It’s a reflection of the world we live in that Eddie Pepperell’s admission on Twitter had him trending at Trump levels on Sunday. There was a time when sporting heroes mastered their craft by day and shared a pint with their supporters by night but a digital age plagued by camera phones and privacy invasion spoiled the party for everyone. It’s a tabloid culture of scrutiny, the ‘those without sin write for the Sun’ brigade that have dehumanised our athletes and diluted their character.

Then there’s Eddie Pepperell, golf’s everyman, and what heartened me most about this whole non-story was the lack of blowback, the absence of criticism and the acceptance of Eddie the man. Life comes full circle, history repeats itself and maybe a trip to the local as opposed to the sports psychologist might prove the perfect tonic for struggling golfers in future.

Too much knowledge can be a bad thing they say, and no doubt too much boozing can be too, but whatever your poison a work-life balance is key and Eddie seems to have found his fix:

“Amazing what saying playing with a hangover does for your Twitter following,” he wrote after seven thousand worshippers had found their new leader. “Next year I’m gonna try the drugs angle!”