Clarke determined to leave European Tour on a high 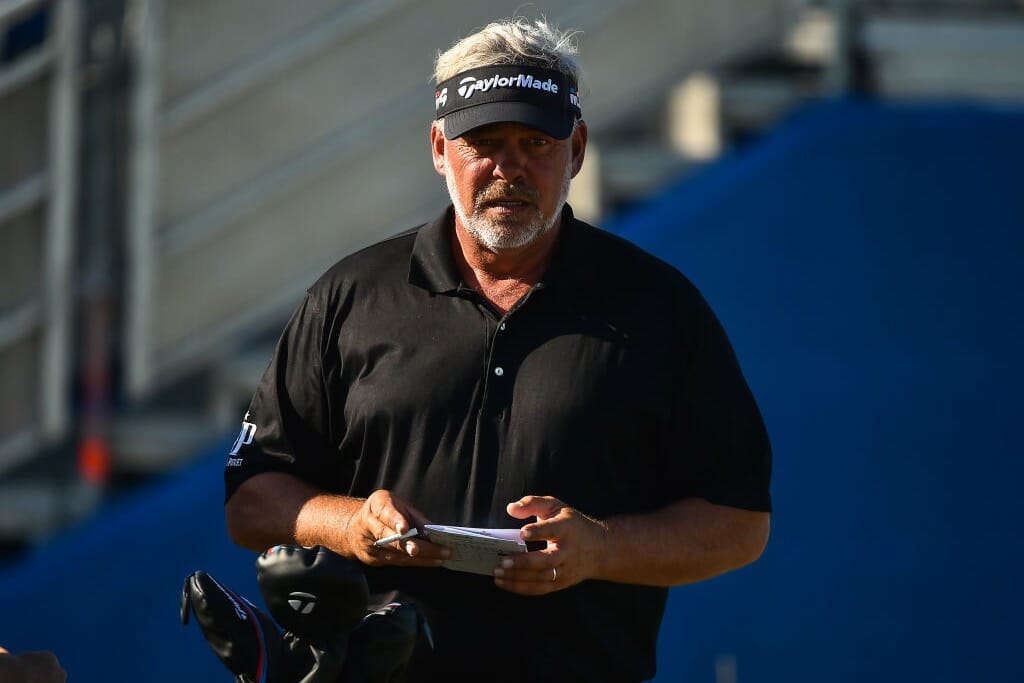 Former Open Champion Darren Clarke is hopeful of one last Tour high this next fortnight before making his senior’s debut later next month in remote Washington State.

The Open, with Clarke being handed the famed Claret Jug in 2011 at Royal St. George’s, will be his last European Tour event of the year before teeing-up in the August 24th commencing Boeing Classic in suburban Seattle as he becomes eligible to join the Champions Tour when he turns 50 on August 14th.

Clarke made his European Tour debut as 21-year old in the 1990 Irish Open at Portmarnock and this week tees-up in his 570th Tour event having made the halfway cut in 424 events. He has won on 14 occasions, none more special than the 2011 Open Championship and he’s earned prize-money of Euro 20.5m on the European Tour alone. If there is one golfing regret it surely has to be the 2016 Ryder Cup but then Clarke’s long put that behind him.

But before this new chapter in his career the Dungannon-born Clarke would dearly love to challenge this next fortnight.

“I’m no stranger to Gullane and Muirfield next door and it’s a great stretch of golf courses here in Scotland,” he said. “The second Open I played was the 1992 Open at Muirfield and while I didn’t play the Scottish when they were last here (2015) I just enjoy playing the courses here to the Edinburgh so much.”

“Lee (Westwood) and I also used to host a charity event some years back at Archerfield, so it’s an area I know very well. But then as many will know, I haven’t played an awful lot of golf of late and, in fact, so it’s nice to have true links courses like Ballyliffin last week and now Gullane and Carnoustie next week.”

“That’s not to say the competitive side of me has waned as it hasn’t and I am just as determined to do well or I wouldn’t be teeing-up this week.”

This week’s Scottish Open is only Clarke’s seventh European Tour event this season and the good news he’s at least made the halfway cut in three whereas he teed-up in a dozen events last year and never played four days in any. The number of starts will rise to eight when he tees-up in a week’s time at Carnoustie and while his career will always be tied to Royal St. George’s, Clarke says Carnoustie is the hardest of the courses on the Open rota.

“It will be a plus for the guys who played the Irish at Ballyliffin and those here this week at Gullane and heading to Carnoustie as, and from all reports, Carnoustie is just as firm and hard as the courses have been these two weeks already.”

“Obviously, I am teeing-up these three weeks wanting to play well but clearly my lack of competitive golf kills me a little bit at the moment as I made so many stupid mistakes last week, so we’ll see. But it’s links golf and you have to use the ground and know what you’re doing.”

Clarke indicated while becoming a ‘rookie’ on the US Champions Tour he will play the odd European Tour event.

“It will be a full schedule and it’s going to be interesting being a rookie again,” he smiled. “The thing is also I have been 60/70 yards behind these young fellas out here for a long time so I need a change and I am looking forward to getting out there and playing again and they will be all the guys who I grew-up with when I first came out onto the European Tour.”

And while Clarke may not have been seen all that often in Europe, he’s fully abreast of what is taking place regard the European Ryder Cup rankings, and was also spotted chatting on the Gullane practice putting green with Versailles captain, Thomas Bjorn.

“I speak to Thomas quite regularly about what’s going on and the European Team is looking really strong which is great,” said Clarke.

“And then being a European I want to see Thomas and his side win it back again.”

Padraig Harrington, a Versailles vice-captain, endeared himself to half-a-dozen Scottish-born ‘Special Olympics’ children in hosting an hour-long teaching session following playing in the morning Pro-Am. Two of the children will be headed to Abu Dhabi in March to represent the Home of Golf nation.

For Dunne, it’s about a second Tour victory this year ahead of heading to Carnoustie and for McDowell a second Scottish Open triumph. After winning at Loch Lomond in 2008, a good finish here could see him join his three Irish colleagues here this week in East Lothian next week in The Open.