Saturday 65 leaves McIlroy on the verge of history at Augusta

Rory McIlroy will tee it up in the final group of the 2018 Masters three shots behind leader Patrick Reed after a flawless moving day 65 at Augusta National.

The last time McIlroy played in the final group of the Masters was 2011 and we all know the scar tissue that final round has caused. Getting into a winning position at Augusta National has been his downfall ever since. In each of the past three years McIlroy has finished in the top-10 at Augusta, which sounds like a damn good effort chasing the Slam, but there is a disappointing truth behind the stat: he was never close to victory. Indeed, in the 11 majors he’s contested since his win in the USPGA at Valhalla, he has had six top-10s, three of those being top-fives, but he was never closer than five shots from the winner. On five of the six occasions, his last round was his best of the week.

Put another way, he only produced when it was too late. Not this year.

McIlroy may have rode his luck a few times in the third round, most notably on the fifth where his approach hit the lip of the bunker and still found the green leaving a 12 footer.  On the par 5 eight when he rattled the flag with his pitch that dropped for eagle.

“I rode my luck a little bit out there – the chip in on the eighth hole, finding my ball in the azaleas on 13. Then hitting the tree on 18 and coming back in the fairway and making a birdie from that,” said McIlroy.

“I’m closer to the lead than I was starting off the day, which is a bonus, especially when you see Patrick go out and shoot 67 and obviously play very well.”

McIlroy and Reed of course have some history. Just think back to the last Ryder Cup, but Rory will not get drawn into that on Sunday and even considers himself an underdog.

“I feel all the pressure is on Patrick, he is chasing his first Major and I am chasing something, well something else”.

That something else is history.

“Patrick has got a three shot lead. I feel like all the pressure is on him.  He’s got to go out and protect that, and he’s got a few guys chasing him that are pretty big-time players.  He’s got that to deal with that and sleep on tonight. I feel like I can go out there and play like I’ve got nothing to lose.” 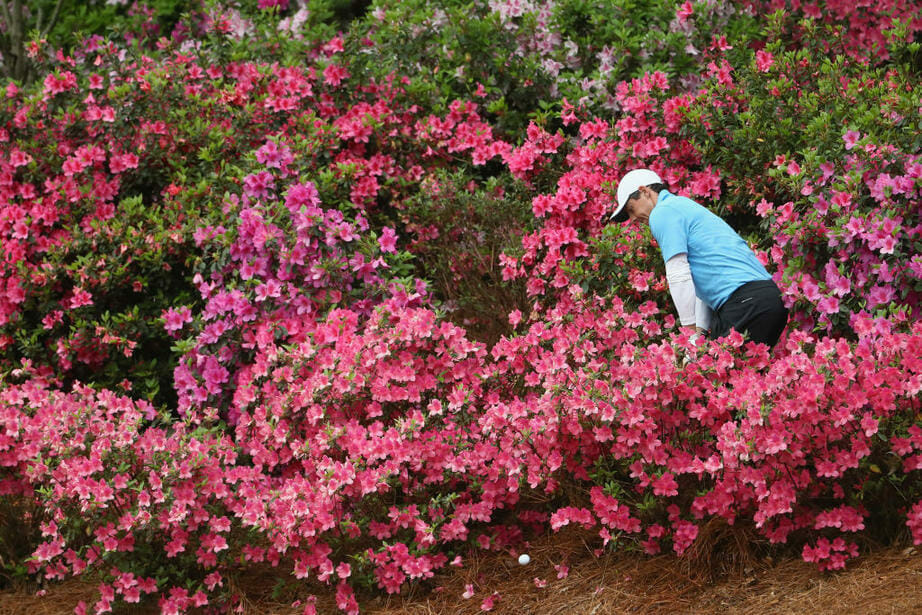 The four time Major champion will not get drawn into a man on man battle with Reed and is experienced enough to know anything can happen around Augusta National.

“It’s definitely not a two-horse race at this point. There’s a lot more players in this golf tournament than just Patrick Reed and I,” he added.

“Tomorrow, I’ll obviously know what Patrick Reed is doing, but apart from that, I’m going to set myself a target, try to get to that, and hopefully it’s enough.”

Turning in five under par for the day, McIlroy knew the importance of not giving anything away too keep up the pressure on Reed who was setting a fast pace.

“Yeah, I relied a little bit on my short game today. The birdies dried up after that eighth hole for a bit. I gave myself a couple of decent chances on 10 and 11, but the up and down on 12, 13, even the lay up on 15 and getting that up and down for birdie, I relied on my wedges and my putter, that’s huge for me going into tomorrow, being able to get it up and down when I need to. I’m thinking well and I’m in that mind set where I can trust my short game, I can trust missing greens and getting it up and down”

The Holywood man would be the sixth man to complete the Career Grand Slam in the modern era, joining an illustrious list of Jack Nicklaus, Tiger Woods, Ben Hogan, Gary Player and Gene Sarazen. It’s an incredible feat that legends Walter Hagen, Sam Snead, Tom Watson and Arnold Palmer never achieved. If Rory does it this year, he’ll be the second youngest to complete the Career Grand Slam – just over a year older than Woods.

In 2011 we could taste an Irish victory as McIlroy had one arm in the sleeve of the green jacket when he led for the first three rounds before a disastrous back nine on the final day, carding a closing 80 that condemned him to 15th place. Logic would dictate that it is merely a matter of when, not if, McIlroy will add a green jacket to his wardrobe but will today be the day he makes history and completes the career slam?