The 47-year old Mickelson snared seven birdies and none better than a 20-footer at his 70th hole in a round of five-under par 66 for a 16-under par tally.

Thomas, and winner of last week’s Honda Classic, moments earlier had the crowd roaring with delight when his 120-yard approach shot at the final hole spun back into the cup of in a round of 64 and with Thomas producing the lowest closing 36-holes in WGC history after a day earlier signing for a nine-under par 62 for the 24-year old to be 16-under for the weekend and this after being level par for the first two rounds.

England’s Tyrrell Hatton again let his emotions clearly get the better of him to miss out on the play-off by a shot after taking three shots to get up-and-down from the edge of the green at the last for a very sloppy bogey in a score of 67 and to end tied at 15-under with Spain’s Rafa Cabrera-Bello.

Cabrera-Bello began his quest for victory with birdies at his first and second holes and then also back-to-back birdies at 15 and 16 in his closing score of 66.
Sadly, there was no fairtale ending for 21-year India-born sensation Shubhankar Sharmar who let slip his two-stroke overnight lead to shoot a score of 74 and eventually settle for a share of ninth place on 10-under par.

And while Sharmar was looking to become the youngest winner of a WGC Mickelson is now the oldest in capturing a 48th pro career win and a 43rd on the PGA Tour, and with victory being Mickelson’s first since clinching the 2013 Open Championship at Muirfield.

Mickelson also shared a first victory with his younger brother, Tim carrying his Callaway clubs.
Bizarrely, Tim Mickelson caddied for his five-time Major winning brother a year ago after regular caddy, Jim ‘Bones’ MacKay was forced out ahead of the second round with severe food poisoning, and also just months before Mickelson and ‘Bones’ parted after 25-years together.

“It has been a tough go the last four years or so without playing my best and to have the belief I was going to get there and finally break through and do it feels incredible,” said Mickelson.
“I believe more is to come and I am starting to play my best golf, and to culminate here in Mexico City with victory in a World Golf Championship is exciting beyond words because it just validates the hard work I have put in and the hard work the last few years to get my game back.”

While it was Thomas who ignited the fireworks, it was Mickelson who went so close to winning without a play-off after his 22-foot birdie putt on the 71st hole stopped just inches short of the cup.

But then it was Mickeslon who eventually claimed victory at the 17th and the first extra play-off hole in winning with a par after Thomas conceeded victory to his opponent and electing not to putt out.

The win is Mickelson’s fourth WGC crown and a first WGC success since capturing the 2009 WGC – Champions event in Shanghai.

And while delighted to again taste victory Mickelson’s burning passion remains success in the U.S. Open and the one Major triumph, and after six U.S. Open second place finishes, he requires that would hand him golfing immortality with membership of the ‘Grand Slam’ club.

“The things about this game is that I just love the challenge and I could not have pulled off this victory without the support of my coach, Andrew Getson who has really helped me get my swing back along with brother who has done a phenomenal joy as my caddy, and the support of Callaway who have provided the equipment and support system in what has been a tough time as they have stood with my through the good and the bad,” said Mickelson.

Mickelson’s win has lifted him up to 18th in the Official World Golf Rankings and to third on the FedEx Cup Play-Off standings and is a huge boost in his goal to qualify automatically for the USA Ryder Cup team.

Hatton once again has seemingly let his emotions cloud a chance at glory and just over a year since he let slip victory in the Honda Classic also with a similar public outpouring of disappointment.

If there’s any comfort for the 26-year old High Wycombe golfer, it is that he could move inside the world’s top-10 for a first time in his career.
Justin Thomas was obviously disappointed after losing the playoff but remains positive as he closes the gap on Dustin Johnson on the world rankings “I’m definitely disappointed” Said Thomas. “ I wish Phil’s putt just would have gone in so I would have felt better about myself.  But I was a little pumped up and the gap wedge went a lot farther than I thought it was going to.  But man, there’s nothing for me to hang my head about.  To even have a chance to win this golf tournament after where I was through 18, through 36 holes, I’m very proud of myself.  I think it’s the most maturity and kind of poise I’ve shown in a tournament I’ve ever played.”

It was a disappointing week for Paul Dunne as he closed out the week with a level par 71 to finish back in a tie for 53rd. 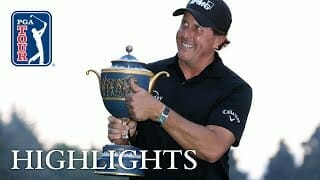