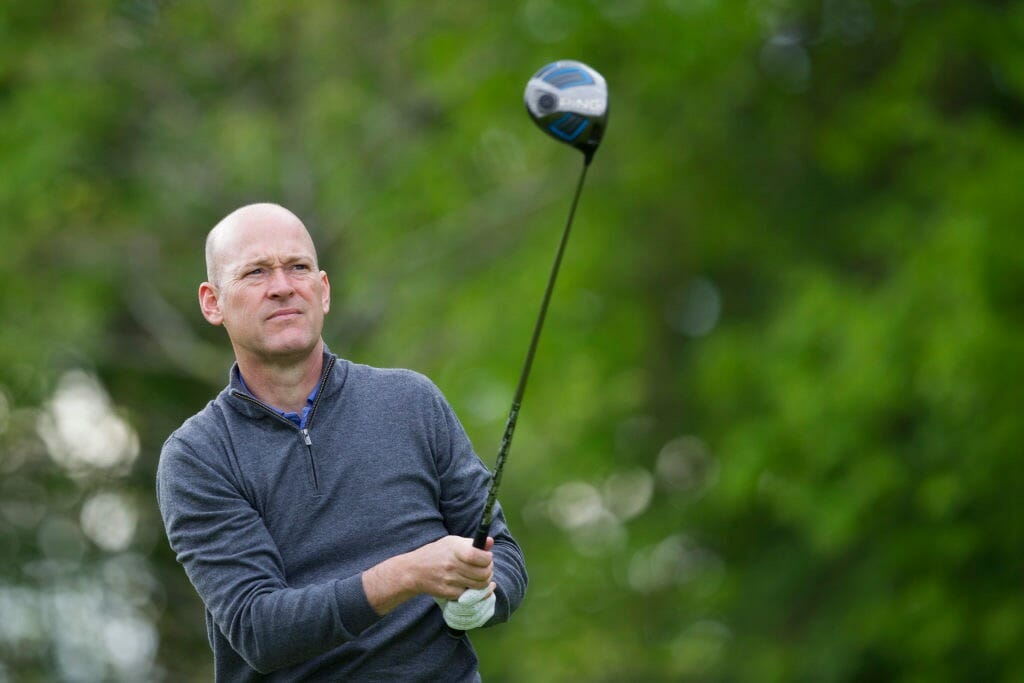 Jimmy Bolger was just one of many players who struggled to get to grips with the Vale da Pinta course at Pestana Golf Resort on day one of the Staysure Tour Qualifying School Final Stage.

Bolger returned a four over par round of 75 as just six players broke par on a windy day in Portugal. Having opened with two successive birdies, the Kilkenny man’s struggles began with a bogey on the 3rd. Two more followed on 5 and 7 before his woes were compounded with a double on 8, his qualifying hopes hanging in the balance early.

He steadied the ship around the turn and a birdie on 12 was a welcome bonus. However, two more bogeys were to come on 14 and 17 and with just five Senior Tour spots up for grabs this week, he’ll need to go low tomorrow to feature in that bracket.

Leading the way after 18 holes is former European Challenge Tour winner Mats Hallberg who holds a one stroke advantage in Portugal after carding a four under par first round of 67.

Winner of the Jede Hot Cup and Stiga Open on the Challenge Tour in 1991, with both victories coming in his native Sweden, Hallberg is playing in his first Staysure Tour Qualifying School since 2015.

The 53-year-old, who started his round from the 10th tee, birdied the 16th and 18th holes to make the turn two under par, and then made consecutive gains on the 1st and 2nd holes to move to four under.

A bogey on the par three third hole was cancelled out by his fifth birdie of the day, on the par four seventh hole, to come back in 32 shots for a one stroke lead ahead of England’s Mark Booth.

“I was lucky at the times when I needed to be lucky,” said Hallberg. “I took advantage on the easier holes when they were downwind.
“I don’t have any expectations going into this week. I’m surprised I’m top of the board at the moment.

“I’ll be drawing from my experiences on the Tour when I was in contention, but it’s been a long time since I stopped playing. I need to keep playing my game, with my tactics, and not rush myself if I get into trouble.”

Booth, who made it to Final Stage in 2017, started his round with a birdie on the first hole and then birdied the 9th to make the turn two under par. He then birdied the 12th and 14th holes, but found a fairway bunker on the 18th hole, and was forced to settle for a bogey.
“Coming through First Stage was tough, it was really difficult out there last week,” said Booth. “Today it was similar, the greens were tricky and you had to pick your spots. It’s that sort of golf course, if you’re out of position you will get punished.”

“I was really unfortunate on the last hole, I hit a good tee shot but didn’t quite fly the trap and went into the bunker. Apart from that I was flawless.”

“I’m playing well enough, there’s no reason I can’t be up there at the end of the week. I’m looking forward to it.”

England’s David Shacklady, who missed out on one of the five coveted cards after losing in a play-off at last year’s Final Stage, is two strokes behind Hallberg on two under par.

After Wednesday’s third round there will be a cut, with all players within eight shots of fifth place making it through to Thursday’s final round.