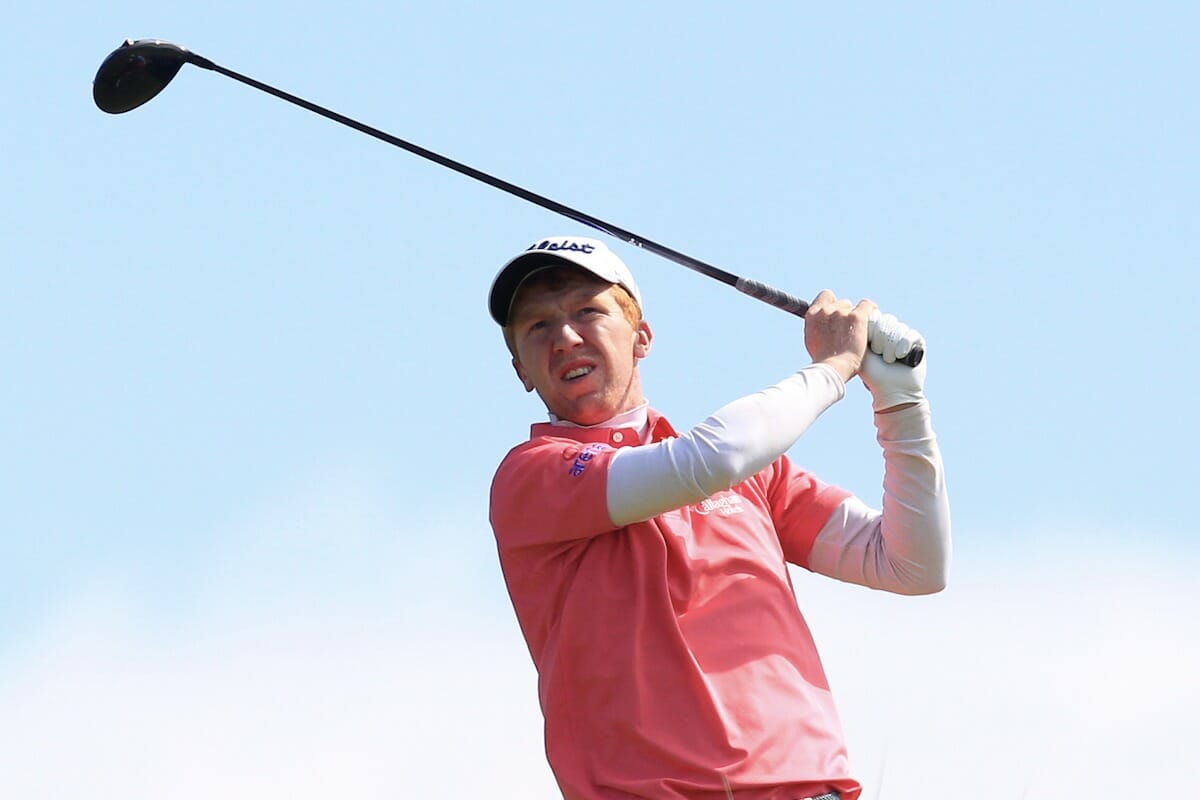 Gavin Moynihan has started his bid to become a fully-fledged European Tour member in fine style with an opening day 70 at the season ending NBO Golf Classic Grand Final in Oman.

Currently in 18th position in the Order of Merit standings, Moynihan knows that a top-7 finish outright or better should be enough to take him into the top-15, thus securing his golden ticket to the big time next season- and he’ll be quite happy with his round today after an inauspicious start.

Gavin had talked to us pre-tournament about his frustration with the number of bogeys he was amassing of late, and his resolve was immediately tested with consecutive dropped shots on holes 2 and 3.

But he also spoke to us about a new attitude that he has brought to his golf game, the key to his success for much of this season:
“The question after the Irish Open [where he finished tied-14th at the K-Club] was, ‘where has this form been?’ – it’s been there, but I’m just enjoying it more now – I’m free-wheeling this year.

“Even after my five-over in China, like I was fuming for twenty minutes but then I got on the plane to Dubai and I was happy out. A few years ago that would’ve pissed me off for days but this year the attitude has been right and I’ve moved on to the next challenge.”

In this instance he moved on quickly too with successive birdies on 7 and 8 wiping the slate clean as the Dubliner made the turn in 36 strokes.
He had talked-up the need to drive it well at the Al Mouj track and with his ball now finding the short stuff he began to give himself chances.

A second two on the round, this time at the par-3 13th got Gavin into red digits for the first time in the tournament, and though he gave that one straight back at the next, he picked up further gains at 16 and 17 to sign off on a round of 70, currently sitting at two under par and in a tie for 16th.

Four players share the lead after the first round of the Grand Final after an action-packed opening day in Oman.

Australia’s Nick Cullen, Sweden’s Oscar Lengden, Argentina’s Estanislao Goya and Poland’s Adrian Meronk all signed for five under par rounds of 67 to put themselves firmly in contention for a place in the top 15 on the Road to Oman – who will earn European Tour cards at the end of the week.

Meronk, who narrowly missed out on a maiden European Challenge Tour title at last week’s Ras Al Khaimah 2017 Golf Challenge after losing in a play-off to Jens Dantorp, has now gone 36 holes without a bogey after a blemish-free score today.

Lengden and Goya, who arrived in Muscat in 20th and 23rd in the Rankings respectively, have both won on the Challenge Tour this year and will be looking to pick up more silverware this week.

Cullen started the day in 33rd place in the Rankings and, as things stand, would claim the 15th and final card on Saturday.

Also impressing in Muscat was Aaron Rai, who continued where he left off on his return to Challenge Tour action by carding an opening 68 to sit one back after 18 holes.

The Englishman secured European Tour graduation with three early-season wins on the Road to Oman, and during his first Challenge Tour round since July he bagged five birdies and a bogey to reach four under par.

The 22 year old has gone on to flourish on the European Tour since graduating from Challenge Tour ranks, recording two top-ten finishes in Denmark and Valderramma in the 2017 Race to Dubai.

“It was great out there today,” Lengden said. “I have had two rough weeks on the road so it was really important for me to go out there and play well today.

“It has been a really good year for me – winning the Bridgestone Challenge was huge. That gave me a lot of confidence and I hope that experience will help me out this week.

“It is a great track here and is definitely one of the best courses that we play and I really like it here. You need to play well out there as if you are just a little bit off then this course can hurt you.”

“I played really solid today,” said Cullen. “Although I dropped one at the last it was a really good round in what is a really important week for me.

“Although I have played in Majors and WGCs I don’t think that any of that will help you this week. The pressure is huge and there are a lot of really good players – lots of young guys coming through – so it is really tough out there and I am just trying to play as well as I can.

“I have been really consistent this year, something that I have been throughout most of my career, but I have gone three seasons without a win. I am desperate to return to the winners’ circle and this week would be the perfect time to do it.”

“It is a pretty tough golf course – you have to play really well, especially around the greens,” Meronk said. “It was a little bit calmer this morning but when the wind picks up it is really difficult out there.

“Hitting a lot of fairways was the key for me today. Because I was good off of the tee I was able to attack the pins and I also holed a few good putts – so overall I was very solid today.

“Last week was a great one, the best of my career so far, and hopefully this week will be another good one for me.”